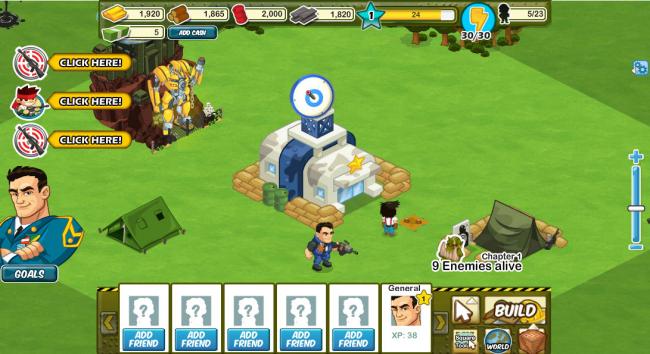 How else would you protect your planet from Space Orcs?

Virtual wars are the fuel that feed gaming fires. We simply can’t seem to get enough simulated combat. Of course, nothing’s better than sharing destruction with friends, and Social Point has answered the call with Social Wars for Facebook. Is this military adventure worthy of a medal, or will players find themselves in a futile conflict?

Social Wars is a marriage of real-time strategy (RTS) and city management wrapped in a tongue-in-cheek presentation akin to Army Attack. Orcs from outer space have invaded Earth, and it’s up to you to defend mankind. Social Wars‘ boot camp is made easy by fun missions that cover all the basics of gameplay.

You’ll begin your assault on the alien horde by building necessary structures – a base, training facilities, etc. – and before long you’ll be sending troops to the front lines to steal back terra firma. The progression of play is similar to Warcraft, in the sense that you’ll direct worker units to gather resources whilst continuing your campaign against the enemy. However Social Wars also follows a formula of a city building simulation, allowing you to take on the adventure at your own pace.

Resource veins litter the battlefield, with resources replenishing over time, and you’ll use energy each time to execute an action in the game. Leveling up is similar to CityVille, with in-game cash also serving as the premium currency.

Social Wars is immediately endearing with its brisk pace and steady flow of entertaining missions. Unfortunately, technical issues hold the game back from its true potential. A.I. pathing is in dire need of repair, and gathering units has been dumbed down a bit too much. You can either select just a single unit or all units (with a double-click of the mouse), with no options in between. 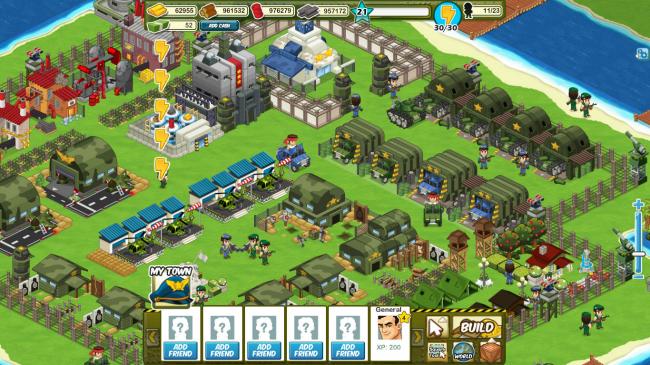 Slowdown was also a major issue during key points in the game, and often units wouldn’t respond at all due to input lag. In one skirmish, I lost my entire company of foot soldiers because my tanks – armed to take out towers – simply wouldn’t respond to my commands.

In spite of the game’s problems, I still found myself having a lot of fun with Social Wars. There’s ample room to tackle the game in various ways, and the combination of casual fanfare and RTS tropes make for a surprisingly enjoyable experience.

Social Wars also benefits from a fun, lighthearted visual presentation that pays homage to some of gaming’s favorite franchises. Chibi soldiers marching to the backdrop of overly dramatic musical themes is nothing short of hilarious. The overworld starts out somewhat barren, but as you progress through the game you’ll enjoy a fairly deep and satisfying adventure.

With its tasteful lampooning and irresistible partnering of social gaming and real-time strategy, Social Wars ultimately comes up victorious. Dumb A.I. and other technical flubs make it impossible to recommend the game without caution, but if you’re up for some silliness on the battlefield, Social Wars is well worth checking out.