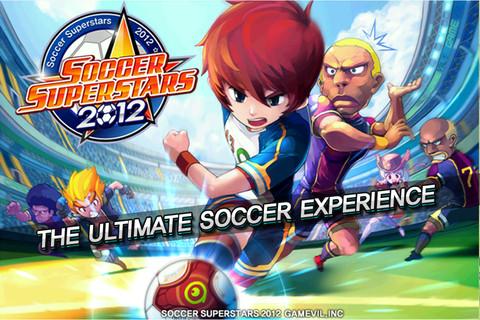 I’m not a soccer fan myself, so my vague hope was that Soccer Superstars 2012 would keep it simple, with some running, some kicking of the ball, and maybe the option to spend a bit of money to make the goalie a little less useless. But no such luck. I knew I was in deep when the tutorial went on, and on, and on… and on. Not unnecessarily, mind you, and it wasn’t digging down into the nitty-gritty details by any measure. There’s just that much material to cover.

The truth is that most of it went over my head, and my eyes kind of glazed over for the rest. I have a suspicion that the sheer volume of information will drive most people to do what I did: tap-tap-tap through the tutorial, and then figure it out on the fly. The good news is that the basics of putting a team on the field and kicking the ball around a bit aren’t all that complicated, and two different game modes, “Total Play” and “Chance Play,” mean that even novices can experience some degree of success.

In “Total Play” mode, you’re in charge of everything that happens. You’ll play out the entire game, start to finish (although the matches actually take only a few minutes of real-time), switching players as you go. You’ll control all the running, passing, shooting and everything else that takes place on the pitch, both offensively and defensively, and because of that greater degree of interaction and control, you’ll earn more points for a victory than you will in “Chance Mode.” 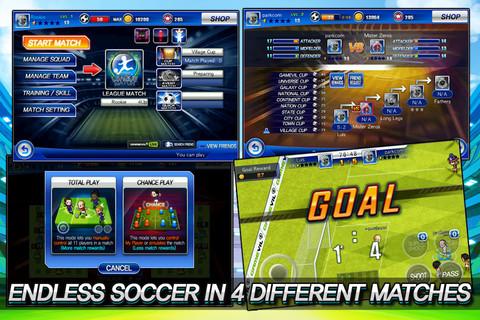 In “Chance Mode,” games are entirely simulated, except when your personal player – an avatar you create to represent you in mano-a-mano situations – has a scoring chance, at which point it pauses and drops you onto the field to make your move and take your shot. It took a few tries to get used to it, but it’s actually a very effective way of giving players a taste of the action without forcing them to play an entire match.

That might sound a little silly – after all, why play Soccer Superstars 2012 if you don’t want to play soccer? – but there’s quite a bit here for those who prefer the action of the front office, too. You can hire and fire staff members like the team doctor or strategist, handle ticket management, sell field-side advertising, set player and team strategies, draft players, upgrade their skills, treat injuries, resign contracts or release under-performers, and even combine two players to make one different, better player. It borrows a lot from sim. games and benefits all the more for it. 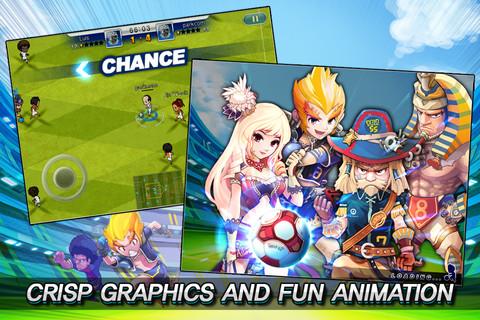 And in case that last bit isn’t enough of a hint, no, this game isn’t 100 percent realistic. Each team has a “super player:” a pirate, a sexy demon named Lulu or an ancient Egyptian Pharaoh, for example; each of whom brings dramatically increased abilities and unique powers to the game. Jack the Pirate, for instance, has a special shot in which he transforms into an 18th-century cannon and fires the ball into the net. There are also quests, which award gold and experience points for accomplishing various tasks. Think of it as soccer, a la Gamevil’s typical anime bent.

Yet while Soccer Superstars 2012 is detailed and colorful, it suffers a bit from data overload. The interface is reasonably clean, but there’s just too much going on for a conventional mobile screen; on a tablet it might be fine, but on a phone it’s awfully cramped. I don’t know if there’s anything that can be done about it, given all the numbers and options that are being thrown around, but it’s a lot to deal with.

On-field controls are a bit better, but still not perfect. The game uses a virtual thumbstick in the bottom-left corner of the screen to direct player movement and a pair of multifunction buttons/sliders in the bottom right that trigger kicking, passing, tackling and other moves. It’s functional but a bit clunky, if only because it’s so easy for the thumb to slide off the “stick,” although like all things it does get better with practice. I can’t say that I ever grew especially comfortable (or competent) with the controls, but I at least reached the point where I could move and shoot with some degree of confidence. 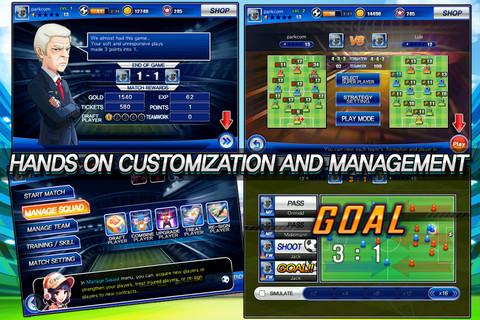 There’s a very minor current of mangled English underlying the whole thing – you’ll be greeting with a “welcom back” message every time you start the game – but nothing too overly distracting and certainly nowhere near as terrible as some games I’ve seen. And of course some of the more advanced elements of the game cost money, although the in-game “gold” used to pay for things can also be earned, slowly, simply by playing.

I don’t think there’s anything in Soccer Superstars 2012 that will make a non-fan into a true believer, but as full-featured soccer sims you can carry in your pocket go, this is a really good one. Footie fans should definitely give it a kick, not a pass.