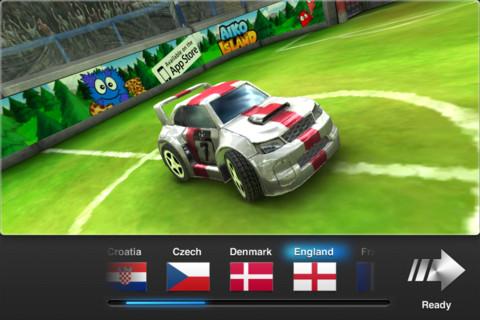 A failed drive to the goal

If you were looking for a game to exhibit what riding on coattails looks like, you could in theory point definitively at Soccer Rally: Euro 2012. The European Championships is a pretty huge deal, and second really only to the World Cup in terms of soccer spectacle. So it would make sense that a game would like to align itself with that particular event. But, if you want to ride the popularity of something the world loves, you really need to try and make something those people will want to play.

Soccer Rally: Euro 2012 is a soccer driving game. It takes place in an enclosed arena, sort of like a hockey rink. You’ll drive a car around this arena trying to knock a soccer ball into your opponent’s goal while they try to do the opposite. I could compare it to a foosball game, but the cars aren’t attached to anything and there’s only the two of them on the field.

My first tip off that this might be a quick cash-in is that the “Euro 2012” part of the title never actually appears in the title screen or anywhere else in the game, just the App Store title. No logos, stadiums, other markers. Clearly unaffiliated.

The ONLY reason you might assume some connection is that the cars are painted up as the flags of the participating European countries. That’s it though, just a paint job. Pick a paint job to represent your favorite country. Every car has the same body type and makes the same droning engine noise. They don’t have varying stats or abilities or anything like that. Just a different skin.

It’s already a bit of a stretch to make a Euro 2012 soccer game using cars, but I’m certainly willing to forgo logic and have fun with it. That of course requires the game to be fun… which this most certainly isn’t. It’s one-on-one, so you’re sort of just bumping the ball around the arena with the front bumper of the car, hoping for a lucky bounce. Over and over.

I found that since there’s no goalie or any other obstacles to contend with it only took me a game or two to figure out that each goal usually came down to who hit it better when the ball drops in the center to start the match. You could typically score if you just slammed into the ball and got a lucky bounce. And since nothing about the game setup ever changes, this never stops being the case.

The controls are boiled down to a left/right arrow and a gas pedal. They mostly work, but the car seems to rotate more than it actually turns, so you never get a good sense of speed or cutting corners. Not that there’s much real estate to work with. I was initially ok with the controls until I was right in front of the ball and just needed to tap it backwards for a goal and, alas…. no reverse. Time and time again I found myself in a spot where I really could’ve used a way to back up and there’s just nothing there. It limits a limited game even more.

There’s a multiplayer mode, which I was hoping would add more cars to the mix. Sadly, it doesn’t. It’s local and puts controls for two cars at opposite ends of the screen so the iPad lays on the table. It works. Oddly enough in this setup they remove the pause button from the screen, so it’s impossible to stop the action or quit out. I had to return to the iPad home screen and shut down the app to quit back to the menu. 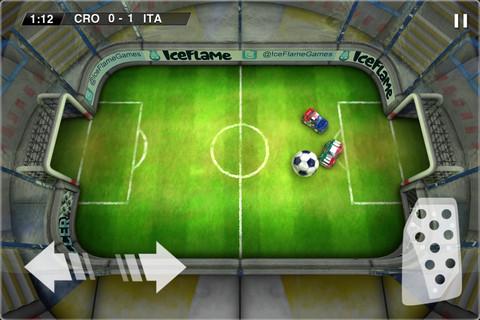 You can do a quick match or a tournament modeled after the Euro’s. You’ll play through group stages and elimination games to try and be champion. From match to match, nothing ever changes except the paint jobs on the cars. Always one on one, always the same cars (different colors notwithstanding) same sounds, same lackluster gameplay.

The game has an ok framework, and cars driving around an arena playing a weird sort of foosball CAN work (I loved it in the XBLA game Mad Tracks). But Soccer Rally: Euro 2012 needs something, anything, to shake it up a bit. Cars to unlock, different arenas, different balls, more game modes, more cars on the field…. something. As it stands it’s a one-trick pony, and just doesn’t entertain. Maybe some more time in development instead of rushing to piggyback onto the Euro tournament would’ve been a better choice.