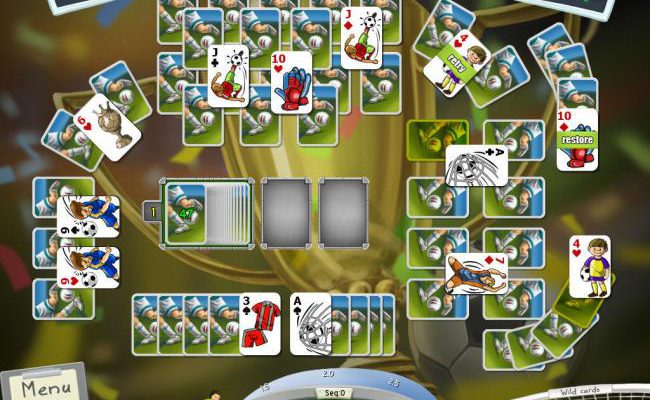 The FIFA World Cup comes around every four years, and it’s no surprise that a whole host of football-related merchandise and products follow it – some a little more unusual than others. Soccer Cup Solitaire is definitely a strange arrangement, mixing the classic pair-matching card game with “the beautiful game.”

While there are a couple of niggles here and there, Soccer Cup Solitaire incorporates the ball game smoothly into proceedings, and proves to be addictive and accessible for any age group. 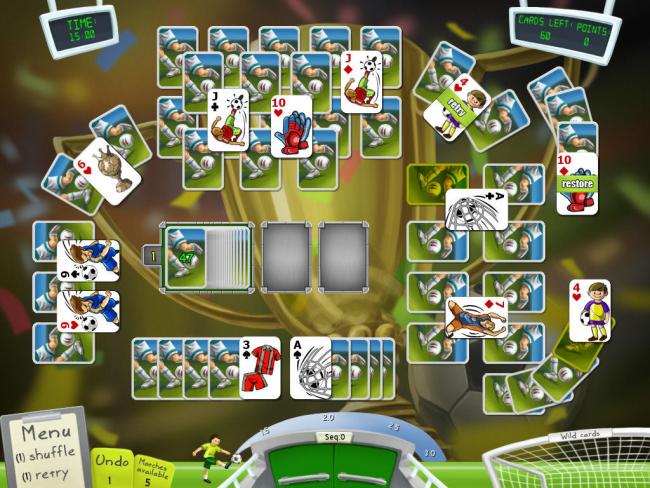 Players take control of an international football team in a tournament with a layout similar to the World Cup. The group stage must first be battled through, then it’s into the knockout stages leading up to the big final. Rather than playing soccer, however, each match is decided by matching pairs of playing cards.

As cards are matched they are removed from play, with some revealing other cards to play with. Each pair adds to your score, and if you bag enough points you’ll be awarded a goal. When there are no more matches to make, a deck of cards can be rifled through to find the cards you need.

Every part of the game is given a relationship to football. Each pairing is called a pass, and cards from the deck can be placed down for later as a substitution. Make your way through the entire deck, and the offside rule comes into play, allowing you to flip it over and start again. 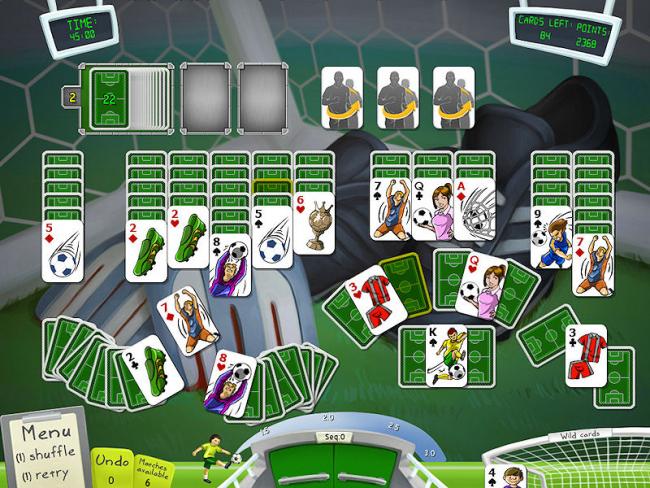 It’s all been cleverly thought out and really gives the game a lot of personality. There’s even a commentator who will give feedback every now and again on how the match is progressing, shouting and raving every time a goal is scored.

There are various methods to achieving a high score and therefore more goals. After matching a pair, if your next pair is of the same number, or one below or above, then you’ll earn a passing chain. Achieve a large chain and you’ll receive a bonus multiplier – the higher the chain, the bigger the bonus. Matching two identical cards or cards of the same colour will also add bonus points to your score.

Throughout the deck there are special cards that trigger random events – both good and bad. These range from scoring a bonus goal, to a loss in score due to a fan invading the pitch, or even a chance for the opposing team to score a goal. There are a few small mini-games as well which usually involve timing a single-click for extra points or goals. These are usually quite throw-away, but again add to the game’s overall personality. 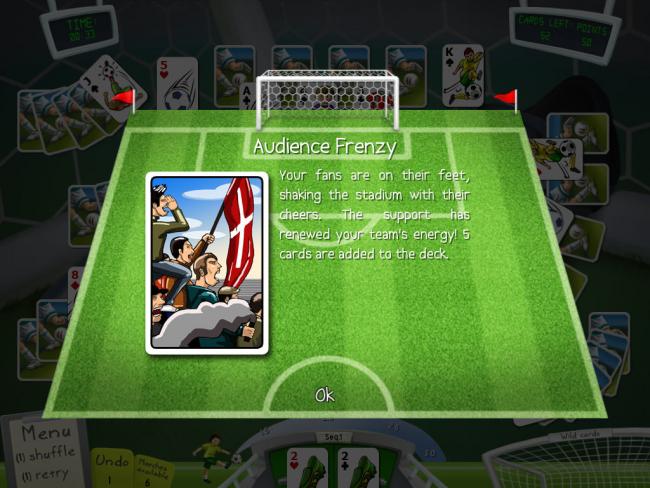 Soccer Cup Solitaire is rather addictive and you’ll most likely be unable to tear yourself away until an entire tournament playthrough is complete. The gameplay is open enough to allow players of all ages to enjoy, too – younger children can simply match pairs without the special rules getting in the way too much, while older players will enjoy the spin all the extra rules put on the game, albeit without finding anything really that challenging.

A small number of issues are present, although these don’t tend to threaten the fun all that much. On a number of levels the cards are spread out all over the screen, and it can be difficult to find pairs. Sometimes cards are even hidden underneath parts of the interface, so widely is the spread. The more compact levels work much more solidly, allowing you to focus on stringing together pair combos, rather than scouring the screen for any pair possible. 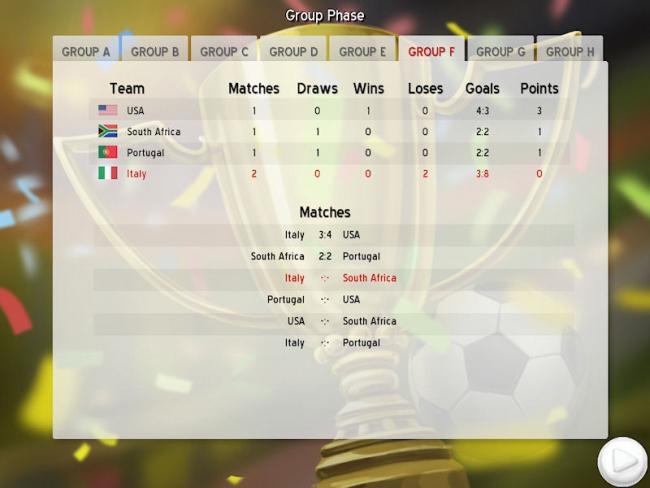 Fortunately there is a counter at the bottom of the screen that lets you know how many pairings are available at any time, which proves to be incredibly useful. The counter does not always work, however, sometimes flickering between 0 and 1. While technical issues are a rare occurrence, they’re definitely present – my game crashed a couple of times during play.

If card games are your forte and you’re keen on football, this may just be a match made in heaven. Soccer Cup Solitaire is addictive fun for both children and adults alike. Make sure to check out the demo featuring one hour of play.