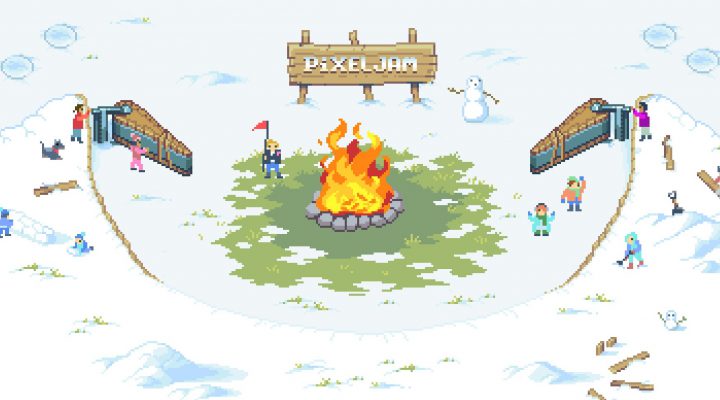 Nudge feature is too easily triggered

Pixeljam, the makers of the platfomer-cum-philosophical-quest Potatoman Seeks the Troof, have released a charming pinball mobile game as laid back as sitting by the fire and watching snow falling quietly on some evergreens. Based on Pixeljam’s computer game that first launched back in 2012, Snowball! is a seasonal pixel art pinball game which takes place on a massive snow-covered mountain, teeming with enthusiastic snow lovers, white-capped trees, and friendly snowmen. Guide your snowball around the board using thematic flippers and bumpers to earn points, gems, and additional balls. Mystery tunnels come up through igloos and magnetic Tesla coils attract floating balls for additional points. The environment is delightful and the vibe is relaxing and casual.

Responsiveness is probably the most important thing to “get right” when creating a pinball game. Ultimately, no matter how cool the aesthetic is, or how many effects and obstacles you throw in there, if the ball doesn’t move well then the game won’t play well. Snowball! has achieved a highly responsive simulation of a pinball with just the right amounts of speed, friction and bounce to make for satisfying gameplay. 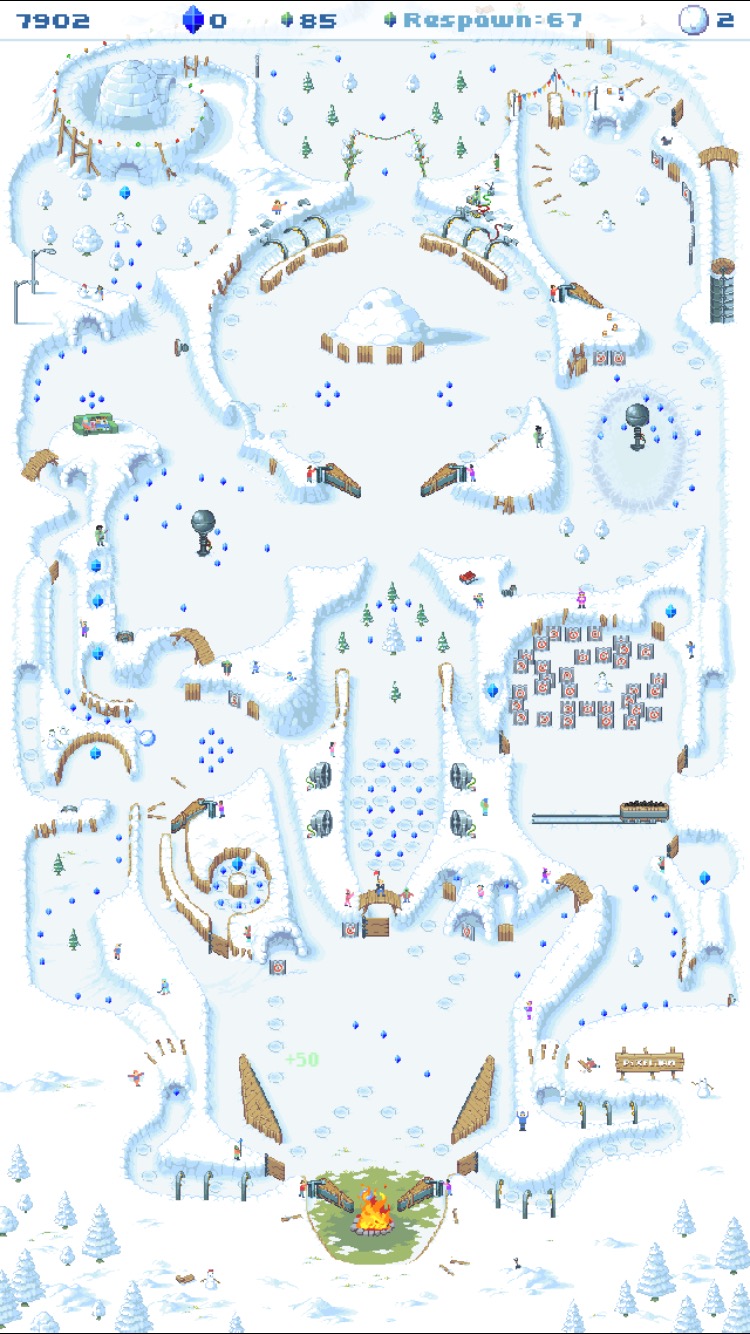 The game is challenging, but with practice and focus it is possible to slowly improve performance and increase your score. Premium game enthusiasts will love that there are no energy systems to fight against or currencies to ration. Pay once and you can enjoy round after round of frozen ball flinging.

Snowball! does what it does well — offer charming pixel art in an easy-to-play, responsive pinball game. However, there are a lot of opportunities for improvements and additions, which I hope to see in future updates. First, I really wanted a high score acknowledgement signaling when I beat my previous high score. I had to rely on my own memory, which faded quickly after multiple rounds. 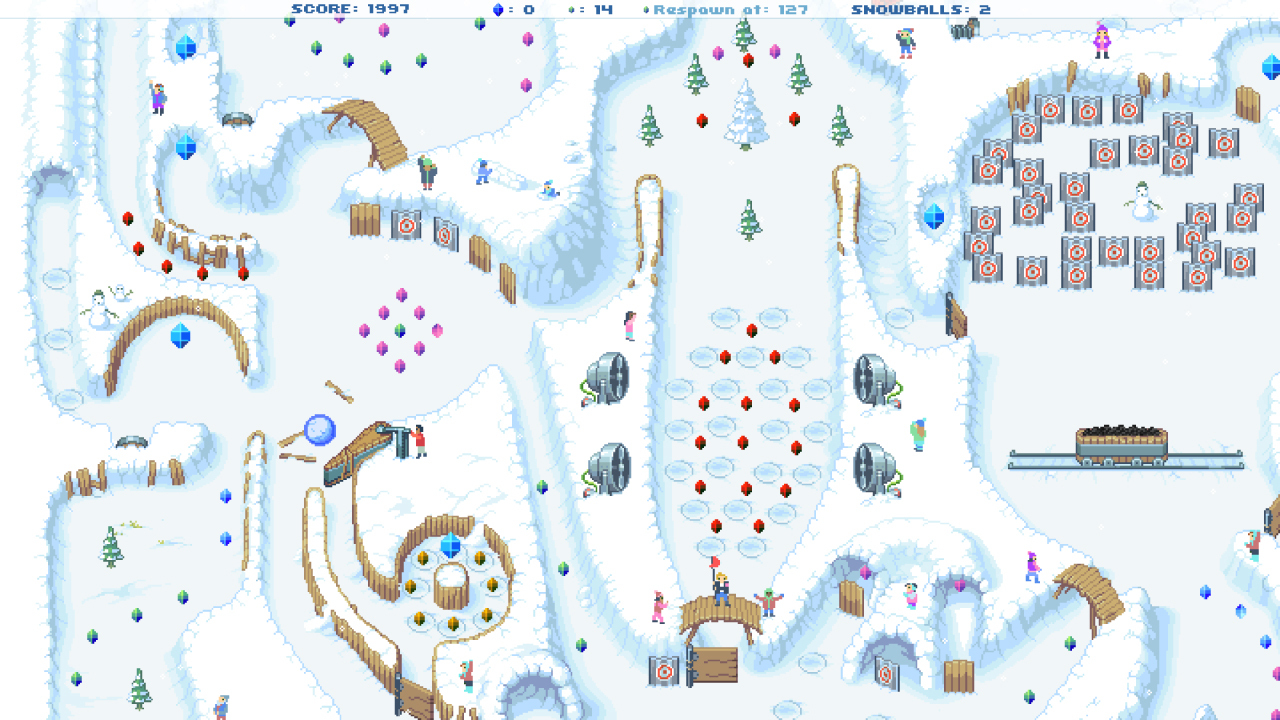 I would love to see some kind of camera control, including a zoom and a pan. I suspect the tiny details offer even more delight when you can see them up close. I could see some environmental effects and got a sense of miniscule character animations like flag waving and snow angel making, but sadly, most were too difficult to see on my phone. Additionally, the camera occasionally swings toward certain balls, causing other balls to fall out of view and eventually out of play.

Snowballs on snowy trails can be very hard to see, especially when they split off into smaller balls and scatter across the screen. I understand that little white ball is the mascot for the game, but it can get frustrating trying to find it quickly when it’s been shot out through a mystery tunnel. Having a highlight option or even the ability to change its color could improve that experience.

Aside from chasing a high score (which would be more motivating with some fanfare), there are milestones to hit such as activating multiball, getting in the igloo, or triggering three castle flags. However, there doesn’t seem to be any bonus for accomplishing these milestones (or if there was, it was lacking announcement) and they simply accrue when you succeed more than once. More goals and clear bonuses for hitting those milestones multiple times would be more motivating. Another possible reward could be to unlock additional environments, which would offer more replay value.

And finally, natural—albeit, enthusiastic—tapping triggers the “nudge” feature which is supposed to help you aim your ball, but docks you 1000 points each time you use it. It feels like some recalibrating is necessary here to not punish passionate button smashers.

Even with its room for improvement, Snowball! is a frosty treat for fans of pinball and pixel art. For those who don’t want to venture out into the cold, Snowball! will evoke the spirit of winter without the seasonal side-effects.