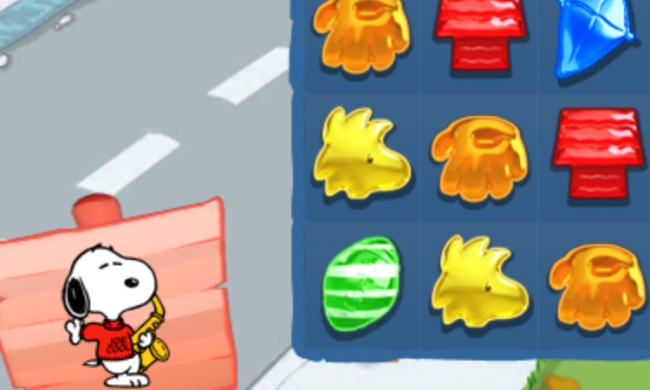 The Peanuts gang has been making people smile for more than sixty years now, and Snoopy, its popular pooch, can seemingly sell anything. That’s what the Schultz estate and developer Beeline Interactive is banking on anyway, having created a match-three game mobile called Snoopy’s Sugar Drop.

The Sugar Drop‘s weakness is its gameplay, which clearly hops on the Candy Crush bandwagon. Its strength, though, is its charming Peanuts-themed aesthetic.

The narrative framework for Snoopy’s Sugar Drop is a hunt for Snoopy’s bow-making sister Belle who has recently gone missing. Players help Snoopy find clues to Belle’s whereabouts by matching three or more cute, Peanuts-themed candies. The candies add some much-needed distinctiveness to the game and are cleverly conceived as baseball mitts, footballs, pianos, doghouses and Woodstock-heads. Beeline further augments the Peanuts motif by creating match blockers shaped like crackers and paw prints.

Aside from the graphics, the game’s other strength is its music. Fans of the Charlie Brown TV specials are sure to enjoy the jazzy, piano-centric musical score and gamers unfamiliar with the animated shows will appreciate the unexpectedness of it.

Like many other match-three games, success generally depends on meeting a certain point objective, collecting a set number of clues, or clearing locked cells. This is done not only by matching three of the same-colored icons, but by matching four or five icons to create powerups.

The powerups here make it plain that Beeline thought long and hard about how to prevent Snoopy’s Sugar Drop from becoming just another Candy Crush clone. Of course, standards powerups are just that—standard. There’s the typical powerups that take out vertical or horizontal rows or cause rectangular explosions. Beyond that are the really fun ones. These enable you to call on Lucy to punch out a single cell or have Snoopy zoom through an entire column with Linus’s stolen blanket. 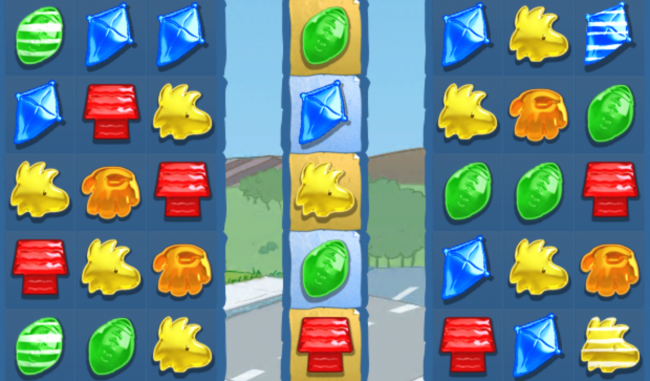 The downside of these is that to have them, you basically have to spend real money. Still, they’re fun to watch.

Snoopy’s Sugar Drop works on the “life” principle as opposed to the energy principle, which is nice since depending on your skill, five lives can last you some time. Once your lives run out, you have to wait a few hours for them to refill or you can buy more.

This is all fairly cut-and-dry as far as match-three social games go, but I have to ding Snoopy’s Sugar Drop for the cost of unlocking more levels. Once Snoopy’s finished investigating a certain area of town (15 levels), you’re unable to move on unless you’re willing to cough up $1.99. A skilled match-three player can breeze through 15 levels and with 90 levels total, the $12 overall price seems a bit steep. Of course you can avoid paying anything at all if you have three friends willing to send you the clues you need to unlock the next sections. Unfortunately, that’s not a viable approach for many of us.

Snoopy’s Sugar Drop is what you’d expect: a professionally-made, but not particularly inventive licensed match-three game. It offers a decent amount of challenge and the graphics and music are charming. In the end though, the gameplay is over-familiar and there’s not much else to recommend it over any other match-three game unless you’re a dedicated Peanuts fan.