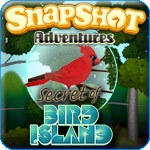 Let me get this out of the way: I consider myself at times a pretty “hard-core” video gamer. I mean, I’m not adverse to hacking and slashing Orcs in fantasy role-playing games, such as World of Warcraft. I can shoot down enemy aliens in Halo 2 and drop nukes on unsuspecting enemies in Supreme Commander. I’m tough, and I’m proud of it. So when my trusty Gamezebo editor asked me to review a “bird watching” game, you can imagine my initial reaction…

OK, so call me what you will, but after playing Snapshot Adventures: Secret of Bird Island, I’m not only sold on the concept, but completely hooked.

At the start of the game you find out your grandfather — a famous bird photographer and naturalist who went missing six months ago — left you a shoebox with your name on it. Inside you find a map of the U.S., his beloved camera and a half-empty field journal that alludes to a mystery (and uses your real name in the cryptic passage, since you typed it in when you started playing!). And so you decide to visit his old friends and colleagues, beginning in Pennsylvania, to find clues leading to his disappearance as well as learn the craft of nature photography in the process.

In fact, you’re asked to snap photos of birds for magazine covers and your field journal, and receive advice along the way. For example, you’ll get more points for your photos if they’re close-up, unobstructed and centered shots, and if the bird is orientated well, such as looking at the camera or caught in the act of singing, eating, flying or preening.

Game-play works as follows. After you get your mission, such as take five photos of a Blue Jay in-flight or three photos with quality of at least 3 stars, you’re presented with a landscape such as a forest, parks or shoreline (while you’re on a moving boat). You can move the mouse side-to-side to see even more of the environment. Your mouse cursor is now a magnifier, so as you move it around to see subjects to photograph, you will see a larger view of the bird when your mouse is placed over top of it. Take the photo by pressing the left-mouse button. If you’ve earned the zoom lens you can use your mouse’s middle-scroll wheel to zoom in closer; other tools you can unlock for completing missions include an infrared scope, bird seed (to get them to eat), bird identifier (which tells you what kind of bird it is), a “Flight Stimulator” plane (to make birds fly), camera auto-winder, and more.

Bonus points are awarded at the end of the level for finding other species (such as a Baltimore Oriole or red-winged blackbird) within a predetermined amount of time (and only if you have film left).

Developed in collaboration with experts at Cornell University, this game features authentic-looking birds and animations, and realistic birdsongs. You can unlock additional birdsongs as a reward for taking good photos.

The big payoff is seeing your photos at the end of each level. You must choose between two side-by-side photos and once you do, the points are revealed for both so it’s almost like a mini-game to choose the best one (and see if the game agrees!). You can see your best work as a cover of a magazine and in your field journal (which you can view at any time from the main menu) or with the click of a mouse you can email a photo to a friend right from within the game.

As you travel throughout the U.S. to photograph new birds, you will receive clues and other information that will eventually unravel this grand mystery.

A wonderful addition to Snapshot Adventures: Secret of Bird Island is an unlockable Bird Creator mode. With this clever in-game tool, you can create any bird you like. You begin with a basic shape — such as an owl, gull, loon or hummingbird – then begin to tweak the wingspan, body size, beak length, eye style, field marks and color, and so on. Then you can name your bird (mine was called the Toronto Tailfeather), add other info if you like, and then upload to the Net for other gamers to download and photograph. I also downloaded close to 200 other custom-made birds to photograph in various locations.

As fun and unique this game is, there are a few faults. For one, it’s far too easy to unlock the Bird Creator mode, which only took about 30 minutes or so. It would be a better dangling carrot if it took longer to achieve this bonus. Secondly, the feedback doesn’t always match your performance; in one instance, a magazine editor told me “An excellent collection of new photographs!” yet I failed the mission and had to start it over again.

Even with these minor shortcomings, Snapshot Adventures: Secret of Bird Island may be the most refreshingly fun casual game of 2007. Seriously, yes, a bird photography game. But before you turn your beak up in disbelief, download this iWin game and give it a spin.