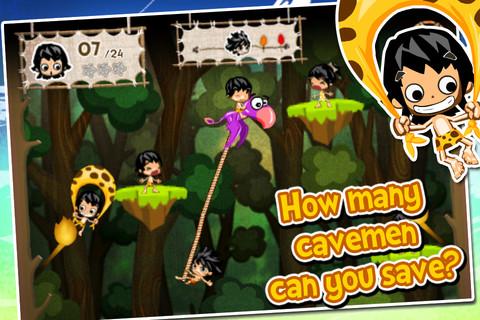 Have you ever played through a game, and as the minutes crawl by, think to yourself: “Is this it?” Perhaps you’ve just got a Strokes song playing through your head, but more than likely, you’re playing a game like Snap Escape. The game relies on one simple idea and never adds anything new, ending up as a game that you’ll soon forget after you realize how shallow it is.

The game is set up in three levels filled with seven stages a piece. The object of the game is to save little cavepeople by swinging side-to-side on a rope tied to a flying dinosaur. You are ranked by how many cavemen you saved in a level, using the tried and true three star ranking system seen in nearly every mobile game of this type.

As you swing from side-to-side using the iPhone’s accelerometer, you hit the cavepeople into the air who parachute down. All you have to do is touch their parachute or body and you’ve saved them. Along the way you’ll be introduced to new “enemy” dinosaur types that seemingly are supposed to cause you trouble, but I never actually noticed them changing the gameplay all that much outside of the T-Rex eating parachuting cavepeople from time to time. The game also has a couple of power-ups: one that has the parachuting victims suck into you for a short period of time, another that slows time, and then one that gives invincibility to the cavepeople from the would-be attackers.

These power-ups and enemy types are introduced every few levels, but again, they did not change the core challenge of the game, which is wrestling with some bizarre, awkward, occasionally mind-melting controls. Swinging from side-to-side is one thing, but once the parachute people are in the air, you can also tap on their parachutes to keep them from falling off screen. Attempting to tap the screen while continuing to twist and turn the device is akin to rubbing your tummy and patting your head. It’s not easy to focus on doing each of them at the same time. For laughs and giggles, throw in that the detection on tapping the parachutes is suspect at best, and you’ve got a recipe for disaster.

This isn’t to say that Snap Escape is a hard game—at least depending on what your goals are. Because you can’t die and you only need one star to move on, this is a game that can be easily breezed through in less than an hour. Getting three stars on all the levels will be a challenge, because you have to save everyone on the level. On the later stages on all of the campaigns, you’ll reach 33 that you have to save to reach three stars. I’d rather not drive myself crazy fighting the controls for some extra stars, please and thank you. 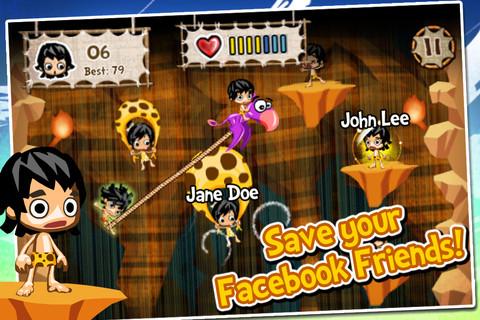 The developer Gambit Game Labs has plans to expand the game through at least seven more levels. There are also four stages in the game’s survival mode, which simply has you playing the game until you fail to save four cavepeople. Like the core game, there is simply nothing compelling about it. There is Facebook integration and leaderboard support if you happen to want to display your swinging skills to compete with friends.

Snap Escape‘s problem is that it relies too heavily on a pretty bad idea. The game is competent and the price is absolutely right for this type of game (read: free), but the controls are shoddy, the introductions of power-ups and enemy types do nothing for the game, and simply adding a bunch more cavepeople to save as you progress through the game doesn’t add variety—it adds tedium upon tedium. Take my advice—just stay away.