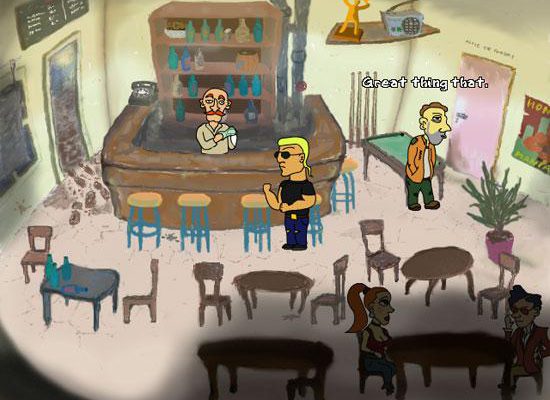 Snakes of Avalon is weird. Like, really weird. So weird that by the end of the game there’s a good chance you won’t even know what happened. Or if it happened at all. Maybe it was just some sort of alcohol fueled delusion, who knows. But this weirdness is also makes Snakes of Avalon intriguing, which is a good thing since it’s otherwise just a pretty straightforward point and click adventure.

Jack looks like a hobo. He drinks too much. He’s a joke to everyone, even to the bartender at Avalon, his watering hole of choice. And he’s also the star of Snakes of Avalon. After hearing some strange voices Jack stumbles upon a murder plot. A woman and her lover are planning to kill her husband. But Jack won’t stand for that. So, along with the help of some possibly imaginary friends, he decides to stop them.

Once he embarks on this journey, which never actually takes him out of the bar, Jack descends into a world of madness. There are fish and posters that talk and a skeletal zombie moose. There are time machines and robots and questions of good and evil. Again, it’s really strange. Whether or not it all actually means anything, or even makes sense for that matter, is up for interpretation. But at least Snakes of Avalon feels unique. It may be short, with just four acts, but there really isn’t anything like it. At least in terms of story. 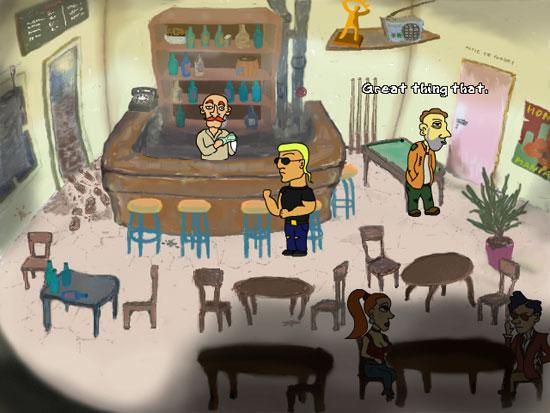 When it comes to gameplay, Snakes of Avalon isn’t quite as original. Instead, it’s a straightforward adventure game. You can click around the environment to make Jack move where you want him, and when you can interact with an object or character your cursor will turn red. You’ll collect items along the way that will be used for solving puzzles. The answers to these puzzles are, as you’d expect, quite strange. But since your inventory is always very small, it’s never difficult to figure out what to do. You simply experiment with what you have on hand and you’ll discover the solution.

In keeping with its bizarre theme, Snakes of Avalon also features a pretty unique art style. Actually, it looks almost like the whole game was created using MS Paint. But that’s not to say the game looks bad. Strangely enough, the simple, almost homely visuals fit the game perfectly, as does the minimalist animation. Sound wise, the game also features some pretty solid voice acting and a great soundtrack, though unfortunately you won’t get to hear near enough of either. The vast majority of the dialog is text only and at random intervals the music will simply stop for no explained reason, making Snakes of Avalon a frequently quiet game.

Most games get a recommendation based on the way they play, but Snakes of Avalon is worth experiencing simply for the world it presents. It’s weird and dark and may just contain a deep, hidden message. Or maybe not. But since it only lasts an hour or two, there’s really no reason not to check the game out and see what, if anything, it’s trying to say.