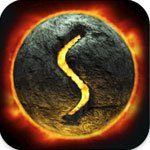 When mobile phones starting gaining popularity about a decade ago, few people thought that their tiny monochrome screens would ever make for a viable gaming platform. Still, they tried. Working within the limited options available to mobile software programmers at the time, Snake was born. It quickly became a fun little diversion that millions played to pass the time. Now, more than 10 years later, Snake has been reborn for the 21st century.

SnakeGalaxy takes the basic concept behind Snake and brings it into a 3D world. Eating food scattered across the gameworld will cause your snake to grow. If your snake meets it’s own tail, the game is over. It’s a concept that even predates Snake itself (does anyone remember the lightcycles in Tron?), but it’s one that holds up to this day.

Where SnakeGalaxy differs from it’s predecessor is in it’s 3D playing field. Rather than being trapped in a small 2D square forced to make right angle turns, SnakeGalaxy takes place on spherical worlds and allows for a far greater choice of direction. The gameplay feels deliberately inspired by Super Mario Galaxy, a title for the Nintendo Wii that took their mascot on an adventure hopping from asteroid to asteroid. Both games are about spherical travel, and both hold the same visual frame of reference for the player.

This time around the snake’s tail isn’t its only means of demise. As the stages progress, you’ll find that certain obstacles litter the playfield that the snake musn’t bump into. Each level has it’s own distinct theme, and everything from the snake to the obstacles will change appearance to reflect that. On one world where the snake is exploring a ball of denim, he becomes a threaded button and the obstacles are the studs on the jeans.

The only real issue with the title is the lack of guidance and level of difficulty. To unlock each stage you’ll need obtain a certain score before dying. Each stage needs a different score, but there’s nothing in the game to tell you what that score is. By the time you’ve reached the third world, you’ll likely find yourself wondering if you’ll ever unlock the fourth.

Controls for the game are fairly simple and make good use of the touch screen. Touching the direction you want the snake to go will get him to make a quick turn and head in the direction you’ve intended. The snake can travel anywhere on the sphere, wrapping itself around and around as it sees fit. It makes for a neat twist on a game we’ve all grown to love, but it would have been nice to see some additional gameplay elements in there like objects that the snake could wrap around to create intricate paths, or elevated platforms for the snake to cross its own body safely.

While it’s an interesting update on an old formula, and it does what it’s attempting fairly well, it would have been nice to see more from a modern update to Snake. You’re certainly getting your money’s worth at the 99 cent price tag, but I would have been happy to spend more had the title been fleshed out properly. If you’re looking for a new twist on an old game, you’ll find more than enough to love in SnakeGalaxy. But as a true successor to the Snake name? There’s just not enough new to call SnakeGalaxy heir to the throne.