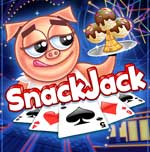 Snackjack is a fun twist on the Turbo21 card game.

It doesn’t take much time playing Snackjack before you realize that if you’re going to have any success at the game at all then you’re going to have to start doing some math in your head… quickly. Wait! Come back! It’s not that bad! Actually, once you get into the groove it’s a lot of fun, I promise!

In Snackjack you’ll be playing four hands of blackjack at once as fast as possible trying to win food for your pigs at a local fair (yeah, it’s a bit of a logic jump). You’ll have four hands in front of you and 70 seconds on the clock, and the dealer will keep dealing one card and then you decide what hand you want to apply it to. If the hand ever adds up to more than 21 then the cards in that hand are score, cleared, and the space is empty to start over. Busting just makes the cards go way with no prize.

Every time you score a 21 the cards are cleared and you get a snack for your pig. You can also score snacks by having 5 cards in a hand and still be under 21, or by making straights. When the round is over you get one more chance at snacks when your hands as they stand play against the dealers two cards and for everyone of yours higher you snag another snack. If you get enough snacks in the time limit then you move onto the next round.

Each round is a different food vendor at this fair, serving up everyone from hotdogs to sushi rolls. The snacks and look of the vendor will change but the turbo-ized blackjack gameplay stays the same. The job is to keep winning snacks and feeding them to your pig. Make it through enough rounds and you’re pig will retire to your farm, and retiring pigs to your farm will eventually make it grow giving you the chance to build new buildings and making other additions.

The most important strategy tip I could offer up is that to remember than any snacks over the required number for every round are not fed to the pig but put into a big sack. Those extras are applied to the next rounds requirement, so if you carry over 4 and the next round needs you to get 14 then you really only need 10. It’s key in the early rounds to stack up some extras to help you out when the rounds get harder.

Once I was into it I realized the best strategy was to try to get as many hands to 11 as possible, then just clear them off with a 10 card. Before long it felt like second nature to put 9’s and 2’s together and 7’s and 4’s and the numbers that were going to fit well together were like second nature. That’s when I really started tearing my way through this fair.

After doing some research it looks like Snackjack is a sort of re-theme of the popular game Turbo21. Full disclose though, I had never heard nor played Turbo21 before, so to me this was a totally new experience. I can’t really speak to how similar it is to the original, but it really does look like the same exact game with a different coat of paint, so if you have Turbo21 just know you might not get much new for your dollar.

To be honest what I was most impressed with regarding SnackJack was how much I liked it and how much it noodled that part of my brain that demands “just more game.” The faster you work the more points you earn, so it’s really the opposite of “casual” in that respect, even though the simple rules do kind of put it in that category. I had a blast, and will keep at it to earn my pigs that blue ribbon!