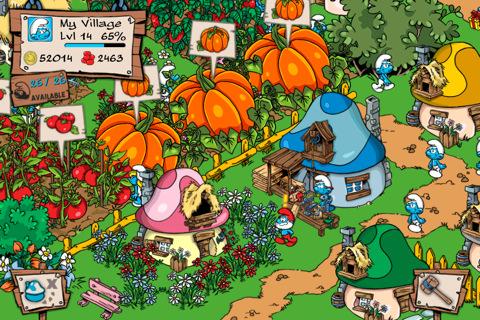 Smurfs’ Village is a smurfing new smurf that smurfs back childhood smurfs for many smurfs, young or smurf. Didn’t catch that? Then you haven’t been playing enough Smurfs’ Village.

Properly translated, Smurfs’ Village is a challenging new social game that brings back childhood memories for many folks, young or old. With the new movie coming out next summer, The Smurfs have started coming back into popular culture consciousness for the first time in years. The little blue cuties are back in a fabulous – one might even say Smurftastic – social game for your iPhone.

Gargamel, the evil old man bent on capturing every last Smurf, has finally found the location of the Smurf Village. The Smurfs are scattered throughout the forest, and it’s up to you to help Papa Smurf build a new village so the Smurfs can thrive once again.

While a lot of the game is made up of the trappings of social games (timed events, harvesting and collecting, purchasing items to speed things up, etc.), what sets Smurfs’ Village apart is how well it uses the Smurf license to its advantage. For example, Jokey Smurf – master of mischief, carrying exploding presents for all – will give you one item per day. It might be useful, or it might be just a gag; Timber Smurf can chop wood to be converted to gold in order to build more houses for more Smurfs to live in.

Other smurfs bring with them minigames that help you level up your village faster. The first game you’ll play is Papa Smurf’s potion mixing game. In it, you’ll shake your iPhone until the color of the potion is just right, but not shaken too much. Harder difficulties have you maintain the color by carefully continuing to shake. Another fun one is Greedy Smurf, the baker, who has four ovens to watch and make sure his pastries don’t burn.

Smurfs’ Village also has a good amount of depth to it. There are a lot of crops to grow, missions to complete and things to build and upgrade. These missions, too, never feel contrived or forced. For instance, you can opt to send a Smurf out to keep watch for Gargamel. The plus side is, after a time, you’ll have more XP and gold. The downside is you’ll have one less Smurf to tend gardens or build structures. It’s a fun trade off. 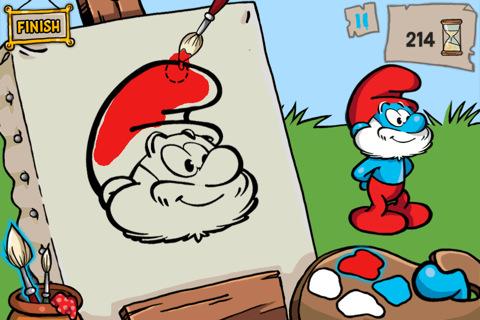 You can even let your friends in on the Smurfing action. Thanks to Facebook integration, any friend of yours who links their Facebook account to Smurfs’ Village will appear on a map. Each day, you can visit a friend, giving and receiving free gifts. Don’t feel like publicizing your love for all things Smurfy? You don’t have to; Smurfs’ Village allows you to visit a random village anonymously without linking your Facebook account.

All of this is wrapped up in a beautiful, fun cartoony package. The Smurfs look just like you remember them: bright and blue. The design is exactly like the show, replete with mushroom houses, gardens and streams. All of the menus and icons are clear and easy to see. The music, though limited, is a very high quality soundtrack. The ambient forest sounds while you’re working are very nice as well.

In fact, the only real problem with Smurfs’ Village is some possible performance issues. The game slowed the iPhone (a 3GS, so take that as you will) to a crawl – across the board. Other apps (including Mail, Safari and iPod) crashed or slowed while Smurfs’ Village was running in the background. It took a full restart before things ran properly. Again, this may be isolated, but it is worth noting.

Given that Smurfs’ Village is a free download, it’s a no-brainer proposition. The Smurfs haven’t lost their charm, and it’s powering a great game underneath its Smurfy exterior. So don’t smurf any longer, and go smurf Smurfs’ Village. See? You do understand smurf after all!