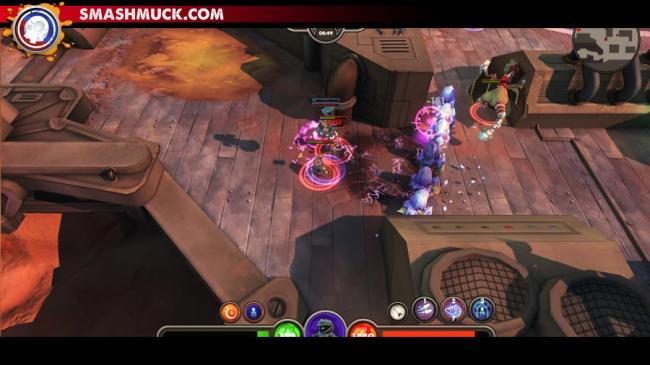 Your second trip to Planet Muck will be a pleasant one.

The word “SmashMuck” sounds like it might apply to some kind of full contact poker game, but it’s actually of more interest to MOBA fans. That’s because Kiz Studios has rolled out SmashMuck Champions, a free-to-play PC game available through Kongregate that is set on Planet Muck just like Critter Escape. That’s by the second star to the right. No, wait, that’s something else.

Like any MOBA worth its salt, the focus of SmashMuck Champions is on competitive contests between teams of players – mostly five-on-five (5v5), although there are three-on-three (3v3) battles as well. But since you have to walk before you can run in this part of Planet Muck, the game offers a tutorial with Coach Stache plus a variety of practice modes to get you acquainted with the gameplay.

A word of caution: Though it’s possible to play with a keyboard and touchpad, playing well requires a mouse. That’s because you move your Champion with the letter keys but target enemies with the mouse and execute basic attacks with a left-click. Each Champion also has three special abilities, which could be attacks, buffs or debuffs. Those can be selected with the number keys or the scroll wheel, and they’re activated with a right-click.

The starting selection of 21 Champions is pretty impressive for a MOBA that is just starting out. Kiz is going the rotation route, meaning that a certain number of Champions will be playable for everyone, with the selection changing on a regular basis. Specific Champions can be unlocked for permanent use by spending either Clobbercoins, which you can earn in battle, or using Kongregate’s Kreds to acquire SmashBucks. In any case, you’ll always have access to at least a couple of offensive, defensive and support Champions at all times.

SmashMuck Champions supports league and tournament play (plus tools to form clans, which are called Alliances here), but at least in its infancy, you’ll mostly be joining the queue that puts you into the next available game or selecting a wait list for a specific game type. Siege is the mode that is most stereotypical of the MOBA genre, with Champions and NPC troops fighting to destroy the other side’s garrison and turrets. Another familiar mode is Conquest, where the object is to take over five Control Points and hold them for as long as possible.

Plunderball is played 3v3, akin to capture the flag as you and your teammates try to transport a ball from the other team’s base to your own. The catch is that your team can’t score if your ball is in the possession of the other team, leading to some wild reversals of fortune. The most original mode is probably Destroyer, where both sides have giant robots that can be leveled up by gathering crystals on the battlefield. Depending on the situation, you may be attacking the opposing Champions, trying to stop their robot, or going after the crystals. In every mode, games go by quickly, usually wrapping up in 15 minutes or less. 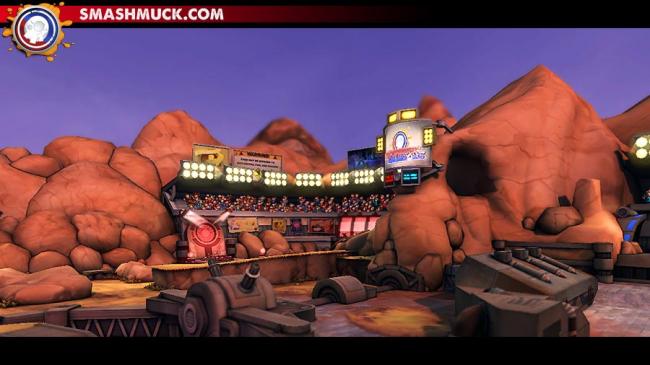 The cartoony graphical style of Planet Muck might make you think that this is a game for the younger crowd, but there are already some players with serious skill. Victory in any mode requires some idea of what you’re doing, a good mix of Champions, and teamwork. In-game chat can help with the last of those, and there are hotkeys to shout some common phrases in a hurry. The victors get more of the spoils, which include experience points and Clobbercoins. The game also assigns you a rating in each game mode and tracks numerous stats. Here’s one free tip: You can fall to your death on some of the maps, including in some places the map design doesn’t make it obvious.

Between battles, you have a variety of ways to improve your Champions. The shop sells new weapons and items called workouts that boost secondary stats. Many of these goodies require you to reach a certain level before they can be equipped, so the more you play, the more powerful you’ll become. People who spend a lot of money on the game can get the best stuff, but they’ll still have to play often to actually be able to use it, which is as it should be. The client sometimes hangs up without crediting you for the match you just played, though simply exiting the game and hopping back in solves that problem.

Kiz Studios seems to have taken good notes on what has worked for previous MOBA games, and the developers are keeping the lines of communication open during the open beta process. That provides some confidence that the issues that players have raised so far, most of which have been about Champion balance, will get ironed out. A MOBA is ultimately only successful if it attracts enough players, and SmashMuck Champions appears to have enough substance and style to hook plenty of them.

Into the Dead Review