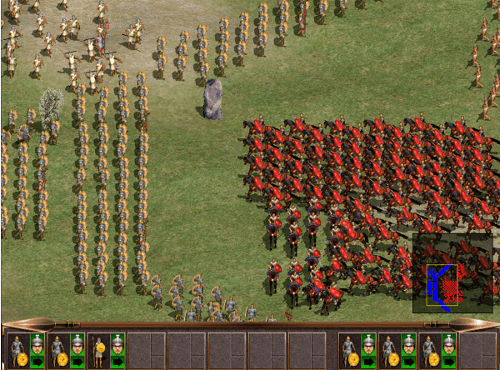 Games like Legion are legion, but not on the iPad.

I live in a city with some of the most complete Roman ruins outside Italy. People come from all around the world to see them, and inconsiderately get in my way when I’m shopping or trying to get to work. The fascination with ancient Rome remains undimmed, and manifests itself in many peculiar ways, not least with games such as Legion.

The game presents you with a variety of historical scenarios to pick, such as the conquest of Britain, or the unification of Italy. Then it’s straight down to civ-lite mode. Capture cities, build farms, mines and mills to produce food, metal and wood. Spend them on other upgrades, including many that allow you to produce a variety of military units. Recruit them, capture more cities, and continue the cycle until you own 40% of the map and win.

Organising your forces and marching them across the map is one of the most interesting parts of the game. Newly-conquered territories need protecting, but troops on campaign are an enormous drain on your resources, meaning it’s costly to bring up reserves from other cities safely behind the line. But the AI is pretty good at exploiting weakly-defended cities, so keeping everything protected becomes an engaging challenge.

For a game that has such a strong focus on military conquest, it is unfortunate that actual combat is the weakest part of the game. There’s a wide range of different soldiers, but the only meaningful way they seem to differ is whether they have missile capability or not. When armies battle, you can deploy them to your liking, give them a formation and a limited range of orders about when they advance across the field. Then you press the “OK” button and watch them set about the foe.

This is supposed to be a realistic simulation of the fact that ancient commanders had trouble changing or re-issuing orders once a battle began. That may be so. In game terms it’s simply baffling and rather boring. Troops don’t seem to have particularly good AI and bumble about in vaguely the right direction. But there’s no great sense that your setup decisions have any meaningful impact on the outcome, and getting there is simply not very interesting to watch.

Outside of fighting, you must also take on the task of balancing your Empire’s books. It’s harder than it first appears. Ideally you’ll want to be producing resources in your rear cities, and troops in your front line. But building all the upgrades to produce top-quality soldiers is expensive and time-consuming so in practice you rarely manage to get the balance right.

Instead, important things will end up distributed all over your growing empire, and the varying maintenance costs of your troops and buildings end up meaning that your requirements for each resource can change rapidly. There are four turns in a year, but only get to build in one of them, spring, so bad planning will leave you short of something and four turns to wait before you can complete a new supply source.

There’s also a bare-bones diplomatic system, although its so stripped down that calling it diplomacy is a bit of a stretch. Essentially it allows you to declare war on your enemies, or ask for peace, with sweeteners added in the form of resource gifts. Of course, often a foe doing badly against you in a campaign will ask the same of you, in which case you can send them back for more tribute. Nothing fancy, but it does at least give you an alternative route to closing one front before you open another, and another way to get extra resources. 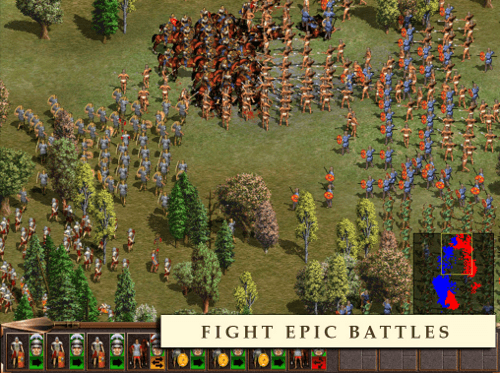 None of the strategy needed to play the game successfully is particularly deep, but it’s pitched at a good level for the sort of relatively casual play that suits the mobile platform well. You can put it down, forget about it for a while, and pick up the threads of the situation without much difficulty when you come back to it. It’s not a particularly complex game either, although it’s too fiddly to learn without recourse to the manual, so the lack of an interactive tutorial hurts.

Legion is a PC port. Games of this sort are ten-a-penny on that platform. Indeed in some respects this title has uncomfortable parallels with twenty-year old classic Civilization, in the sense that some elements of it are positively antediluvian in video gaming terms. But much in the same way as the lightweight strategy suits the platform, there just aren’t all that many engaging civ-lite games on mobile devices, making Legion strangely appealing in spite of its faults. It’s very much a game on the right platform at a lucky moment.