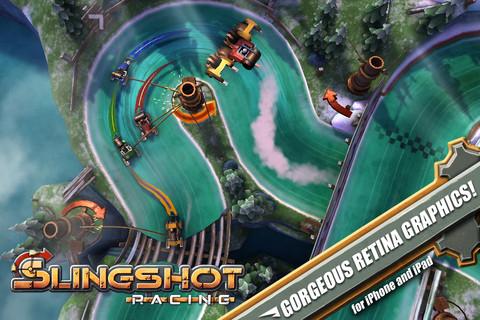 While I certainly don’t encourage you to actually gamble, there’s one mobile games company that’s quickly becoming one I’d be willing to bet on: Crecent Moon Games. From Paper Monsters to Deadlock: Online, they’ve produced some really great stuff. I’m happy to say that this time, working hand-in-hand with Frontier Developments on Slingshot Racing, their record will stay on track.

Slingshot Racing is nothing like your traditional racer. There’s no gas pedal and no steering wheel. Your entire race is conducted with a single action: tapping the screen. Considering how complex actual racing is, you’d think single-action racing would be terrible. I did too. I was wrong.

Living up to its name, racing is conducted on sleds that propel themselves via slingshot-like grappling hooks. By tapping on the screen, your car will latch on to the nearest rotating station near you (always situated around a turn or bend). By latching on to a tower, your car will turn in an arc based on how close or far you were from the tower nearest to you.

It sounds complicated, but it’s anything but. The name of the game is making sure to hug turns as closely as possible by latching on as quickly as you can. Go too late, and you’ll end up making a terribly slow turn. Go too early and you’ll suck yourself into a wall.

It’s very similar to the age-old gameplay of slot car racing, where your entire race is determined by the timing of a single button. Once you’ve mastered the art of centripetal motion, you’ll be ready to tackle tougher and tougher obstacles.

The game is divided up into over 60 individual missions, each awarding you a score of one to three bolts depending on your performance. Getting more bolts unlocks a new mission pack of four, for a total of sixteen challenging missions. Many will be as simple as completing laps in a time trial or beating three other AI-controlled racers, but there are some interesting modes as well.

The best? A high-stress mode where a giant killer snow plow (“The Chomper”) will occasionally devour the car in last place. In order to escape its menacing jaws, you’ll have to make sure you’re ahead of the pack for a majority of the race. It’s the best kind of stress – the kind where you desperately want to win. 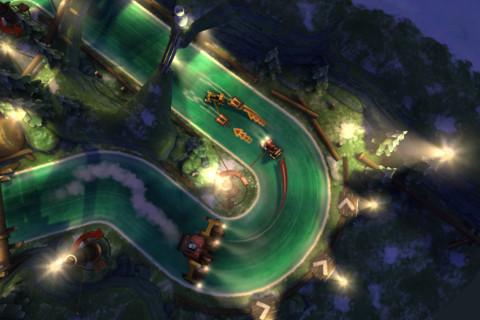 The worst? A mode where you need to collect all of the bolts on a stage to complete it. Most of the “three bolt” awards are only given to you if you can collect every bolt on the field in a single lap. While you can easily settle on one to two bolts and move on to the next mission, completing the stage in a single lap is an exercise in patience.

In addition to reliving my childhood days of slot car racing, it seems Slingshot Racing is intent on reviving another old-school tradition: single-screen multiplayer. If you can cram anywhere from two to four players around a single iPad screen (or an iPhone, but I don’t recommend it) , all of you can play the game as if you had a copy of your own. Each player gets a corner to tap – let the races begin!

Although, while you have to applaud Crescent Moon for a unique way to play with friends, an online mode still would have been nice. Sometimes getting four people in the room at the same time just isn’t a feasible way to play with multiple people at the same time. This isn’t a huge knock against Slingshot Racing though, because it’s a game so good I want it to have more multiplayer options. 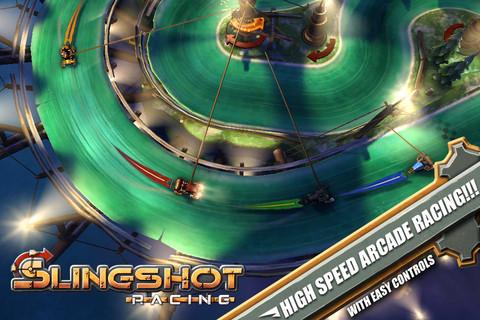 The only thing that Slingshot Racing is missing to push it from “great game” to “all-time best” is … well, I’m not sure. It just feels short one extra part to keep things exciting. A level-up system? Different cars? In-game powerups? The unique gameplay is great, and while I wouldn’t want to mess with the delicate balance of one-touch gameplay at its finest, I just wanted a tiny bit more.