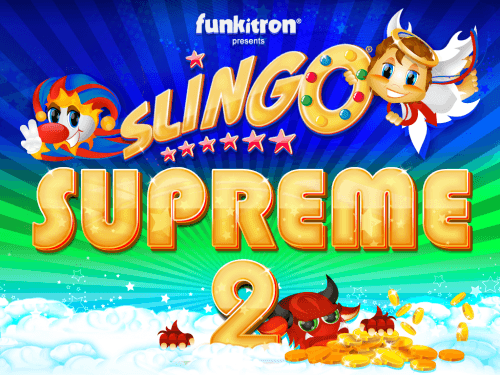 I sling I’ve sling this slung before.

Developer Funkitron has built its name on Slingo and has released a number of successful Slingo titles. Personally, the pure slots-plus-bingo idea never interested me much, but I became a convert once Funkitron began incorporating adventure-style elements into the games. The company’s latest release, Slingo Supreme 2 ignores the adventure aspect, however, and returns to the pure Slingo format, doubling down on the number of powerups and minigames. Sadly, this is one of those times where bigger isn’t necessarily better.

For the uninitiated, Slingo is a blend of slots machine randomness and bingo’s mounting tension. By hitting a Spin button, you hit five reels, and if you’re lucky you match some of the numbers shown to the five-column playing field. When you get five down, across or diagonally, you score a “Slingo”. Since there’s no competitive aspect to the game and there’s no money to be won from it, what keeps things interesting are the minigames introduced in the previous title, Slingo Supreme, and powerups.

Powerups appear randomly when you spin the reels and can be used to help you match more numbers; minigames are triggered whenever a devil character appears on the reels. The main difference between Slingo Supreme and Slingo Supreme 2 is the quantity thereof. Like Mario Party in its latest years though, it just ain’t enough to merit a new game.

Sure, on one hand playing unlocks slots that allow you to equip up to eight powerups at a time, making the game much more dynamic. This go-round, you can unlock up to a full 32 powerups, including new ones like Bounce Slingos (that bounce off the walls for more points) and Echo Slingos (that replay Slingos from gambling’s past). There are also a host of minigames that let you wager a quarter, half or all of your point total. New ones include Battle Dice, which allows you to roll against the devil for the highest total, and Hi Lo, which has you trying to beat him by drawing a higher card. This incarnation of Supreme retains the idea of a random “Daily Challenge,” which gives you something specific to work for, and finally features a leaderboard of sorts, to compare your top scores with those of other players. 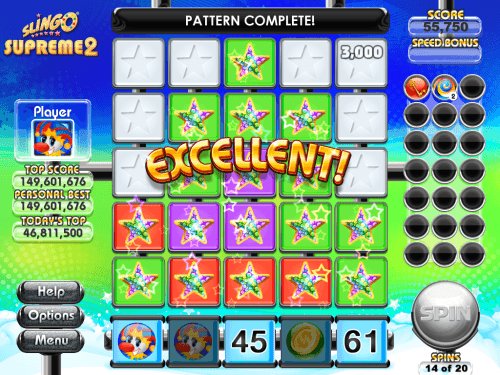 While technically the game offers “more”, it doesn’t feel like enough really to bother with. What’s fun about Slingo is quick satisfaction; slight tension, and then… the board goes nuts, all flashing stars, colored lights and happy “you win” music. Here though, getting to that point takes longer than it should. Unlocking the highest powerups takes many, many games of Slingo.

And despite the whole gambling pitch, the few minigames – far from addictive – quickly become tiresome when played a hundred times. I got to the point where I gritted my teeth every time I heard that devilish “ha ha ha ha,” just trying not to lash out. Worse yet, when I’d finally played enough games to unlock all the powerups, things continued to feel much the same as they had before I’d unlocked them, no matter which blend I employed.

With the gameplay so little changed, Funkitron could at least have mixed up the look of the game to keep things fresh. They’re hideous. Slingo enthusiasts will probably pummel me for saying it, but have you seen slot machines these days? They look fantastic, like Cinderella on her way to the ball. But with more moving parts. Meanwhile, Slingo still looks like the ugly stepsister. It’s harsh, but someone has to say it. And besides, you can’t tell me you honestly like that creepy little Slingo clown. 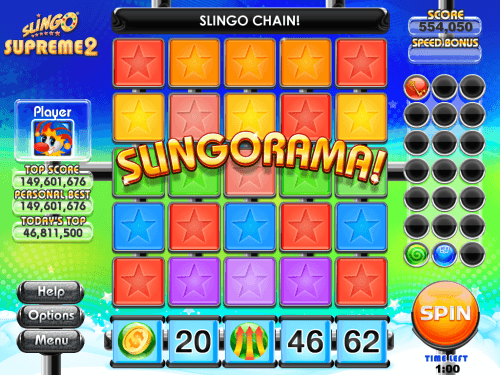 For me, Slingo Supreme 2 hasn’t mixed things up enough to be considered a real sequel and it’s possible Funkitron knows it; hence the $9.99 asking price while Slingo Supreme sits consistently priced at twice that much. While new powerups and minigames provide players with a few new options and give players more control over how they play, ultimately, they don’t change the game enough to justify spending money on it.