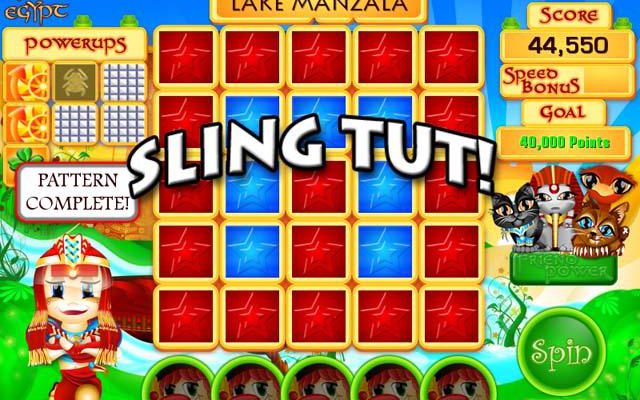 One’s affinity for Slingo — a mash-up of bingo and slots — is likely directly correlated to one’s enjoyment of games of chance. While most titles in this popular franchise incorporate an element of skill, it seems as though winning, losing, and scoring often tend to boil down to random luck. This is certainly true of Funkitron’s latest entry in the series, Slingo Quest Egypt.

After a detour of sorts with last year’s Slingo Mystery, which mixed traditional Slingo puzzles with hidden object and adventure elements, this game gets back to basics and is a true successor to the franchise’s other recent game, Slingo Quest Hawaii. 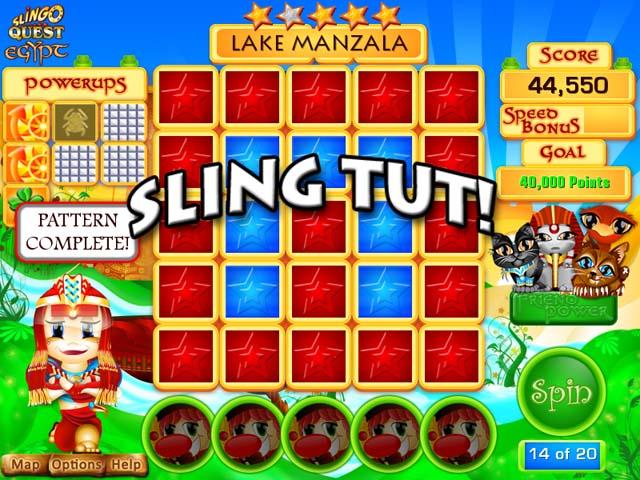 The Egyptian setting proves an appealing one. Players are treated to visually interesting backgrounds in the form of a mirage fortress, a Cairo bazaar, and other locales distinct to the region. We’re also provided a selection of nicely themed objects and characters, such as scarabs, cats, sphinxes, and an ibis. The series’ signature graphics — boldly colored characters and objects that almost look like cardboard cut-out collages — are in full effect; you’ll either love them or find them a bit overpowering. It all leads us toward our objective: Pyramid Slingo; purportedly the most sublime game of bingo-meets-slots this side of the Nile.

If you haven’t played Slingo before, here’s the low-down. There’s a board of numbers in the centre of the screen. Think of it as a bingo card. Beneath the board is a line of circles filled with numbers, one for each column of the grid. This is the slots area. Players can “spin” these circles 20 times in a given game, matching the numbers that come in the circles below with those on the board. The object of the game is generally to clear lines (“slingos”), specific patterns, and, if possible, the whole card.

Straightforward enough, right? As noted earlier, a lot depends on luck. If your numbers just aren’t coming up, there’s not a lot you can do about it. This will frustrate players looking for something a little more stimulating, but it shouldn’t — and clearly hasn’t — proved too frustrating for the mainstream masses who simply want a relaxing digital distraction.

And don’t take the game’s dependence on luck to mean that its only excitement comes from watching numbers spin. As usual, Funkitron mixes things up every few puzzles by adding in plenty of interesting modifiers and objectives. 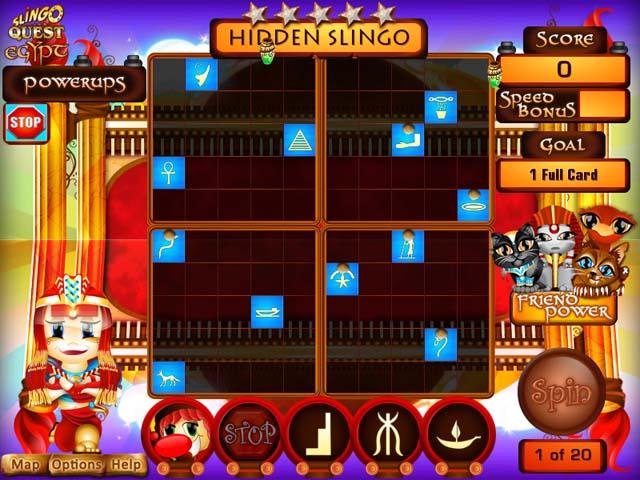 For example, some puzzles swap out numbers for hieroglyphics, which are a lot trickier to match up than simple digits. Others expand the size of the board beyond the typical five-by-five grid, offer more than one board to work on at a time, or pit players against a non-player character in turn-based competitions to achieve the most points.

We’re also provided a broad array of objectives. Each board has one primary game-winning objective, such as scoring a set amount of points or clearing a certain number of slingos, as well as secondary objectives like finding hidden items on the board or accomplishing a task within a set time limit. Look for campaign achievements, too, including earning all of the game’s challenge stars or achieving a record number of career points.

Plus, helpful, game-altering power-ups litter the board. One reshuffles the board when a spin results in no matches, one unlocks secret levels, another offers a free spin near the end of the game, and another renders grid numbers partially invisible to show where other power-ups are hidden. There are many more, and they get stacked on the side of the screen for use in appropriate situations as the game progresses.

There are also several new “friend” helpers, which we slowly earn as the game progresses. We can call on them at any point to do things like show hidden coins and power-ups behind numbers on the grid, get a free spin, or — one of my favourites — unmatch and then rematch a number that had already been taken off the board so that you can recreate some old slingos and get a serious boost in points.

Our constant nemesis throughout the game is the devil. He pops up frequently to test our skills in super quick mini-games in which we can bet points. One requires the player to memorize a group of playing cards then determine whether a fresh card shown was in the group, another has us trying to spot a single difference between a trio of images, and yet another involves trying to stop a spinning coin on the cherub side.

Of course, all of these frills are just that; decorations around a highly successful game of chance that hasn’t really changed much. The important message here is that it’s as much or — depending on your tastes, as little — fun as it’s ever been. Slingo fans can buy with confidence, Slingo decriers can avoid without worry, and newcomers should give the one hour free trial a shot to see if this popular franchise is their cup of tea.