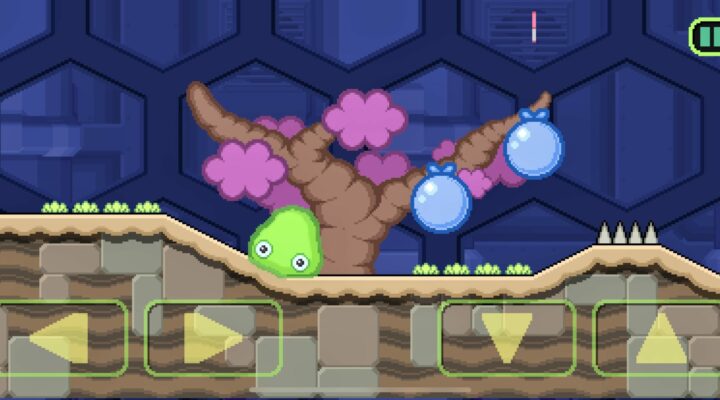 Slime Labs 2 continues the gloopy, squishy physicsy platforming goodness of its predecessor. You’re a slime. You’re in some labs. You need to get out. It’s simple where it needs to be and challenging where it counts. And it’s a decent chunk of fun.

You control your slime with a simple set of buttons. Move left and right, jump and duck. Sometimes you can attack or press switches, and you’ll unlock new skills by absorbing different kinds of slime as you progress through the levels.

There are times when you can turn yourself into a bigger slime, sucking up some goop so you can jump higher. You’ll need to squish down to fit into tubes and avoid obstacles, as well as leaping and hiding and attacking various foes.

After a pretty sedate opening, the game gets challenging pretty fast. Your sliminess is a strength and a weakness, and sometimes you’ll get pulled into moving obstacles and pop. Things do get a little frustrating, and a paucity of checkpoints can make stuff quite grindy.

Getting stuck is never fun, and getting stuck in a position where you need to complete another challenging section just to get back to your prime platforming adversary is even worse. Thankfully it doesn’t happen all that often, but it can be teeth-grindingly annoying when it does.

Slime Labs 2 is a game that’s not about to let you off the hook. If it gets it’s slippery claws into you then you’re likely to see it through to the bitter end. But if the frustration – or the challenge – gets too much, there’s a very good chance you’ll put it down with a swear and a frown.

Hyde and Seek Review – Seek and Ye Shall Find