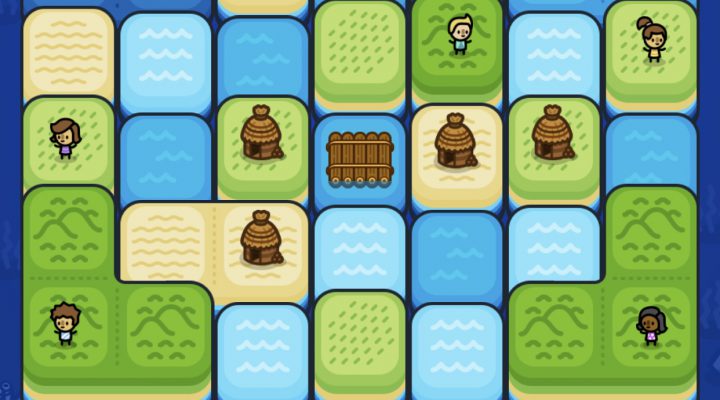 A bright and breezy match-stuff puzzler

Sliding Seas is that rarest of things. It’s a match-stuff puzzler that brings some new ideas to the table, that feels fresh and familiar at the same time. It’s charming, challenging in just the right way, and, if you let it, it’ll probably soak up a good chunk of your free time.

The game sees you sliding tiles around to match them together and rescue survivors stricken in the sea. Connecting tiles changes them – match enough sea and you’ll make land, for example. Chains of matches build shelters, letting you protect the little people from the elements.

Most levels involve saving a certain number of shipwrecked humans. When you’ve done that you’ll take them to your island, where you can build new structures and get quests from VIPs. Other levels see you collecting valuables by breaking floating boxes.

You get power-ups as you play. These can blow up tiles to create spaces, shuffle the tiles into a more favorable combination or suck survivors to the closest land. There are whirlpools, empty spaces and tough blocks that are trying to stop you from reaching your goal as well.

The game looks lovely, although some people might find it a bit difficult telling the difference between some of the tiles – a lot of them are blue. There’s a cheery look to everything, and it’s hard not to get swept up in the waves of charm.

It keeps things fresh as well, throwing in new challenges to make sure you’re not going too used to the matching, and it isn’t afraid to make things a little bit tougher as well. The free to play system isn’t too annoying either, and there are no pay gates.

Sliding Seas is a bright and pretty brilliant puzzler that keeps you on your toes, but in a comfortable and comforting way. If you’re looking for a new, soothing but engaging puzzler, you could do a lot worse than checking this one out.