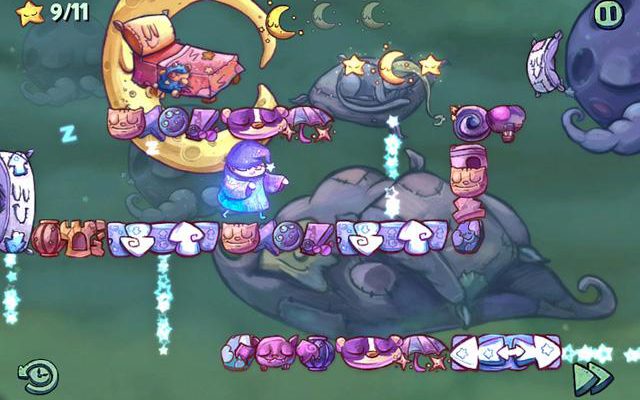 Sleepwalker’s Journey is a dream for puzzle platformer fans

11 Bit Studios is best known for Anomaly: Warzone Earth, an RTS game released on portable platforms as well as PC and consoles. The game focuses on strategic warfare that puts players in the trenches of an all-out alien invasion. To call Sleepwalker’s Journey — a game that drops the battlefield in exchange for a pleasant dream world — a departure is an understatement. Is this game the dream that players hope for, or is it a nightmare despite its pleasing look and feel?

The main character of Sleepwalker’s Journey is, fittingly, Sleepwalker. As one may have surmised, Sleepwalker is on a journey. Clearly the title of this game does not bury the lede. There are many paths to follow to ensure that he arrives safely in bed at the end of the level, but it isn’t done by controlling the character. Sleepwalker is in a constant state of sleep and slowly continues his motion no matter what. To make the trip go smoothly, the player will have to manipulate and shift platforms, pillows, and other movable pieces that help navigate levels. 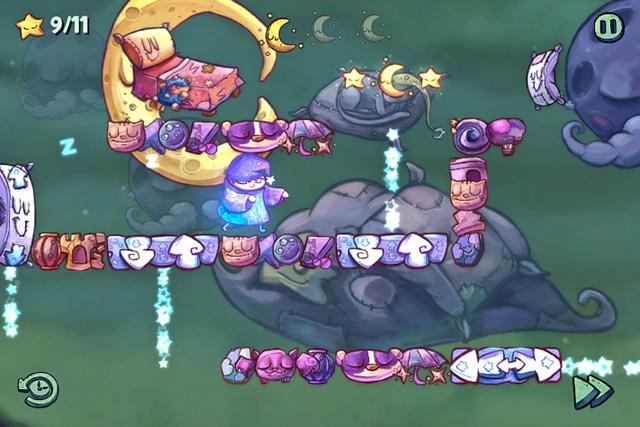 Sleepwalker’s Journey takes place in a variety of dream worlds. Filled with soft colors and pleasant imagery floating in and out of the landscape, it’s a very relaxing environment. The entire experience feels as though it was designed to slowly lull a person into a state that feels as safe and secure as a comfy bed and warm quilt. Of course, that works to the title’s disadvantage if it’s not fun. Optimally, you don’t want a game to put you to sleep.

Luckily, Sleepwalker’s Journey is worth staying awake for. The first levels may make you clamor for a challenge as the game eases you into things at a slow pace, but by the time you’re closing out the first world, that gentle start is nowhere to be seen. You’ll be hectically trying to flip on fans to levitate the Sleepwalker, zip unneeded platforms out of his path, and time cannons–yes, cannons–for the perfect launch in the span of just a few frames. The cannons seem a little out of place compared to the softness of pillows and gentle breeze of fans, but there are cannons, and you’re going to have to use them. Even though the Sleepwalker has a slow and deliberate pace, you’ll start to sweat a little as the difficulty increases. The dreamy environment almost feels like it’s taunting you as you try to maintain the peaceful sleep of the protagonist.

Every level has three goals: finish on time, and collect stars and moons in the process. Completing one, two, or all three objectives will land you with either a bronze, silver, or goal medal, respectively. This in itself is pretty boring, as the goals are always the same. To keep things interesting, there’s a gameplay twist in the form of a rewind button. If you miss a pass that leads to a moon or you accidentally fall off a platform, you can take time back a la Prince of Persia and try again. Using this button rewinds your game, but it doesn’t rewind the game clock. Now you have the choice of collecting all the items and failing to beat the clock, or finishing on time but coming up short in another area. It’s a really cool element that adds an additional choice to manage during a level. It doesn’t totally redeem the repetition of objectives, but it helps. 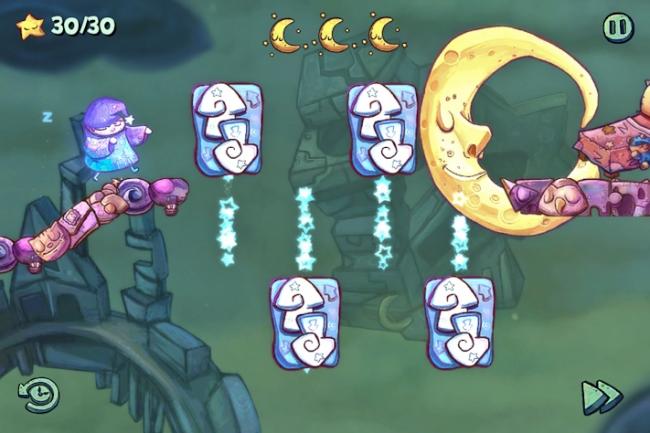 If there’s a disappointment to be found in Sleepwalker’s Journey, it’s that it goes by pretty fast. If you’re not a total perfectionist, you don’t really have reason to play through the levels more than once. And because of the rewind button, there’s no real reason to start from scratch if something goes wrong. That said, every level is worth at least one play-through thanks to some excellent platforming and simple puzzle elements that force the brain to work a few steps ahead. Don’t let the look of this title fool you–it’s quite exciting and requires a sharp mind. Some variety in goals would be nice, but these are more petty wants added on to a really solid experience.

The Lost Chronicles of Zerzura Review