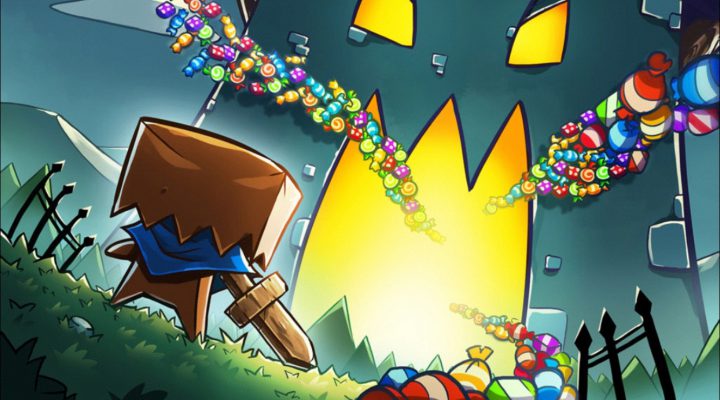 Easy to accidentally stop on top of enemies

Not much in the way of animations

Despite all the critical acclaim and commercial success, I’ve never been a huge fan of path-drawing games. As with pretty much anything there have certainly been exceptions, but it’s never been a particularly exciting thing for me. Though I have to admit, Slashy Hero does a pretty good job of making it more interesting.

Slashy Hero is basically a not-quite-roguelike dungeon crawler where you have to trace a path along the screen in order to attack. Defeated enemies drop candy (because Halloween, I guess) and the occasional piece of equipment, with candy being used back at your base camp to permanently upgrade attack power, speed, or health. Equipment behaves similarly, except it can be swapped out on the fly and will affect the physical look of your character. That, and finding doubles of gear you already have will automatically upgrade it. 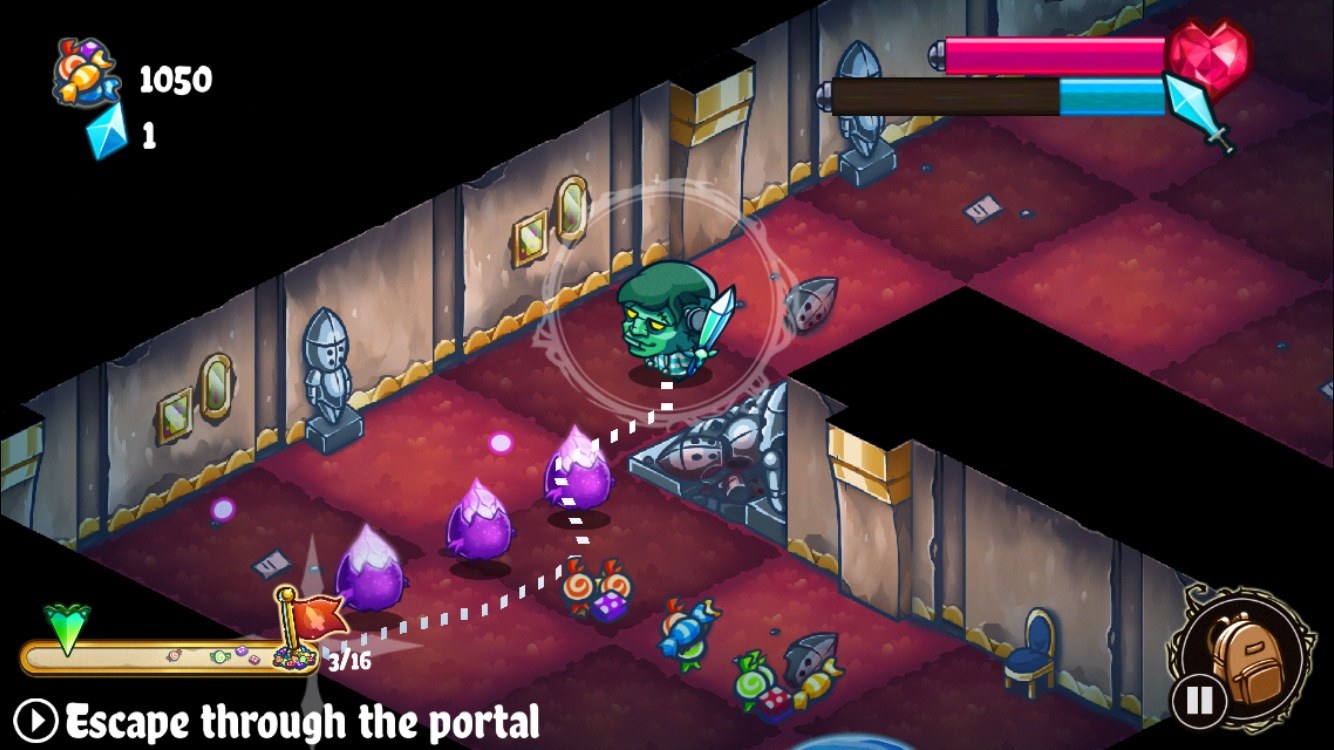 There’s a tiny bit of a story here about an evil house that’s stolen all the candy and the hero setting out to get it all back, but that’s really about all there is to know. It’s a backdrop for lots of loot and candy gathering. Though I do have to say the environments and enemies definitely look the part for the obviously Halloweeny theme. Even the loot is basically Halloween costumes like Frankenstein’s Monster, a teddy bear, ghosts, and so on.

It’s a pity that the animations are so simple, though. The various characters, rooms, and items have a nice look to them but nothing really moves. I mean… it moves — but it’s more like stretching and hovering than actual walking or attacking. Although to be fair the hero at least spins his sword around after an attack. That’s something, right? 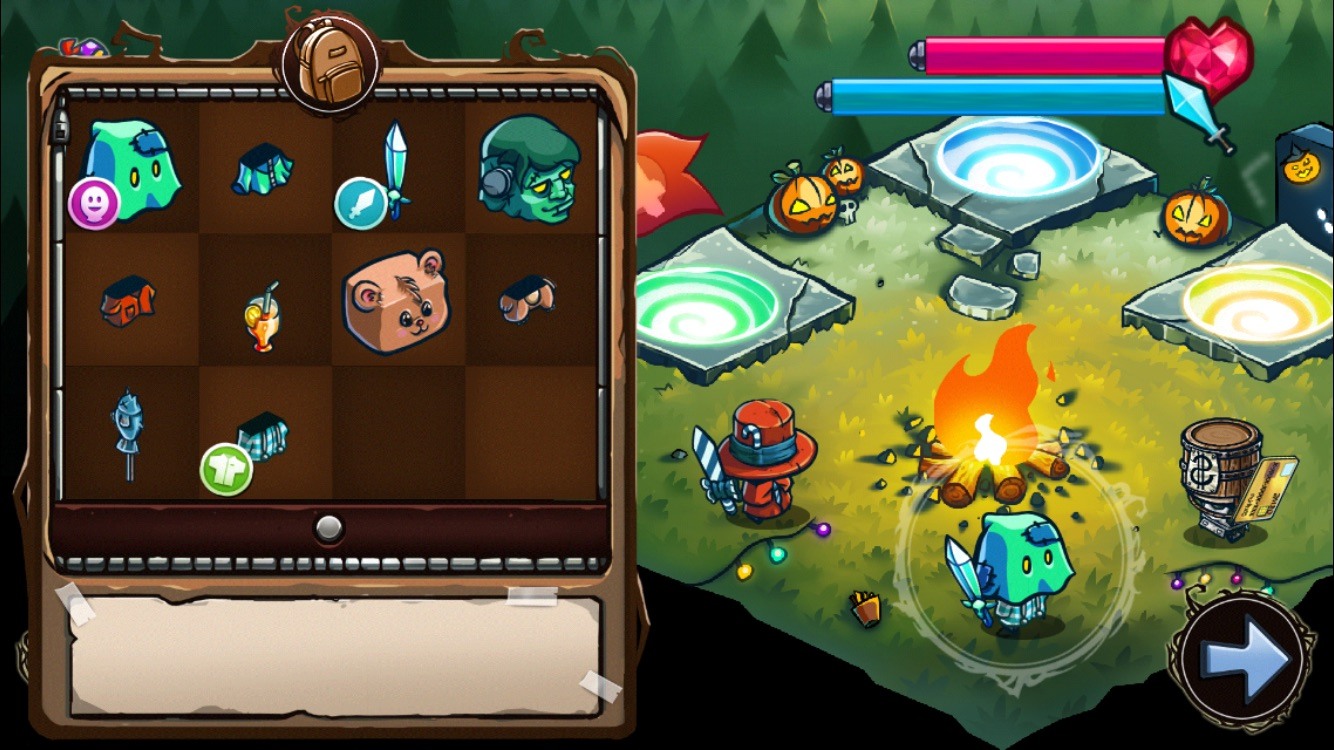 Getting into the rhythm of cutting swaths through hordes of enemies while hoovering up tons of candy can certainly be fun. It takes some getting used to before the whole “tap and drag outside the ring to move, tap and drag from inside the ring to slash” thing starts to feel natural, though. And there are quite a few times where a slash will fail to kill (or even damage) an enemy, resulting in your character taking unavoidable damage. Still it works pretty well. And seeing massive piles of candy getting pulled towards your character is an almost Pavlovian joy.

I only have one major issue with Slashy Hero, and its a strange one. Exit portals have a really annoying habit of popping up in the worst possible spots. Almost without fail one will appear right in front of the hero while I’m in the process of wandering around picking up all the remaining candy. I’ve lost count of how many times I’ve inadvertently exited a room because of this. I wouldn’t call it a game-breaking issue, but it can be super-irritating in a game that encourages searching for secrets and stockpiling resources. 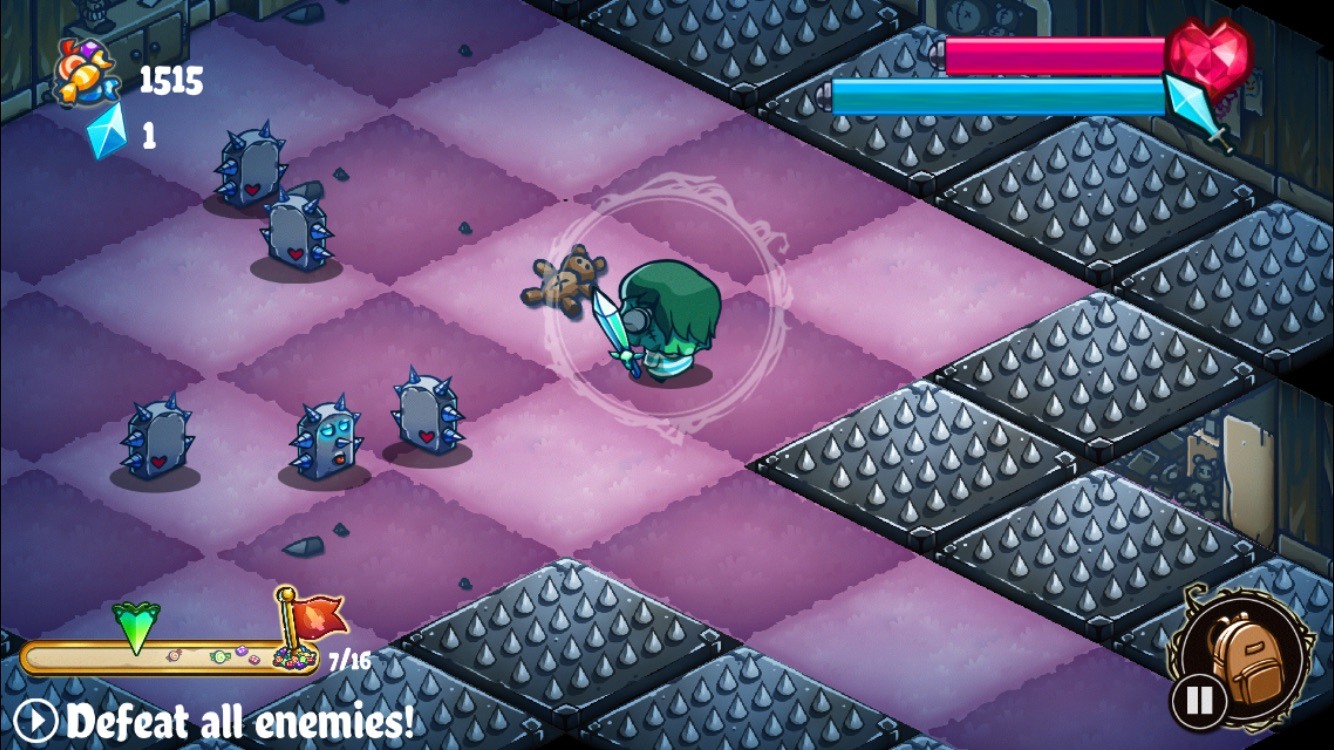 Slashy Hero is fun – it’s just also a little irritating at times. But it does make for a good dungeon-crawling (ish) romp and makes good use of the kind of swiping mechanics you don’t see often outside of games involving air traffic control or harbor management.

Afterpulse Review: One More Round