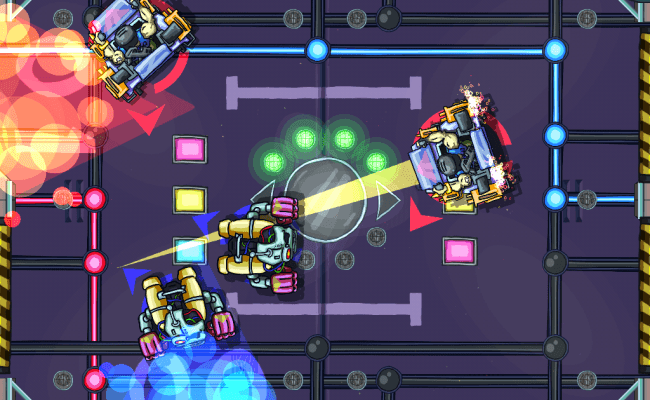 Cheating at Air Hockey has never felt so good.

Am I the only one who gets bored playing Air Hockey after a while? I mean, all you do is hit the puck back and forth across the table and try to score a goal. Where are all the deadly saw blades and environmental hazards to keep you on your toes? That’s why I’m so excited about Slamjet Stadium, the latest release from Alistair Aitcheson that gives us Air Hockey with an attitude.

Slamjet Stadium is essentially an amped-up version of Air Hockey, where the plastic mallets are replaced by ruthless cartoony vehicles. Players can choose from one of six Slamjet teams, including the Space Hogs, the Cortex Crusaders, and the Astro Marines, but there’s no real advantage to choosing one team over another besides the appearance of your players. You can compete in three different Slamjet Stadium tournaments, at the Amateur, Pro, and Ultimate levels, and earn a slew of achievements for things like shutting out your opponent with a “Perfect” win, or scoring two goals in under five seconds. The tournaments are all on the short side, and you can replay any tier if you lose without having to start the whole thing over (even the finals), so the main game can be completed in just under an hour or so. Of course, you’re encouraged to conquer the tournaments with each of the Slamjet teams, which will certainly boost the game’s replay value.

The controls can take a little getting used to at first, as you need to pull and drag each one of your pieces to launch them towards the ball, instead of moving them around with your finger for more precision. This inevitably leads to your pieces flying all over the screen, and accidental points scored on your own goal, which is a new level of frustration all to its own.

The cartoon-style graphics are nice but nothing special, and the menu interfaces are pretty bland and look a bit pixelated when blown up on the iPad’s large screen. There’s also a thin and convoluted storyline that begins to emerge as you complete each tournament, and has to do with evil dinosaurs jumping through time portals or something like that. But what Slamjet Stadium lacks in story and presentation, it more than makes up for in fast and exhilarating gameplay.

Slamjet Stadium takes a sharp (and deadly) turn from more traditional Air Hockey arcade games in the dangerous hazards that pop up during the gameplay. Certain stages feature environmental hazards like whirling saw blades or black holes that make staying alive a bigger concern than trying to score a goal. At any time in a match, you run the risk of having one or both of your players demolished by a hazard, and sit at a huge disadvantage for the next several seconds until they regenerate. There’s also a heated “Last Man Standing” Bonus Round, where the goals are momentarily closed off, and you’ll be forced to dodge a homing saw blade until everyone else on the board has fallen victim to its sharp and gleaming edges. These are decidedly the most fun points to earn in Slamjet Stadium, and they always manage to catch you off guard, changing the flow of the gameplay in one fell swoop. 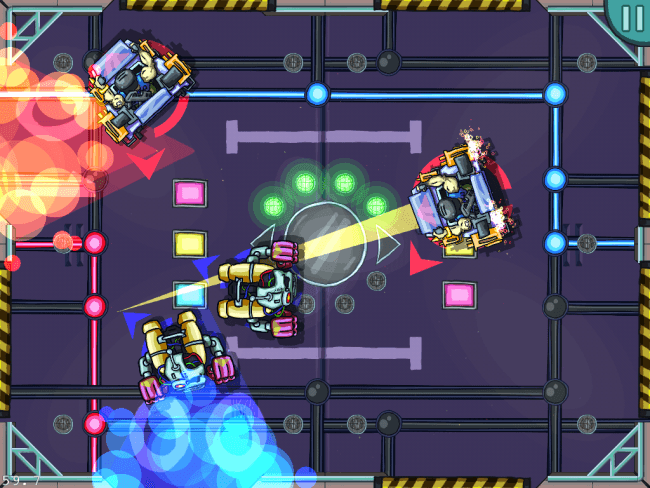 At randomized moments during a match, a button in the center of the playing field will open up and display a power-up that can be activated when pressed, and can either help you or hurt you depending on who gets to it first. These power-ups include blowing devastating wind in either direction; encasing your opponents in immobile blocks of ice; or protecting your goal with explosive land mines. But be careful about when you activate them! Two little arrows underneath the power-up icon will alternate between which side of the playing field the effect is applied to, and I can’t tell you how many times I mistakenly covered my opponent’s goal in fortified landmines, or made a huge gust of wind blow the ball right back into my own goal.

The best part about Slamjet Stadium is the frantic local multiplayer mode, where you can compete with a friend on the same iPad. What this means is that it’s really easy to cheat, and both you and your friend are going to want to cheat too. Seriously, the game itself even gives you tips on how you can cheat and pull one over on your buddies. What’s great about the local multiplayer is that everything on the board is free game: sure you can slam your own players into your opponent, but why not just slingshot your opponent’s piece directly in the path of a saw blade instead? It’s much more effective, don’t you think? You just have to decide if you still want to remain friends with someone before playing this mode, because the “play unfair” mindset can have an immediate toll on any relationship here.

But really, who needs friends when you have Slamjet Stadium? The game is a wonderful take on the Air Hockey concept, with tons of action-packed twists every way you turn, and that frantic addictiveness of a great arcade game. The environmental hazards and power-ups are exciting and unique, and I don’t think I’ll ever look at a regular old game of Air Hockey quite the same again!