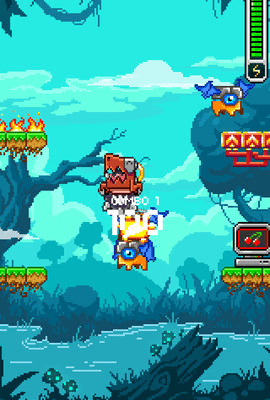 SlamBots scores a slam dunk! By which we mean it’s really good.

Quite honestly, I didn’t “get” SlamBots at first. I booted up the game, bounced around for a while, died rather quickly, and wondered what the heck all of that was about. I tried again, and received essentially the same results. And then again, and again, and perhaps a few more times as well.

And yet, thirty minutes into the game I was completely hooked. While SlamBots may appear rather simplistic in concept, and maybe even light on the content, there’s an underlying depth that slowly but surely pushes its way to the surface: to the point where it’s 2am and you just need to have one more stab at besting your high score, and you realize you’ve been playing for far longer than you could have ever imagined. 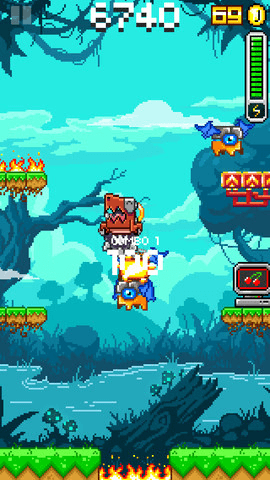 SlamBots is as simple as this: enemies appear on the screen, and you bounce on top of them to kill them. Allow an enemy to hit you from the side or above, or touch one of the many traps that appear periodically in the level, and you’re toast.

As you bounce around the game screen (controlled via tilting your iOS device left and right to move), more and more enemies will pop up, and if you can bounce on their heads one by one without touching the ground, you’ll rack up a score combo and land yourself with a lovely string of numbers. SlamBots is all about climbing the online Game Center leaderboards, so if you’re a competitive sort of person, prepare to feed your addiction.

The movement in SlamBots feels wonderful. As you bounce up high and then swoop back down, holding your finger on the touch screen to activate your slam (for extra points), the velocity feels tense and exhilarating. It’s even better if you manage to bop an enemy from on-high, and then proceed to finish the rest off in one big combo. 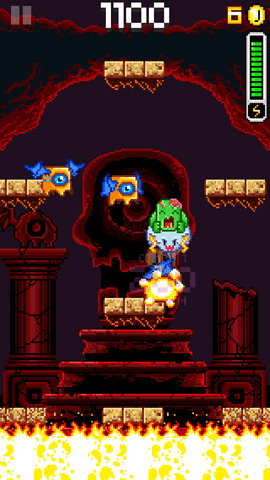 SlamBots is also about staying alive for as long as possible. The further you get without dying, the tougher the enemies become, but the more points you’ll get for killing them as well. This is where the game’s depth starts to come in: it’s not simply a case of bouncing on heads, as you really need to pay attention to where you’re positioning yourself as well.

Enemies have different movement patterns – some will scroll across the screen; others will lurk around near the top platforms; and some will even zoom up into the sky and then come darting back down, catching your unaware. Then there’s the fact that there’s no time limit, and therefore no rush. If you are down below, and there are tons of enemies around you, it’s all about biding your time and waiting for the right moment to strike, so as not to get hit from above.

There’s also a section above each level that contains tons of coins to collect – and coins are important, as they allow you to unlock new levels, skins, and upgrades. As I said, there’s a whole lot of depth and entertainment to this game that doesn’t immediately meet the eye. 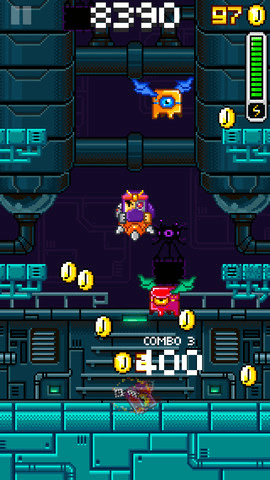 The coins, however, were a bit of a sticking point for me. It takes absolutely ages to unlock things in SlamBots, and you’ll need to keep playing over and over and over again to receive, for example, the additional levels. Of course, you can pay money to unlock them right away, but those hoping to simply grind their way towards everything the game has to offer will most likely never manage it (unless you’re willing to put a silly number of hours into the game).

It’s not just the in-app purchases that are a slight downer on the main course, either. Some obstacles (such as the fire platforms) feel overly harsh, and it can be a huge pain in the bottom when you’re bouncing along, minding your own business, just to have an enemy conjured up in the very spot that you’re currently residing, and with only a small amount of warning, resulting in your death. This can be hugely frustrating as a lot of the time it can feel completely out of your control.

SlamBots is good solid fun, and a novel experience based on a seemingly simple idea. If you like to bop every now and again, this is definitely one for you.