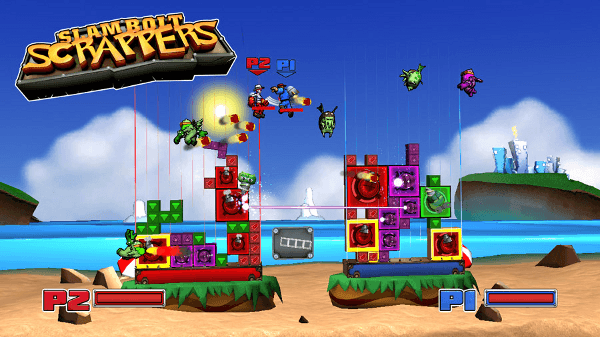 Slam Bolt Scrappers is one of those video game experiences that you can sense is definitely onto something special with its core concept, but unfortunately fails to capitalize on the idea fully.

In mixing Lumines-like block-matching with a side-scrolling beat-em-up, Slam Bolt Scrappers can’t be accused of lacking an innovative edge. But the area in which the game really shines – the multiplayer – is thrown off course somewhat by the lack of online support.

You control a floating character who must place Tetris-shaped bricks onto a platform. As you drop the blocks into clusters, any same-colored bricks will form together in squares to make cannons, shields, drills and many other offensive and defensive weapon types. They’ll then begin to lay into your opponent’s brick pile – completely take down the enemy pile, and you win.

But it gets a little trickier than this. First off, you can’t just pick up new bricks. Weaker enemies float into play, and you need to fly up and smash them in the face to release the bricks from inside. There are also tougher enemies that will appear, and special ninja enemies who have special abilities inside them.

And that’s not taking into account that your opponent can also zip across to your side of the playing field, knock you about a bit, and potentially knock you out of the game for a good 10 seconds. Hence, it’s a balancing act between building your tower, punching enemies in the face, and keeping your opponent at bay too.

Slam Bolt Scrappers throws a variety of different weapons and abilities your way, plus numerous level types, such that there’s something new to explore for a good few hours. It’s relatively good fun too, and attempting to build a ridiculously huge square cannon before the enemy has time to knock it down is a challenge in itself. 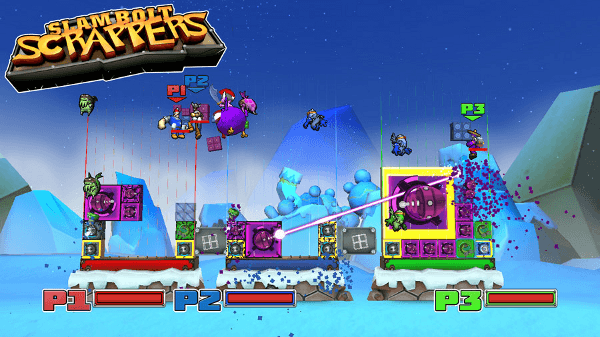 But the game’s focus on variety is also its downfall. During play, it’s not really obvious what you should be focusing on, which makes play a little awkward. Should you be building? Should you be beating opponents up? A lot of games end up with players laying into each other over and over, and only bothering with tower building whenever they’ve killed someone else.

There are issues with the core gameplay too. The controls feel a little too floaty at times, while the in-air fighting is extremely simplistic and very button-bashy. In fact, I found that it makes a lot more sense to simply hit the same attack button over and over again, rather than using the combinations that the game suggests.

But where the game really stumbles is in its lack of online multiplayer. The problem is that the single-player campaign will only hold your attention for so long, as the AI is a bit predictable and boring. Multiplayer games are far more fun, and can be an absolute blast at times – but you’ll have to get up to three friends sat around your PC if you’re going to take full advantage of what the game has to offer. 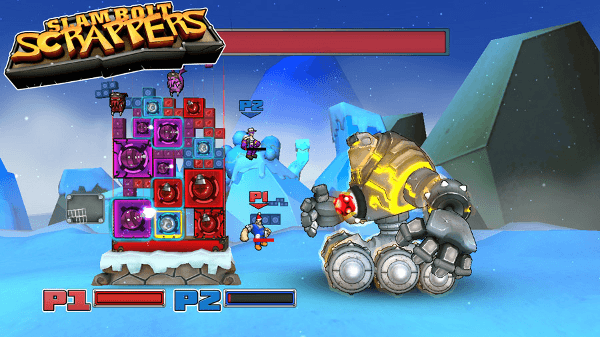 Of course, this means you’re going to need four wired Xbox controllers (the keyboard controls aren’t worth bothering with), and four spare USB slots on your PC to connect with. Slam Blot Scrappers really could have done with online multiplayer, and it really brings down the whole package as a result.

So then: If you have four wired Xbox controllers, and a big enough PC monitors such that you and three friends can sit around and give it a play, then Slam Bolt Scrappers is worth a punt for a good evening of entertainment. Otherwise it’s best to pass on this as an interesting concept not pulled off to its fullest.