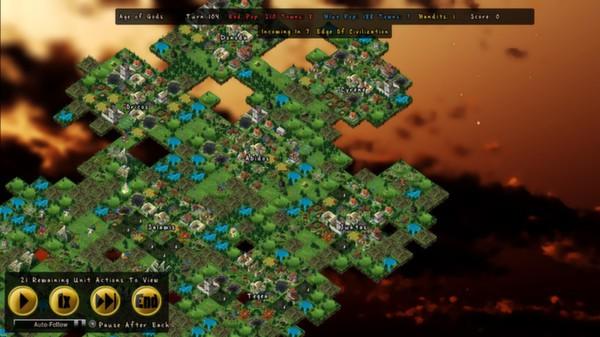 A god game with a twist, but a lack of execution.

Skyward Collapse is a god game with a twist. Instead of leading your people to victory over non-believers, you lead two sets of people to a state of geopolitical equilibrium. In doing this, you must ensure that both sides are powerful enough to survive and flourish in a dangerous, mythological world, but that neither gains enough of an advantage to wipe the other out. It’s an interesting idea, but it leaves something to be desired in execution.

At its core, Skyward Collapse is a fairly simple proposition: create, nurture and maintain balance between two ancient peoples, the Greeks and the Norse, as they expand their holdings in a world populated by creatures both real and mythological. In practice, it’s somewhat more complicated. Their shared realm is wracked by “woes,” natural (and supernatural) disasters that can turn things upside-down in an instant, and beset by endless hordes of wicked, murderous bandits. They’re also unrelentingly warlike and antagonistic toward one another; you might think that as an all-seeing god, you could convince them to knock it off, but no – they are determined to fight. Since you can’t stop it, you’re left with Plan B: keep it going forever.

You begin by selecting from more than a half dozen maps, each with its own unique features and challenges, and a difficulty from the beginner’s tutorial all the way up to expert mode. There’s also a “sandbox” option that allows for limitless moves and no endgame, so you can experiment with various strategies. You can adjust the number of turns per round from 30 to 50 – there are always three rounds in every game – and tinker with things like “woe frequency” and scoring requirements.

Once you’ve set your desired game conditions, you’re presented with an isometric view of a grid-based map, with a settlement for each race located more or less in opposing corners. Beginning settlements consist of nothing but a town center, to which you will add a fairly conventional stable of strategy game facilities like rock quarries, pig farms, carpenters, smithies and smelters. There’s also a small selection of military buildings that produce units for combat; aside from the special mythological units, these are the only mobile units in the game.

But you’re not just a commander-in-chief: you’re a god, and that means you can do more than just order the erection of structures and recruitment of men. You can place terrain tiles – forests, marshes, mountains and so forth – replacing the existing landscape or adding it onto the floating map and expanding its borders. Other settlements may (and almost must) be raised elsewhere, allowing both cultures to push out beyond their very limited initial borders. And when things get out of hand, you can unleash unique mythological units – elves and minotaurs, giants and centaurs – which can give one side an immediate and vast advantage over the other, and serves as a handy (but sometimes risky) way to restore a tilting balance. 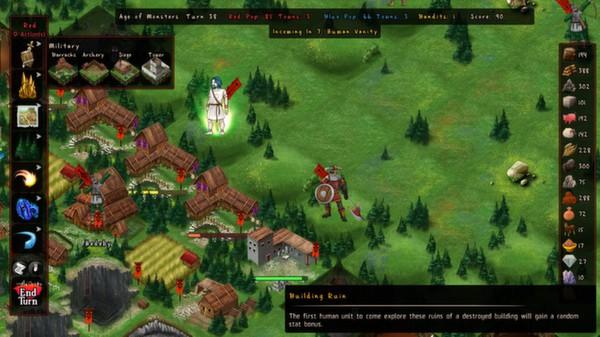 In many ways, Skyward Collapse plays like a very straightforward turn-based strategy/city management game, but its rule set is designed to provide a different experience than most superficially-similar games. For one thing, structures destroyed in battle cannot be built upon again, so if a town begins to crumble under an onslaught, you’d better be ready to find someplace new to live. You also have virtually zero command over military units, as they’re almost entirely controlled by AI; you can direct them to attack enemy gods who take the field, but otherwise they’re going to do what they think is best. And resource management is minimal, as resources are supplied as needed by facilities that can be placed anywhere, at any time.

It occurred to me almost immediately that the obvious way to avoid an apocalyptic extinction event for one side or the other would be to simply not build anything and run down the clock, but the developers saw that cleverness coming and took steps to ensure that passivity is a road to ruin. For one thing, the game has minimum scoring requirements in all but the sandbox modes, and if you fail to meet them – say, 1000 points by turn 30 – you lose. There are also, as mentioned, bandits who grow steadily stronger after they appear, and lay waste to your kingdoms if your recruits are not sufficiently muscular to defend themselves. “Woes,” meanwhile, which encompass everything from floods to the perils of hubris and mythical catastrophes like “Thanatos’ Gathering,” often have a less direct impact on your people, but can make a big mess in a real hurry by doubling one side’s resource production: turning great swaths of land into water (destroying whatever happens to be on that land in the process) and wreaking all kinds of other havoc.

Skyward Collapse boasts a number of more advanced features as well, including 16 god units with various powers and abilities, a dozen unlockable buildings you’ll gain access to as you level up, cooperative multiplayer for up to eight people, and a whopping 84 Steam achievements. There’s a lot to see, do and learn, but you’ll have to work for it; this is a game that makes no apologies for its difficulty or the investment of time and effort it demands. 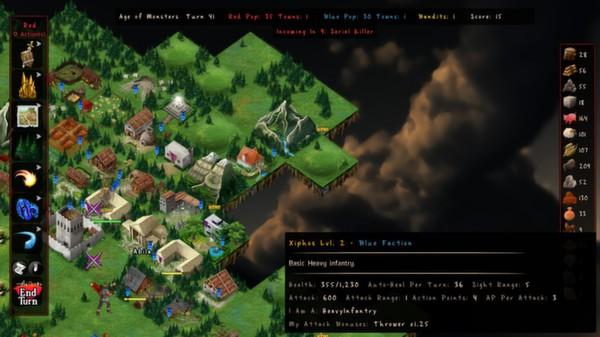 It sounds very cool, and as a strategic exercise for people who enjoy that sort of thing, it probably is; but as a conventional video game, the reality is somewhat less appealing than the idea. The interface is simple and the graphics are decent, but the “bells and whistles” factor is almost zero. The game launches directly to a very spartan menu; units are static sprites that just drop out of the sky when they’re placed, and move by merely floating across the map; battles consist of those same non-animated sprites bumping into each other until one of them spins off the map; and even the music is very generic, waiting-room-style stuff that feels as though it’s being used because the developers figured the game needed some kind of background noise, and this is what they could get.

It may not be entirely fair to hold a very abstract strategy game to the same standards as, say, Angry Birds, but Skyward Collapse was very clearly made by hardcore strategy nerds, for hardcore strategy nerds. It’s a deeply niche game, and odds are that if you’re reading this, you’re not in that niche. The tutorial speaks volumes: it covers the basics of the mechanics and how to “properly” start a game, but it also states numerous times that saving, reloading and experimenting with different tactics is an effectively mandatory part of the learning process. You are quite obviously expected to find your own way.

Skyward Collapse may be good for what it is, and if the idea of a mildly obtuse strategy challenge that’s light on the sizzle doesn’t put you off, then there’s no question that it’s an unusual take on a genre that doesn’t get much love these days, and has the potential to keep you busy for weeks. But if what you’re looking for is some sort of Populous Redux or a spot of accessible, mainstream strategy fun – something more Plants vs. Zombies than Pacific War – then it’s probably just going to leave you scratching your head and looking for something else to do.

Hope: The Other Side of Adventure Review