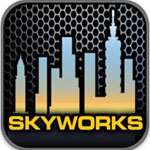 Contrary to popular belief, architectural wonders of the 20th century aren’t painstakingly planned and constructed over months and years. They’re built like sandwiches in 45 seconds. That’s what the iPhone game Skyscrapers would lead me to believe, and I see no real reason to doubt it. Taking the addictive formula presented by prize-bearing amusements like Stacker, Skyscrapers puts you at the forefront of tower building technology. Who knew that you could put up buildings just by tapping the touch screen? Ahh, the wonders of science.
Like the prize-hungry game Stacker that you’ll find littering your local malls and eateres, Skyscrapers is a game about speed and timing. Each stage is made up of so many “levels,” or slices of floor that you’ll need to build. Each of these levels moves across the screen from left to right, starting over again at the left when it runs out of screen. Your job is to tap the screen as soon as a new level lines up with the one beneath it. Simple enough in theory, no?
As the buildings grow taller and taller, the speed begins to ramp up. As this happens, the width of the area you’ll need to match will begin to shrink. This means every stage will be a good deal more difficult by the end than it was at the beginning. After the first few stages you’ll find yourself scrambling to line up tiny antennas on the tops of buildings in a frantic and fun nightmare of precision.
Despite the climbing difficulty, the gameplay in Skyscrapers is surprisingly forgiving. If you’re a little too far to the left or right, Skyscrapers sweeps that fact under the rug. It’s a great way to keep the gameplay accessible, but it also removes a layer of depth to the challenge. Still – as a game that keeps things moving at a pretty good speed, Skyscrapers is anything but a walk in the park.
When you tap incorrectly twice, your game will end and you’ll need to start all over from the beginning. It’s an old school style challenge, but it’s one we could do without. Back in the days of the arcade when a new game would cost you a quarter, this was a brilliant business strategy – but it was never something that favoured gamers. In this day and age there’s simply no excuse for it. If anything it feels like a cheap ploy to lengthen what would otherwise be a relatively short experience. With only 11 towers available, getting you to start at the beginning after every failed attempt is bound to stretch out your playtime. A big part of the fun in Skyscrapers is seeing which buildings would be coming next. Having to start at the beginning every time really wrecks that fun.
There’s not much more to this package than the game itself. The only other notable inclusion was the “View My Cityscape” mode. While in no way integral to the gameplay, it allows for a fun little glimpse of all the buildings you’ve built so far. It’s a great idea, delivering that same sense of accomplishment that Civilization players feel when viewing their cities up close. My only complaint is that your buildings are set against a backdrop of other buildings, and while you can distinguish which is which by the shading, it just sort of took the wind out of our sails to see that so many other buildings were already there. It’s silly, I know, but if it’s my cityscape, it should be MY cityscape!
Skyscrapers offers a good deal of fun that should appeal to fans of twitch gameplay and short experiences. With levels you can play in well under a minute, Skyscrapers is an excellent title for the iPhone gamer on the go. If you’ve ever found yourself sinking dollar after dollar into the Stacker machine at the mall, Skyscrapers is bound to save you a few pennies in the long run.