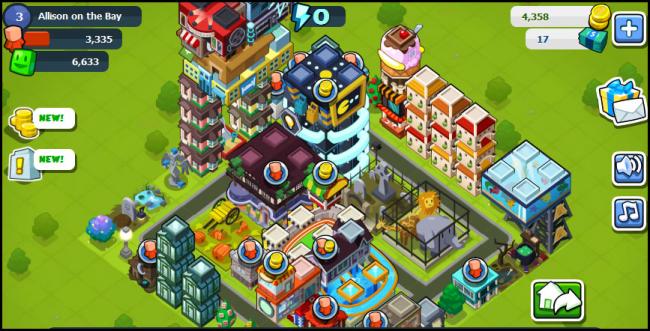 At first, there was only the farming simulation type of social game on Facebook. But in the past few years the city-builder has also risen to insane popularity. As such yet another is making an appearance in the form of Skyscraper City. Hosting most of the core elements that make the genre what it is, the new application does attempt to change things up rather drastically with the inclusion of amusing events and an almost LEGO-style manner of construction.

As with all city-builders, the primary objective of Skyscraper City is to construct a bustling metropolis. You are greeted with many of the common mechanics of the genre, which consist of managing population, income, and happiness. In order to raise the first, homes must be built; for the second, commercial structures are needed; and the last requires decorative elements to improve (similarly to Millionaire City, these also boost the revenue of nearby buildings).

Along with these mechanics, everything must be powered by a power plant of some sort. Each one of these provides a set amount of electricity and once a structure is created, some of that is sapped. Additionally, for power to be delivered to a building, it must be connected to the road system of your city. At least the base of it has to be.

Yes, that is the key word, “base,” and is in fact one of the more unique aspects of Skyscraper City. Unlike most of the city-building games currently on the market, this title moves a away from constantly having to expand outward to make a bigger town. Instead, you can move up. Each structure resembles a LEGO with connection points atop them. From these connection points, other buildings can be stacked on top of them up to a certain height. It’s actually a pretty interesting feature as it lets you create rather unique looks for your virtual city.

Of course, you are also capable of expanding your city outward, but doing so will require the demolishing of the city slums. Kind of like how the wilderness encroaches on you in games such as FrontierVille, a constant deluge of crude-looking buildings will sprout up and around your town that will require you to destroy and make way for newer ones.

This isn’t so much a pointless inclusion though, for the destruction of these buildings actually leads to the collection of various building materials. These are things like mortar, cement, drywall, and so on. Such items then become a requirement for constructing the newer buildings. However, should players not have the items needed to finish construction, they can always be gifted by friends. 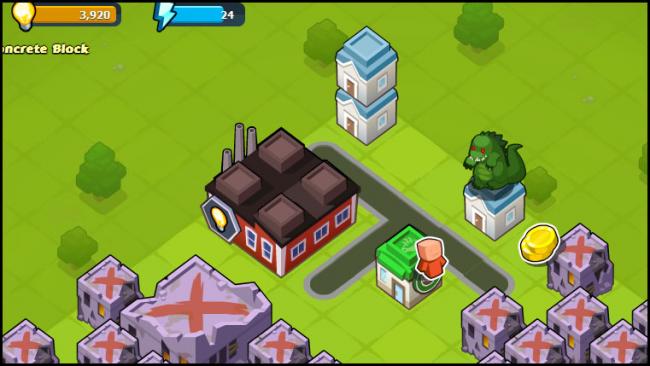 What is also interesting, and rather amusing, is that random events will occur when demolishing slums. These aren’t that significant in terms of reward (you may earn a bit of experience), but are still fun. For example, when demolishing some slums, a cartoonish Godzilla look alike decided to leap out and start doing a jig on the skyscrapers and, literally, needed to be punched out.

While on the topic of cartoonish visuals, this is something that is going to be a little hit or miss for most users. Since the buildings are sort of like LEGOs, everything in Skyscraper City has a very colorful, yet blocky, look to it. It doesn’t exactly look bad, but it will look a little bit odd to many an eye. After a while though, the aesthetic does tend to grow on you.

But this is really the only significant qualm that can even be noted. While the genre of the city-builder has been done to death, Skyscraper City does a pretty good job of making itself stand out as unique. It reuses many of the common features found in such games, but the style and concept of, for lack of a better term, “LEGO-buildings” makes designing virtual spaces all the more fresh and interesting. The cartoon Godzilla didn’t hurt either.