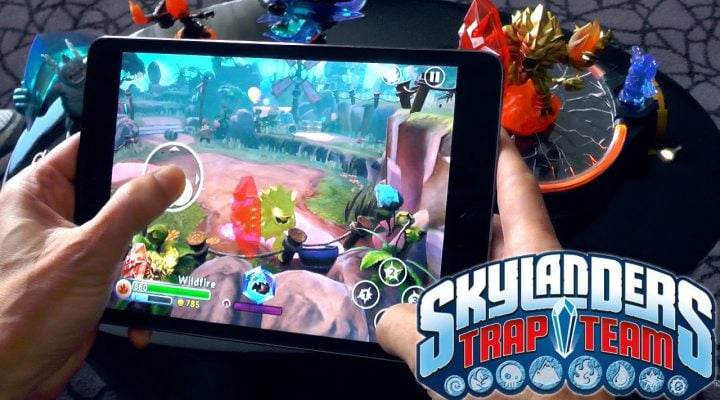 Proves that console games can be done on mobile devices.

More content than you can shake a stick at.

Like all Skylanders games, buying toys can become an expensive hobby.

A rechargable portal would have been preferred.

Recent reports suggest that PS4 sales have hit around 10 million worldwide, and the Xbox One roughly half that. By contrast, estimates suggest 195 million tablets were purchased in 2013. It doesn’t take a math whiz to know which of these is a bigger number.

If you’re a publisher, the temptation to take your top-tier franchises to tablets and smartphones must be overwhelming. But despite their smaller sales, home consoles have a certain amount of horsepower that lets them pull off amazing feats that tablets could never do, right? 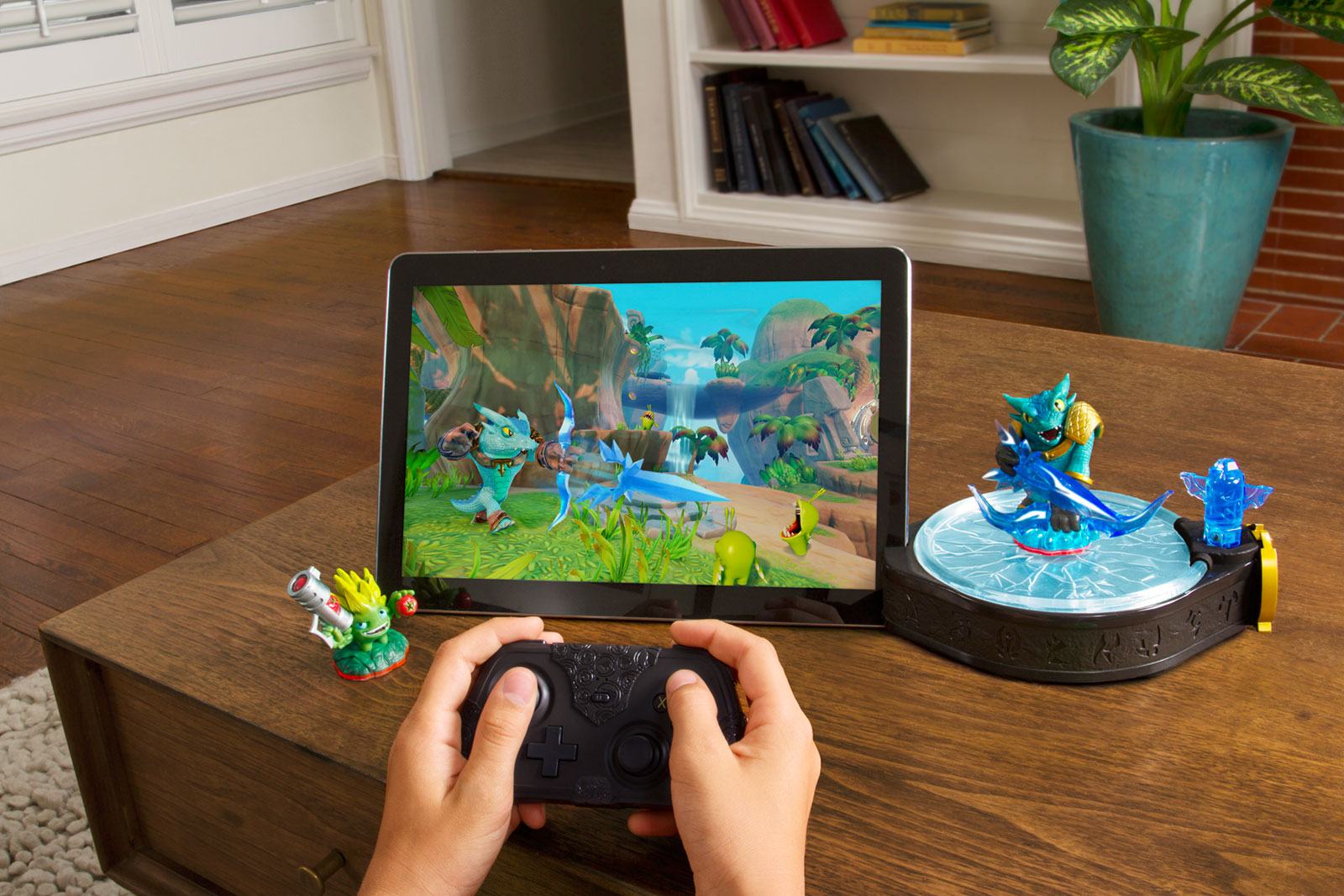 The fourth game in the series and first to appear on tablets, Skylanders Trap Team is every bit the game you’ll find on modern consoles. This isn’t some clumsy, stripped down port. There haven’t been sacrifices. There haven’t been stumbles. This is a $75 console game that you can play on your iPad or Android tablet instead of on your TV. 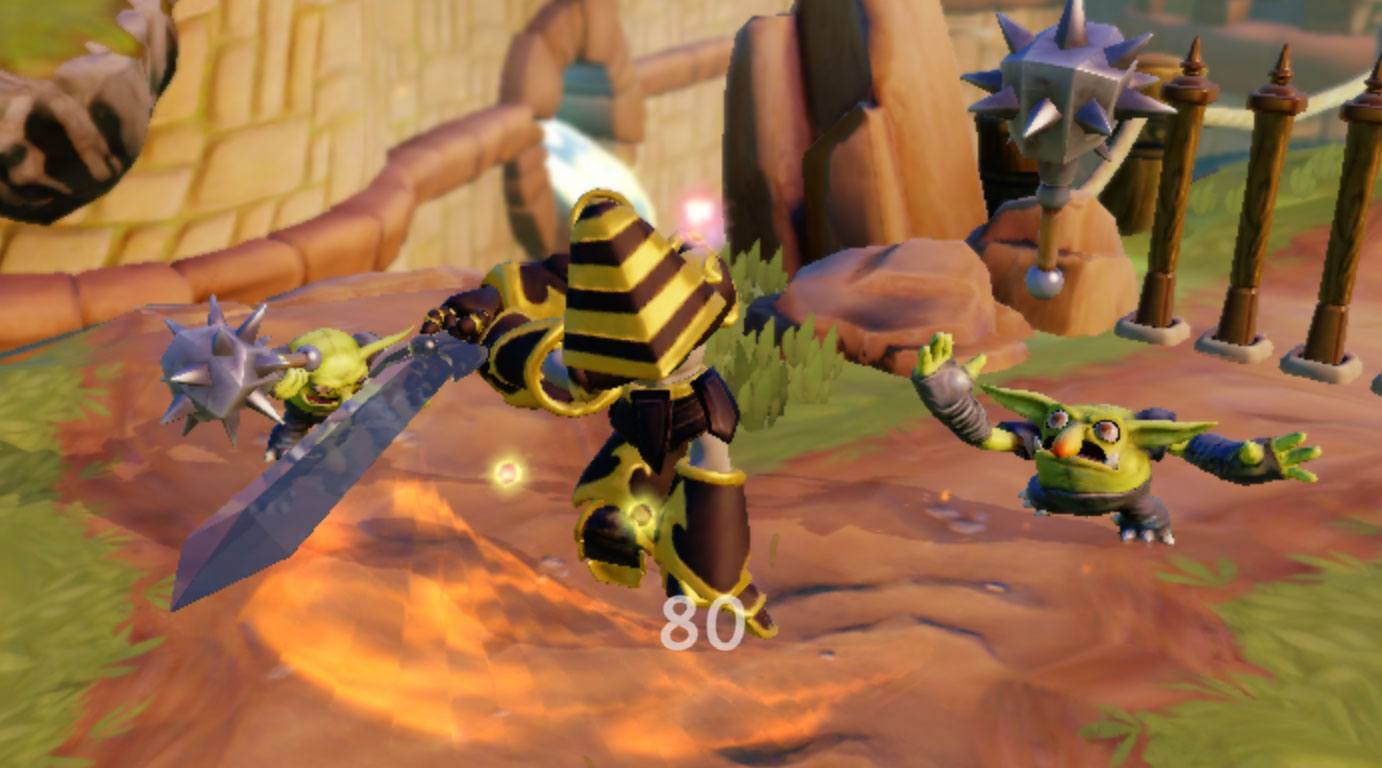 For those of you not familiar with the Skylanders franchise, here’s a quick cheat sheet: debuted in 2011, Skylanders is a third-person action platformer aimed at kids, in which they catch and play as monsters possessing different powers and abilities. And by “catch” I mean “there’s a catch!,” because unlike other games with plenty of monsters to collect, this one is powered by gorgeously-sculpted physical toys. So every new monster you want requires a quick trip to your local retailer and a handful of dollars. 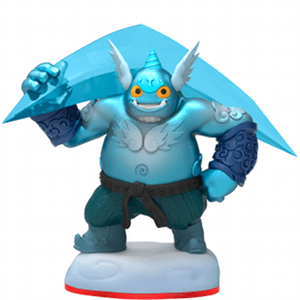 If this sounds greedy to you, then I promise, Skylanders just isn’t your bag. There are plenty of folks out there who love the opportunity to collect and play with new figures (myself included), and it’s done so well that both Disney and Nintendo have aped the formula.

Despite this being the first entry in the main series to release on tablets, toys from past console versions are all compatible with Skylanders Trap Team. What’s more, all of the experience, currency, and wacky hats those characters have earned will carry forward with them to the new game.

Let’s slow down and think about that for a minute: toys that I purchased for an Xbox 360 game in 2011 have saved and stored the progress for me to continue their adventures on my iPad THREE YEARS LATER.

Technology is magic. Activision is run by wizards.

As with each passing entry in the series, Skylanders Trap Team introduces a new twist. This time around, it’s trapping villains to collect and play with. To do this you’ll need traps that match the game’s different elements, which, aside from the two in the starter pack, are sold separately.

Traps can be reused on different villains, though, with the unused baddies going into a vault that you can access between stages. So no, you’re probably not going to go bankrupt buying traps. 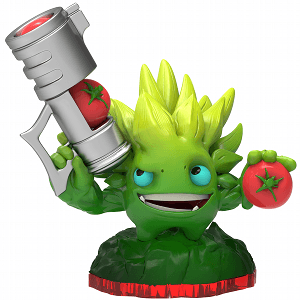 In addition to the main game, players will be able to pass their time with a few additional modes like Arena and Kaos Ultimate Challenge. I prefer to refer to them as modes rather than mini-games, because there’s really nothing mini about them. In fact, Kaos Ultimate Challenge is a meaty enough offering that I would have happily ponied up $15-$20 to purchase it separate from the game.

If you decide to tackle the Ultimate Challenge (and I highly recommend that you do), you’ll find a simplified variation on tower defense that feels a little like a standard arena game, but forces you to spin a few different plates at once. Towers will to protect you (and the loot chest that can’t fall into enemy hands), but they’ll also take damage and are only healed by your presence. So you’ll find yourself dividing your time between slaughtering waves of bad guys, healing towers, and protecting treasure.

Also, it’s an amazing way to level up weaker characters once you’re too far in the game to break out that new Level 1 toy.

Skylanders games have always offered a great mix of humor, gameplay and presentation, and Skylanders Trap Team is no different. What surprised us, though, was how much thought seemed to go into solving the external problems of connecting Skylanders to tablets. 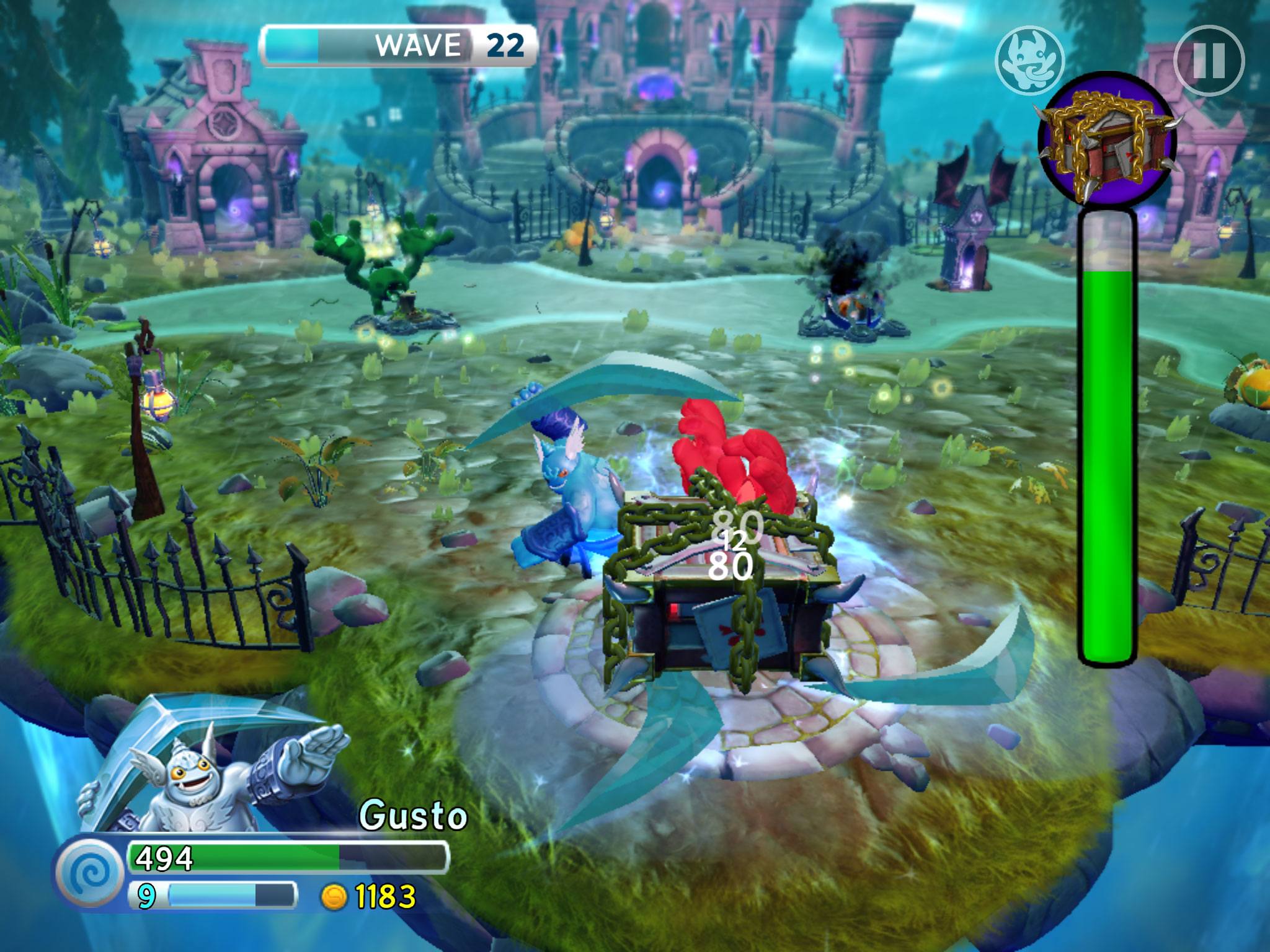 In addition to the game, you’ll be given a “Traptanium Portal,” aka the base you’ll put your figures on, and a controller that can only be paired with the game. Both are bluetooth, freeing up your tablet’s ability to charge (which you’ll want to do on marathon sessions). The portal also doubles as a stand for your tablet, setting the device at a perfect angle and ensuring the portal itself is always close at hand (which is good, because you’ll be switching Skylanders often).

The game is also a free download on the App Store, with the portal and controller acting as your key to unlocks the full version. This means that, even if you switch devices somewhere down the road, you won’t be forced to buy it again.

Multiplayer is supported so long as you have a second bluetooth controller, and you can even continue your adventures on the go with touchscreen controls that feel like a natural fit. Heck – there’s even a cardboard insert to stick your traps into so that you can keep track of which villain is in which trap. How cool is that?

The only complaint to be had is that your portal is going to run out of battery long before your play time, so you’ll have to grab a few fresh AAA’s to keep going. Why it’s not rechargable is beyond me. 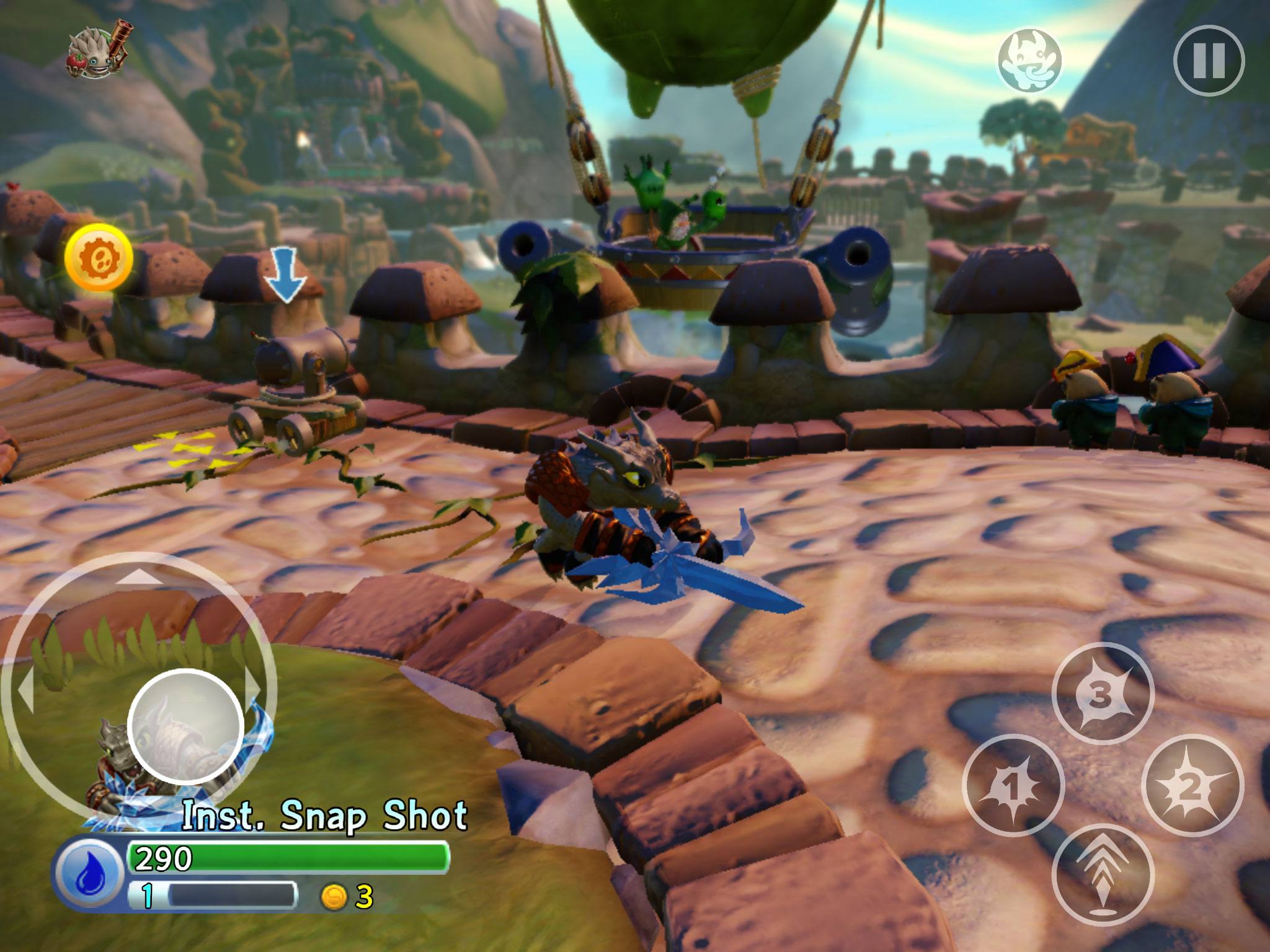 You might find this hard to believe, but Skylanders Trap Team was a hard game to review. It exists so far outside the norm of what we’d consider mobile games that our standard measurements cease to have any real meaning. Competing against Skylanders Trap Team is like competing against Tony Stark in a science fair. It’s just in a completely different class than anything else out there.

If it sells well, though, it won’t be alone for long. Skylanders Trap Team has raised the bar for iOS and Android gaming to a whole new level, lighting the beacon for other AAA console game developers. Don’t be surprised if the shelves are full of retail games for tablets and smartphones next Christmas.

Skylanders Trap Team for tablets will be available for purchase from major retailers on October 5th.