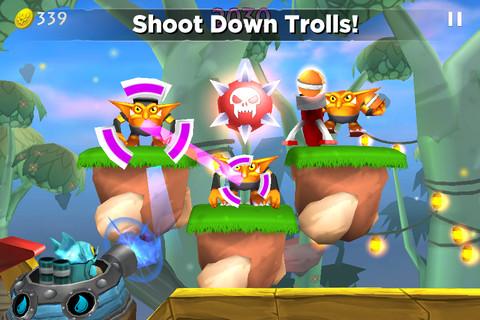 As a parent to a 7 year old, there’s no questioning that my family is the target market for the Skylanders franchise. Over the holiday season we revelled in its great family friendly console game that offered up a top-down shooter with just a hint of light RPG character development. We spent weeks upon weeks trying to track down that one particularly hard to find character in the immediate area (for us, it was an air Skylander). And so, when we learned that the brand was coming to the App Store, we couldn’t help but get a little excited.

And while this new mobile game is nothing like the Skylanders home console release that had come before it, it turns out that our excitement was well warranted. Skylanders Cloud Patrol is and endless arcade shooter that plays out very much like a cross between a carnival game and Jetpack Joyride, but at the speed that would put Chuck Yeager to shame.

The story in Skylanders Cloud Patrol is simple, but manages to help frame the endless action that’s waiting around the corner. Some trolls have enacted a jailbreak, and it’s up to you – an illustrious member of the Cloud Patrol – to take to the skies and blast them all from the comfort of your gunship.

To do this, players can simply tap on each troll to send them flying – but as with any good game, the easiest way is rarely the best. The challenge here is to draw a line from troll to troll to try and take them out in one big combo – but doing so comes with an equal amount of risk and reward. Sure you’re risking the possibility of blowing up a bomb, or giving one of the trolls enough time to land an attack on you – but if you succeed you’ll be rewarded with a nice fat bonus in coins.

Of course if you don’t succeed, it’s game over.

Yes, Cloud Patrol takes the “one hit and you’re dead” approach to game design, but that’s honestly not any different than what you’ll find in games like Temple Run or Canabalt – and despite the vastly different gameplay style, the overall vibe is very much the same as what you’d find in an endless runner. In fact, Cloud Patrol is easily one of the best games in the endless/high score mobile genre we’ve seen yet. 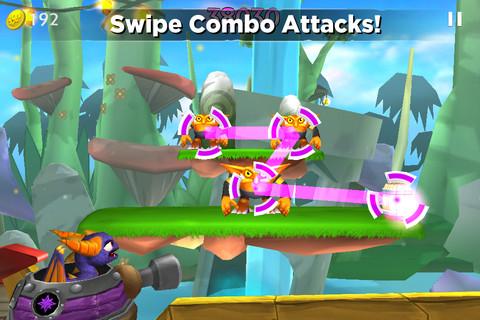 And while the gameplay might look like a carnival shooter, the influence of games like Jetpack Joyride swims right below the surface. In fact, some of Jetpack‘s best motivators are here. You’ll constantly be working on a variety of goals that, when completed, will earn you stars that can level you up. This in turn will reward you with the game’s premium currency – gems. Gems can be used to unlock different power-ups, as well as different Skylanders to jump into your gunship.

And while gems can be purchased like any other premium currency, Cloud Patrol is really liberal with handing them out through the course of regular play. And in a fantastic twist, any of the characters or power-ups that you own the character figure for from the original Skylanders can be brought into the game at no extra charge (provided you kept the code for each figure). Oh – and the coins? Those can be spent to level up the different power-ups in-game, giving you added incentive to keep hitting those trolls where it hurts.

The only disappointment to be had with Skylanders Cloud Patrol was in the Skylanders themselves. They don’t come with a special power or different strengths and weaknesses, so switching between Skylanders is purely cosmetic. There’s a nice touch in that every day a different element will be featured, and using a Skylander of that element will give you a coin bonus – but considering how varied and unique each character is in the original game, seeing that element completely gutted here is something of a letdown.

Whether you’re a fan of the franchise or simply love a good endless mobile game, Skylanders Cloud Patrol is an absolute must buy. The fast-paced finger-drawing, variety of enemies and formations, and plenty of upgrades to unlock will keep you coming back again and again. And who knows? Maybe this can be your gateway into the great home console release too.