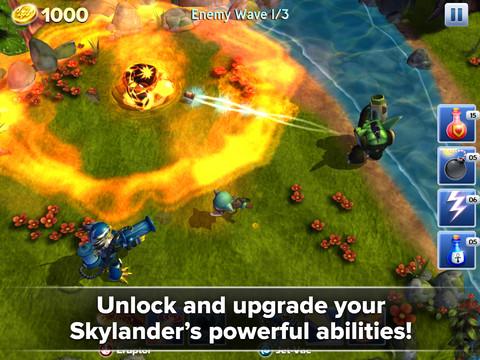 Skylanders Battlegrounds is a little too shallow for its own good

Since its debut last fall, Skylanders has proven to be a brand that appeals to just about every level of gamer. Kids and parents alike adored the original home console release. Mobile gamers revelled in the arcade frenzy that was Cloud Patrol.  And earlier this month, free-to-play city-builders fans were given a chance to set up shop in Lost Islands. Considering the franchise’s far reach, we were hoping that Skylanders Battlegrounds might live up to its promise of a strategy-heavy alternative. Instead, although it remains as accessible as its counterparts, it only contains a fraction of the lustre.

Battlegrounds tasks players to complete missions using a pair of Skylanders that they can change up at any time.  Missions run the gamut in terms of description (“defeat these enemies,” “recover these items”), but they always manage to play out the same:  You’ll explore a hex-based environment during the game’s turn-based phase, and then switch to a real-time experience for combat.

In a game like Battlegrounds, which basically boils down to “walk around until you get in a fight,” combat can make or break a game.  Unfortunately combat is more of a “break” than a “make” here. Players will need to draw a line from their Skylander to an opponent to engage in combat.  Aside from occasionally tapping to unleash a special move or use an item, or drawing a line in a different direction to move them elsewhere, there’s nothing else to it.  There’s virtually no strategy to be had.

Despite the game’s simplicity, battles don’t always go as smoothly as we’d hoped.  Drawing lines from heroes to bad guys isn’t terribly forgiving in terms of responsiveness, so if your finger happens to go just a tick past an enemy (probably because he walked away from it before you lifted your finger), your Skylander will think you’re issuing a movement command rather than an attack.  And since enemies die fairly quickly, there’s a fair bit of line-drawing (and missing) to be had.

As you progress through missions, you’ll earn currency that can be spent on new special moves, new Skylanders, and upgrades to their existing move sets.  All of this feels fairly intuitive, and seeing what different moves each character brings to the table definitely provides a much-needed carrot on a stick.  Having said that, the difference between the characters and their powers is much less distinct than it is in the core games.  Rarely did we find that things went easier in any given situation based on who we brought into battle. 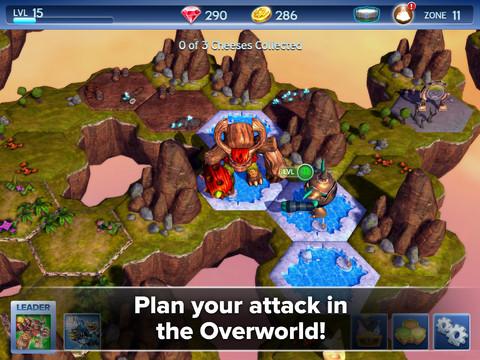 If you happen to own a slew of Skylanders figures from either the original game or Skylanders Giants, you’ll be pleased to know that you can bring those characters into the game with you.  Like Cloud Patrol and Lost Islands, all you’ll need to do is have the character card with the code on it to add them to your Battlegrounds experience.  Even better, there’s a Skylanders Battlegrounds starter set available at retail that comes with figures and a Bluetooth Portal of Power, allowing you to swap characters on the fly just as easily as you would in the console game.  And that Portal is compatible with previous iOS Skylanders releases, too.

Skylanders Battlegrounds isn’t a terrible experience by any stretch, but it’s pretty far from what most adult players will hope for.  And with the unforgiving controls, younger players may find little more than frustration waiting for them.  Still, if you have a massive Skylanders collection and are just itching for another way to use it, Battlegrounds is happy to have you place your favorite figures on its Portal of Power.

The Beast of Lycan Isle Review