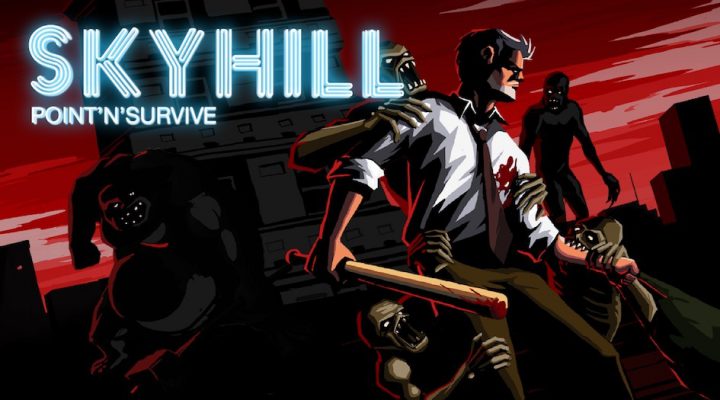 Being able to upgrade anything is a satisfying achievement

Combat is simple and attack accuracy feels off

Skyhill is something I’ve had my eye on for a while. The look and the premise (even if it is just more zombie survival) intrigued me — but honestly, it’s not quite what I was expecting.

Our hero (of a sort) is (was) a business man on a business trip who ended up in the wrong/right place at the wrong/right time. In a last minute decision to live it up a little on the company’s dime, he takes the penthouse suite at the Skyhill Hotel. Shortly after getting to his room, World War Whatever breaks out and bombs of indeterminate origin (are they atomic or chemical? I dunno) are dropped on the city. The entire hotel goes on lockdown, but it seems as if his room is the only one that was spared. 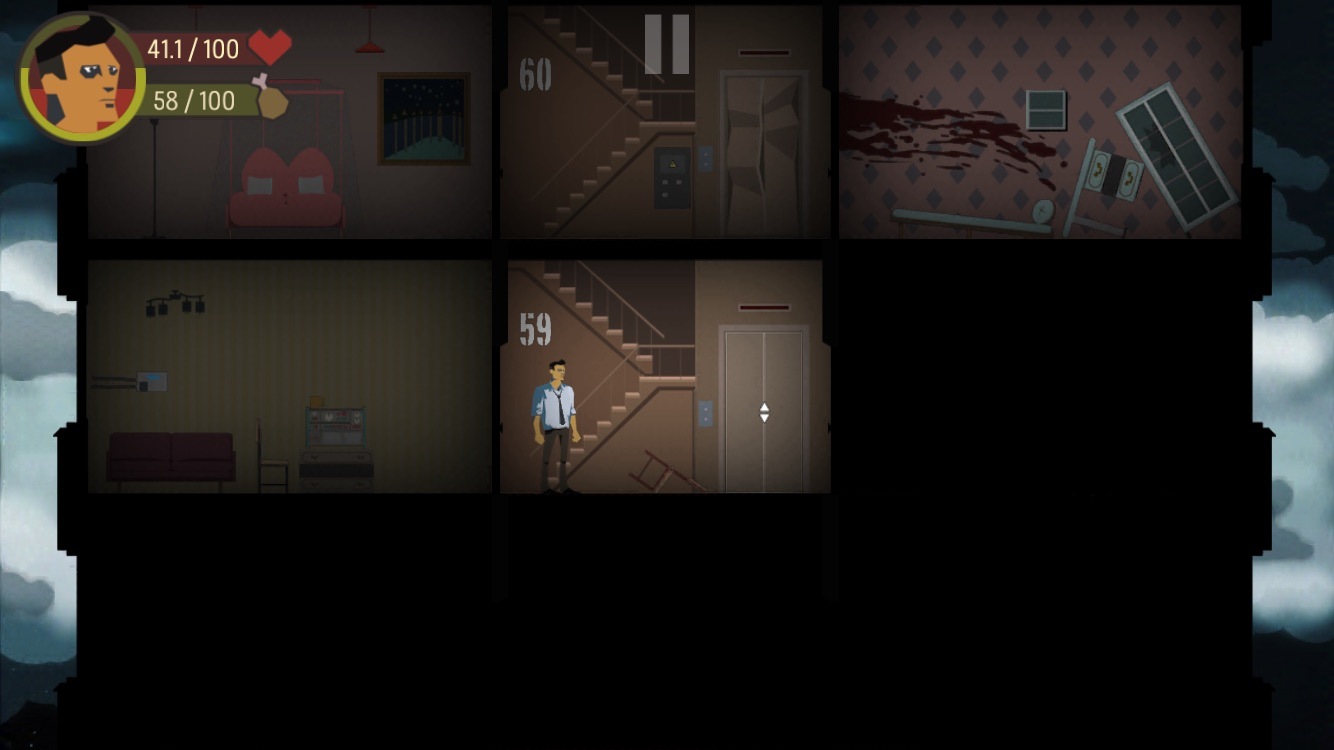 In order to survive, he – and by extension, you – need to reach the ground floor and escape. The problem is that whatever those bombs were made of ended up turning people into horribly disfigured and aggressive monsters, and what few survivors there were have already been eaten. So it’s a matter of meticulously going floor by floor, steadily making your way down while fighting mutants and trying not to starve to death.

I’m really into the slightly different setting: being trapped in a highrise and having to go down, as opposed to being stuck underground and needing to travel up. The Skyhill itself also creates a nice atmosphere with some rooms that are fine, some that aren’t so fine, and evidence of monsters (plus monsters themselves) all over the place. It’s creepy and it’s oppressive and I dig it. The tone even carries over to your survival itself, with the game often giving you JUST enough to keep you walking that razor sharp edge between death and hope. 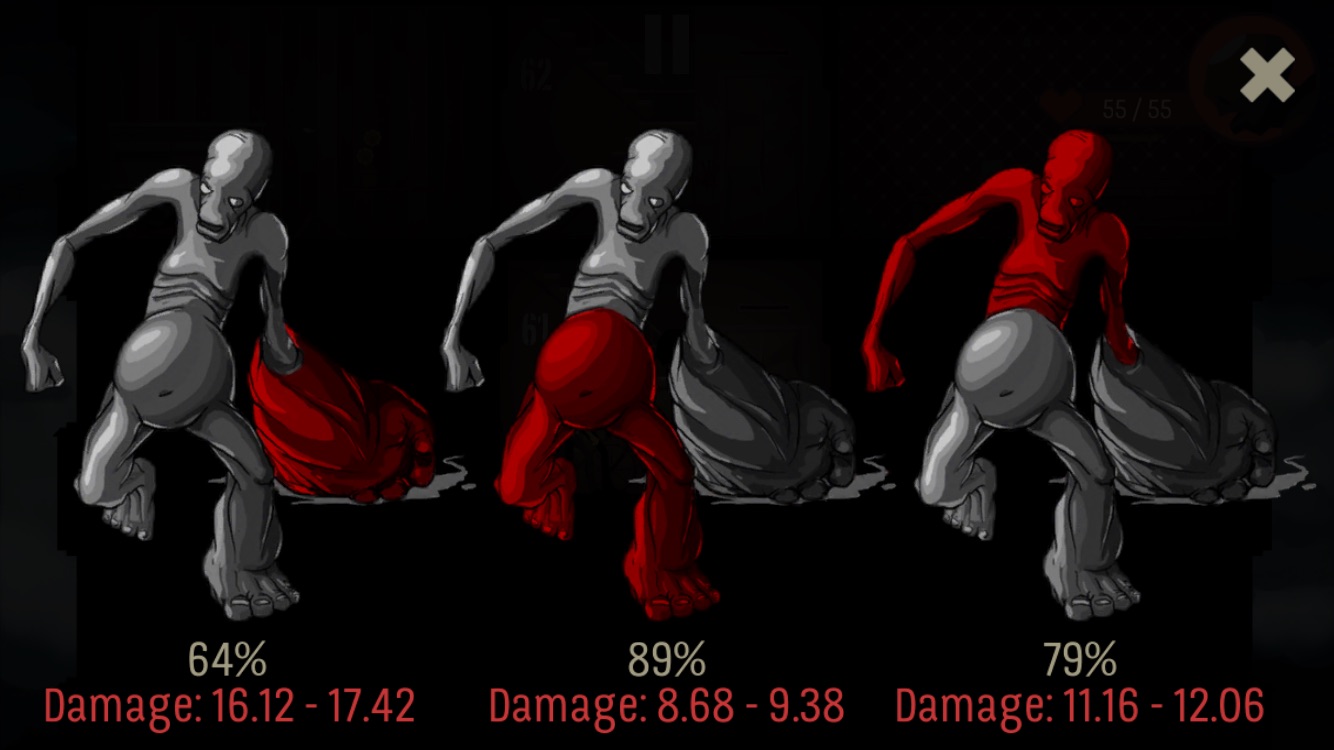 Playing Skyhill is another matter, however. I wasn’t sure what I expected, but it definitely wasn’t this. Progressing from room to room is a simple matter of tapping on the space you want to check. Some objects can be interacted with or searched, but other that that there’s nothing to do in any of these locations. Despite the well-crafted atmosphere the rooms still feel kind of empty, because there really isn’t much you can do in any of them.

There is a crafting system that lets you create new weapons, merge food items into something that’s more efficient at keeping you alive, and even upgrading things in the penthouse suite that will allow you to craft more stuff or get better benefits from sleeping. This is a welcome element that adds a bit more interest to Skyhill’s otherwise somewhat disappointingly shallow gameplay, and it’s definitely satisfying to be able to create and use a better weapon or make yourself a sandwich at the last minute to prevent starvation, but I’m not sure it’s really enough. 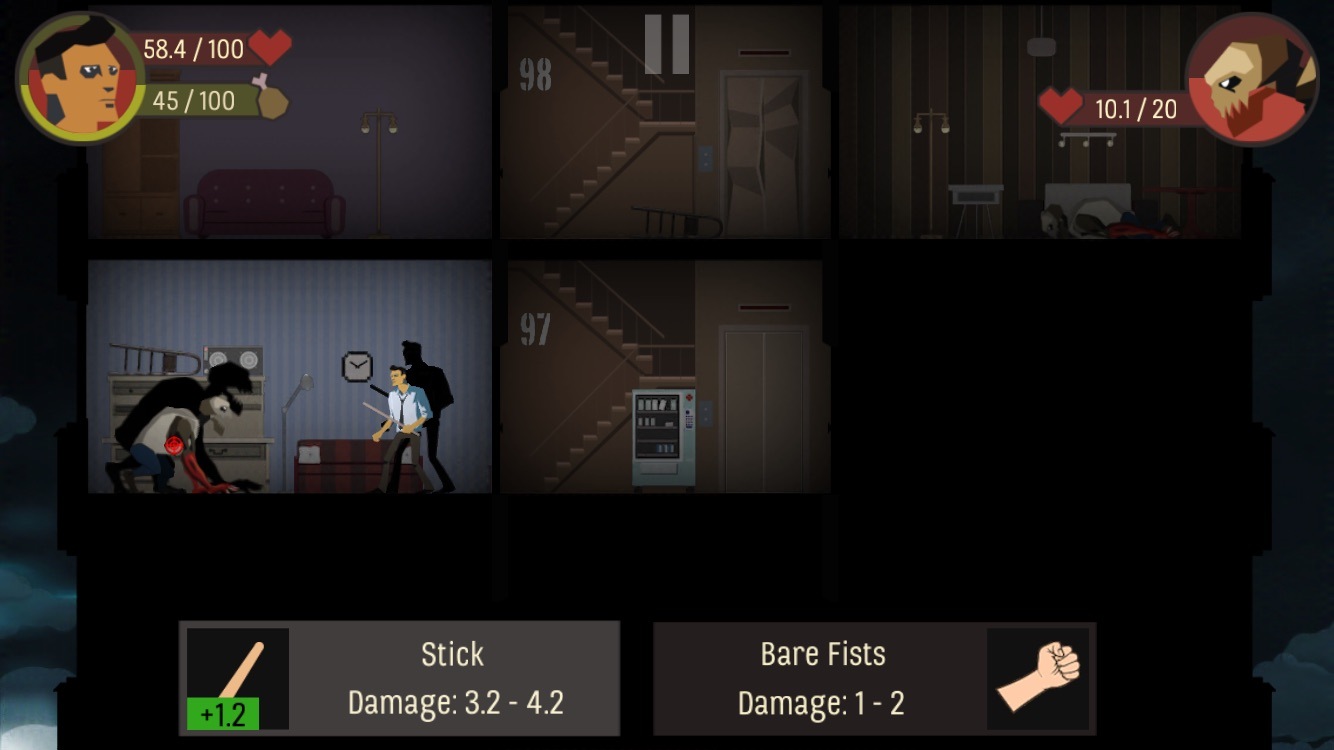 Similarly, fighting mutants is very simple. You select an area to attack (the harder it is to hit, the more damage you can do), then swing and hope the random number generator works in your favor and your attack connects. It’s a system that gets the job done, but the percentages don’t quite match up. I’ve had 50% attacks hit three times in a row, and had several 80%s miss repeatedly.

Skyhill wasn’t what I was expecting, which is a shame, but it’s not bad either. It’s a simplistic zombie (sort of) survival game that requires some careful planning, but doesn’t necessarily require much skill. Conversely, the atmosphere is great. Check it out if you’re looking for a survival game that’s creepy, but also a bit less involved.