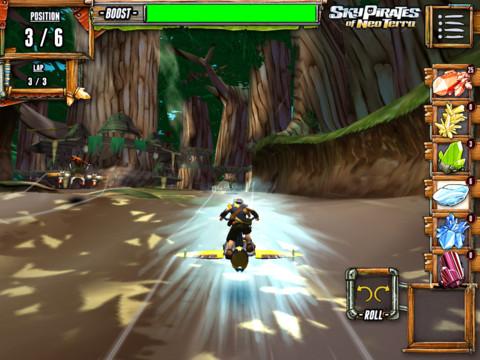 Hide your valuables – pirates have discovered how to fly

If the Lost Boys from Peter Pan had taken to flying about Never Never Land with steampunk “glidewings,” they might have looked a little like the Sky Pirates of Neo Terra. And if you’re anything like me, you’ve never heard of them before. Apparently they were a big enough deal back in the last decade to warrant their own comic series from Image (complete with illustrations from renowned anime artist Camilla d’Errico), and now Fathom Interactive is betting that the concepts can attract racing fans on Facebook and mobile devices. So far, it looks as though they’re off to a decent start.

If you’re a racing fan, you’ll feel as though you’ve been here before. Sky Pirates feels like nothing so much as 1999’s Star Wars Episode 1: Racer, a delightful diversion that outshone the disappointments of the movie itself. Like Racer, Sky Pirates is a game about boosting your glider at breakneck speeds through tortuous passageways nestled against a wide variety of natural settings, and the sci-fi/steampunk ambiance allows for more outlandish moves than you’d get with a traditional car-based racer.

It’s also beautiful at times, especially when compared with the standard fare of racers on Facebook in particular. The default racers unfortunately look a little same-y (Sky Pirates‘ revenue model is largely based on cosmetic options for both your rider and your glider), but the environments themselves sometimes look as though they jumped onto the screen from the pages of the comic series. Obstacles, streams, and portals to different parts of the track all whisk by in a shock of color and action, and the effect is such that Sky Pirates maintains the illusion of speed across all three devices. Elsewhere, the gameplay itself thrives on picking up boosts as you play in the style of Mario Kart and Blur, and, of course, you’re welcome to buy a couple before the race if you’re up on spending premium currency.

It’s a pity that the Facebook version feels so superior to the mobile releases in terms of playability. Even a newbie racer can jump into a glidewing on Facebook and feel comfortable, but mastering the quirks of turning and boosting on mobile devices takes a little more time. Paradoxically, however, it looks better on mobile devices, as the in-game racing visuals sometimes seem as though they were merely scaled to fit on the big screen. The absence of a full-screen option only seems to confirm this.

The key attraction of Sky Pirates is supposed to be that you can play it with other people. The shock, several days after its release, is that there’s never anyone around. This is surprising, really—the franchise boasts a well-maintained Facebook fan page with posts that sometimes net thousands of Likes (a feat even for old hands like Bejeweled), but you’ll almost never see this supposedly devoted bunch in the game itself. On most occasions, I’ve spent my time racing against the competent AI, and I’ve never seen more than one “real” player fill one of the other slots.

It’s usually fun, but as a racer, it lacks something of the finesse and near-perfect controls of a game like Carnage Racing. That may be the point, considering the presumably less-than-perfect controls of a glidewing. It also plays more like a straight racer, and the lack of an emphasis on weapons feels a little disappointing here, especially in light of the potential of a game with “pirates” in its title. But that shouldn’t stop you from taking Fathom Interactive’s glidewings for a ride—you’ll find it well worth a lap or two, and it’s not out to gouge your wallet with premium purchases. Just don’t forget to bring a friend if you’re not keen on playing exclusively against AI for the majority of your playthrough.