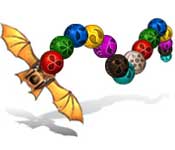 Not all games are for all players. Developers often create their wares with specific audiences in mind, and it seems clear that Alawar Entertainment’s new fantasy-themed marble popper, Sky Kingdoms, is geared not for people new to the genre or even casual fans of such games, but rather hardcore ball blasters who play these games for hours on end until they become so proficient that they can fly through even the fastest-paced, most twisty levels while half asleep. It is, in other words, a challenging game, though not because of any great innovation on the genre’s classic formula.

Sky Kingdoms‘ premise is simple: Players control a winged, ball shooting ship that flies around an island floating high in the sky as they search for a dragon that has stolen one of the gems that keeps these airborne atolls from crashing to the ground.

Our goal, as in all marble poppers, is to destroy lines of balls that snake their way over winding paths toward a game-ending terminus. This is done by firing colored spheres from our craft at like-hued balls in the encroaching line. Match three or more, and they’ll disappear.

There are more than 90 levels scattered over ten chapters, and many have special objectives, such as clearing balls while avoiding incoming blasts or using special power-ups to clear levels as quickly and as spectacularly as possible. What’s more, there are three dozen different—and surprisingly lively—environments, which keeps environmental repetition at a minimum.

Also helping to maintain freshness is a healthy selection of bonus balls (created by matching a ball with a glowing white ring around it) and power-ups (earned by clearing a certain number of balls quickly enough), though their effects and abilities are pretty standard for the genre. Firing a marble at a lightning blast ball, for example, will send bolts of purple electricity down from the top of the screen that take out a random selection of balls from within the line. Hit a bluish white ice ball and it will freeze a small group of neighboring balls; fire again to make them shatter.

You’ll also earn the one-time ability to sort all balls in a given line into groups of colors, as well as the opportunity to set up a provisional cube-shaped blockade to halt a line’s progress.

It’s all pretty typical stuff for a marble popper, with the only real novelty being that we can not only buy but also sell upgrades for bonus balls. Players collect silver coins as they play which are spent on ball improvements that significantly enhance their effects (the difference between a level one and a level two stop marble—a bonus ball that temporarily arrests a line’s movements—is a good five or six seconds).

If you find you don’t much care for the effects of a particular kind of bonus ball you can sell off any upgrades you may have purchased and use the coins you get back to upgrade another kind of ball—or purchase an additional life.

And this is where things get a bit tricky. Players are given only three lives with which to work through the game’s generous helping of levels, and extra lives cost a whopping 20 coins a piece—coins most players would rather spend on equally pricey upgrades. Should you run out of lives you can restart the game from where you left off. However, you’ll have lost not only your score but also all of the upgrades purchased prior to the loss of your last life, which will make further progression within the game far more difficult.

Indeed, so challenging are some later levels (tracks become short and balls begin to move mighty fast) that I found them almost impossible to complete without starting the game over again and trying to earn upgrades more quickly. Even then I often failed—and on the easiest of the game’s three skill settings, no less.

But I’m not going to complain too loudly about the difficulty. As mentioned at the outset, not all games are made for all players. Alawar Entertainment clearly designed Sky Kingdoms for rabid fans who lament the ease with which they complete most games in the genre. Gluttons for marble popping punishment will likely have a blast.

However, one thing I will grumble about with some volume is that the game wasn’t designed with any consideration paid to widescreen displays. Selecting “fullscreen” when using a wide monitor results in the image being stretched across the screen, making both environmental objects and marbles look fat. What’s more, the desktop wallpaper that becomes unlocked as the game progresses is provided only in a low resolution format, which means if you try to set it as your desktop it will either be stretched to fit or simply occupy the center of the screen with black borders all around.

Of course, these are common issues in the casual gaming scene, but they feel particularly shameful in this instance since the game’s art—which consists of simple but subtly beautiful and dynamic fantasy landscapes—is quite appealing.

Still, this is a fairly minor grievance. The take-home message here is that Sky Kingdoms is a rudimentary but competent marble popper with a fiendishly challenging level of difficulty. If you fancy yourself a master of the genre, it’s probably worth a try.

If you liked this game, try Conga Bugs, Luxor 3, and StoneLoops! of Jurassica.