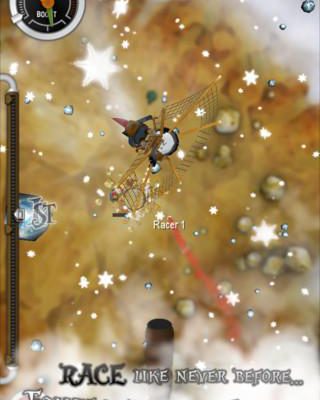 It’s a bird! It’s a plane! It’s…a gnome hurtling towards the earth on a mechanical snowball?

There are two types of people in this world: those who think garden gnomes are creepy, and liars. If you’re not a liar, however, I have some refreshing news for you. Foursaken Media’s Sky Gnomes has taken the little lawn terrors out of the yard, and into the air, where they’re significantly more awesome. And if you are a liar? Shame on you.

Besides a reprieve from dead-eyed garden statues, Sky Gnomes is a novel take on the mobile racer. For starters, your track is a windy free fall down to a landing pad below, making “fast” the default speed on a scale from “woah” to “asteroid.” More interestingly, though, the game follows in the play style of megahits like the With Friends series and Draw Something.

Instead of pairing you online for live gnome-on-gnome action (on second thought, I may want to rephrase that), Foursaken Media uses wi-fi to drop you into micro-tournaments with ten random players. From there, you have the whole day to make your mark with a killer finishing time as you race the ghostly records of your opponents for the chance at trophies, prizes, and steeper competition tomorrow.

Controls take the form of an on-screen yoke stick, which I can’t say I’m crazy about. After a few races it all starts to gel, but at the get-go I found myself wondering if I was a visible pilot or a racer behind the wheel of a first-person snowball. And while they never become “deal-breaker bad,” the occasional record-wrecking failure to register your movement has me wondering why Sky Gnomes doesn’t just have the option of tilt controls. I know I’ve knocked them before, but in a sky diving affair like this, they’d be a perfect way to cut through the learning curve and technical flubs. 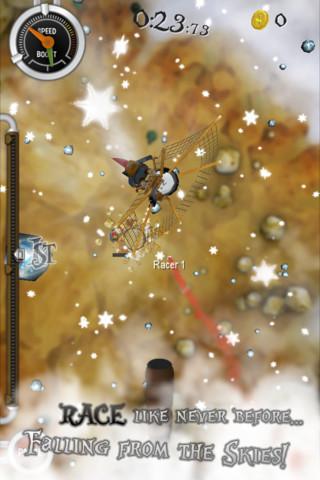 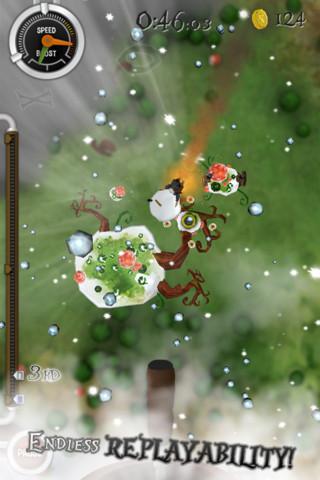 With that said, there’s plenty of fun to be had as your snowball careens down to the ground. With a mixture of speed boosters and hazardous weather, each of the game’s four courses captures what the unrealistic racer fan in me liked so much about Mario Kart – the fun, fickle, frustrating mixture between luck and skill which beckons you to master it.

Continuing the trend of mobile micro-missions, Foursaken also challenges players to complete a number of expert-level tricks on their way to solid ground. Whether that means scraping in under 1:45 or avoiding all coins, perfectionists will be pushing themselves to carve the perfect piece of sky. It’s a pretty clever way to offer training without shoving it in your face.

Unfortunately, a lot of the challenges tie themselves closely to the game’s stable of upgrades and power-ups. On one hand you might think this is great – an excuse to streamline your ship and give it new features. Yet with every new tweak and level costing more than a bit of coins and “spare parts,” the choice quickly becomes: grind it out, or pay your way forward. Here, Sky Gnomes seems to put a little too much faith in the fun factor of its four highly similar courses (there’s only so many minute-long vertical drops I can stand!). 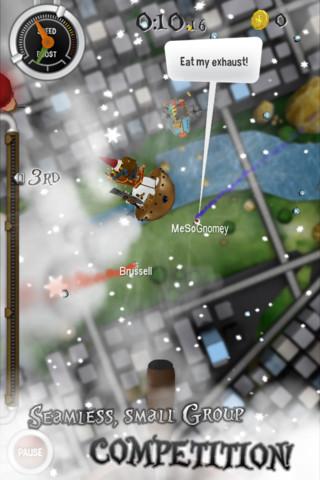 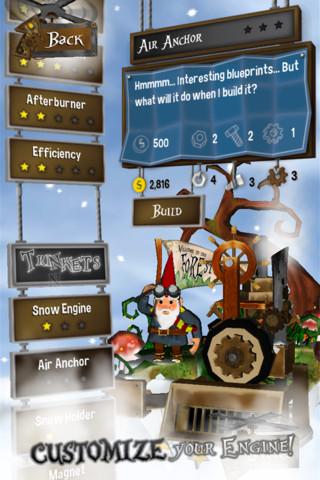 The same problem rears its head during multiplayer, where a more sophisticated pairing system would go a long way towards balanced match-ups. As it stands, the frustration of seeing a player beat your time by over twenty seconds can only be cured by a day full of repetition, or a hand full of cash… not exactly something that lends itself to an on-the-go experience.

At its best, however, Sky Gnomes still has an uncanny way of scratching the racer’s itch and keeping you invested. The masterstroke of asynchronous play ties together the fast-paced mini matches into a full day gauntlet, calling you back to check your place, practice up, and reign supreme. As time goes on, things like a spare part recycler, more tracks, and nuanced pairings would go a long way; but with this trend towards daily developer involvement, I wouldn’t count any of it out.

It’s not a perfectly smooth ride, and just like its thrill-seeking stars, Sky Gnomes misses the target now and again. But at 0.99, with a whole lot of ambition, I’d certainly recommend taking the plunge.