Home / Reviews / Sky: Children of the Light Review: An Auditory and Visual Masterpiece That We’re Blessed to Have on Mobile 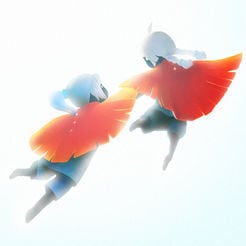 Genuinely heartwarming interactions with other players

It took us less than two minutes to realise that Sky: Children of the Light was something special. After an obtuse cutscene about something bad happening to a bunch of stars we got our first taste of the game in action, and it’s no exaggeration to claim that this is without a shadow of a doubt the finest looking mobile game to date.

Anyone who claims that video games aren’t art will have to seriously rethink their values after experiencing Sky. The world, character design, and animation work is almost as breathtaking as Keanu Reeves, with its billowing clouds, soft glow of candlelight, and rolling green hills.

More impressively though, the gameplay actually blew us away even more. Moving around and interacting with the stunning world just feels so expressive. We haven’t been this engaged with our surroundings since 2017, when we first got a taste of Breath of the Wild. That’s insane when you consider that Sky only has two buttons.

Sky: Children of the Light is Almost as Breathtaking as Keanu Reeves

There are loads of hidden mechanics though, that you’ll only discover by experimenting. You can repeatedly tap jump to skip around the world at greater pace, while jumping and landing on a slope will see you slide down it like a professional skier. Undoubtedly, there are a bunch more hidden mechanics that we’re yet to discover.

Exploration and discovery runs to the very core of Sky, and it never fails to reward you for getting stuck into its world. During our first play through we ventured off the beaten path and found a cave, inside of which was a spirit that gave us a new expression, which is an emote your character can use to engage with other players.

Much like with thatgamecompany’s previous masterpiece, Journey, engaging with other players in meaningful ways is another pillar of this experience, and there are so many ways in which to do so. You’ll see them running around the world and you can use expressions to communicate with each other, leave messages for each other to read, and light each other’s candles to become friends.

But the best experiences are when the two pillars of Sky combine. For example, we stumbled upon a hidden temple earlier that had a door that you can only open with the help of another player. With a simple tap of our character, we called for help and another player swiftly turned up. We opened the door and ventured inside of the temple to find a chamber that required four others to help us light a series of candles at the same time to progress.

We both called in more players and proceeded to explain to them how to solve the puzzle – all without using any form of text or voice whatsoever. Thanks to the use of expressions and simply tapping on your player to call another over, we managed to communicate that we should all light the candles at once.

By doing so, we reached a secret area that absolutely showered us with the game’s sole in-game currency, candles. We were all so fully of joy that we stood around using our most celebratory expressions before gathering all of the loot and getting back on with the game.

Collecting candles allows you to unlock new expressions, spells, and hearts – the latter of which you can spend on cosmetic outfits. As a free to play game, you can purchase candles using real money, but you don’t have to provided you’re willing to dig deep and explore.

So far, we haven’t found this system limiting at all, and if anything it just encourages us to explore even more. So far, the rewards for doing so have been enormous, both in terms of in-game currency, and that warm and fuzzy feeling you only get from interacting with other humans.

We could gush forever about how much we absolutely love Sky, but we’re going to bring our review to a close here. Ultimately, it’s a game best experienced for yourself, and we recommend it to literally every single person who owns an iOS device. Sky is a breathtaking, heartwarming, and incredibly rewarding experience.