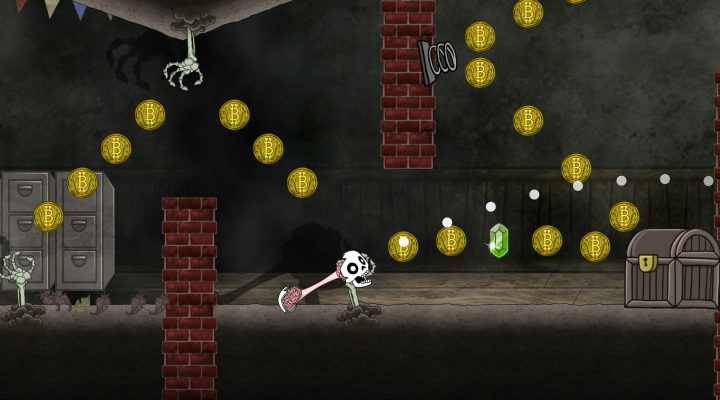 Quirky and bizarre world where eating brains is just part of the job.

Overpowered enemy A.I. and no period of invincibility often results in unavoidable deaths.

Would like more direct and frequent integration of the world's bizarre lore.

Skullduggery! is a charmingly bizarre, fast-paced physics action platformer that takes place in an underworld full of literally dead deadbeats. The skeleton inhabitants of this payment purgatory have decided they can take it with them and amassed hoards of wealth without coughing up a penny in afterlife taxes. Your job, as a disembodied skull tax collector extraordinaire, is to recover their unpaid assets on behalf of the Infernal Revenue Service by any means necessary.

Those means usually involve ricocheting around their hideouts and snatching the loot before your dearly departed marks become aware of your presence. Despite being nothing more than a skull, you have a surprisingly effective method of movement: stretching your brain out behind you and releasing it like a slingshot. As with any good slingshottery, the distance and angle at which you pull back will determine how far and where your face is flung. 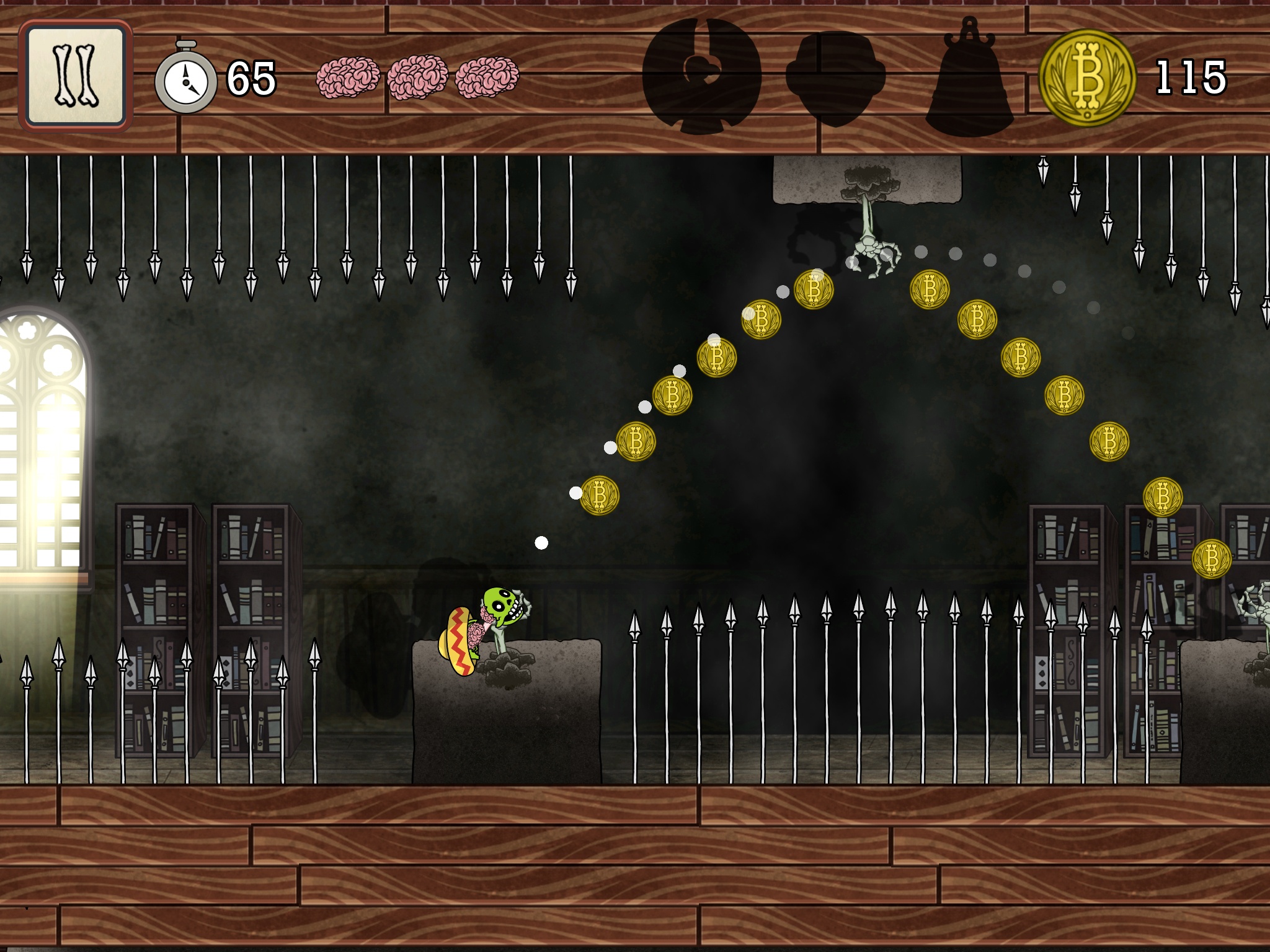 While there’s been no shortage of arched projectile gameplay since the release of Angry Birds, Skullduggery! alters the formula by making this action completely freeform. You can pull back and reshoot at any time, changing direction mid-flight or even staying afloat indefinitely. Since you’ll be using this ability to maneuver around multi-room stages while avoiding hazards, head-butting enemies, and sneaking through narrow passageways, there is also a bullet time-esque slowdown that occurs when you pull back and hold your brain before release. This dramatically slows everything on screen including yourself, allowing you to easily readjust your trajectory or aim more precisely.

Despite this slingshotting being the only action available to you, props and obstacles scattered about the stages provide significant variation on how your head will get around. Bouncy springs catapult you forward, bony skeleton fingers grab and stop you in mid-air, sticky green ooze provides an easy way to roll along ceilings and walls. Flinging your skull through a lantern sets it aflame, allowing you to burn boxes or ropes. Homing torpedoes can be led to destroy path-blocking brick walls. Trash cans and other buckets provide skull-sized hiding places to circumvent dangers. These are only a fraction of the many interactive objects that come into play in Skullduggery!, whose prop population is surpassed only by its skeleton swindlers.

Each stage sends you into the strongholds of these tax-evading con skeletons, from the back-alley dens of long-dead mobsters to the sunken pyramids of longer-dead pharaohs. There are currently three different worlds/settings with eight stages apiece, with a fourth area already planned and promised in a future update. In each locale, you’ll encounter two different types of stages: the first is exploration-heavy and untimed (although every stage does feature a timer for challenge purposes). These levels vary in their organization and contain a number of rooms that can be traversed at your own pace. There are often secret corridors to uncover and you’ll have to solve puzzles and seek out hidden areas to snag all the possible loot.

The other type of stage is more frantic, with the threat of an auto-scrolling wall of (re)death always at your back. Each of these is arranged into three floors that are fairly linear: the challenge of these stages is evading hazards quickly before the wall catches up to and crushes you. A slight variation on the scrolling wall stages comes in the boss levels at the end of each world: these have the same format, but instead of an ever-looming wall, an angry loot-hoarder is chasing you and must be disposed of. 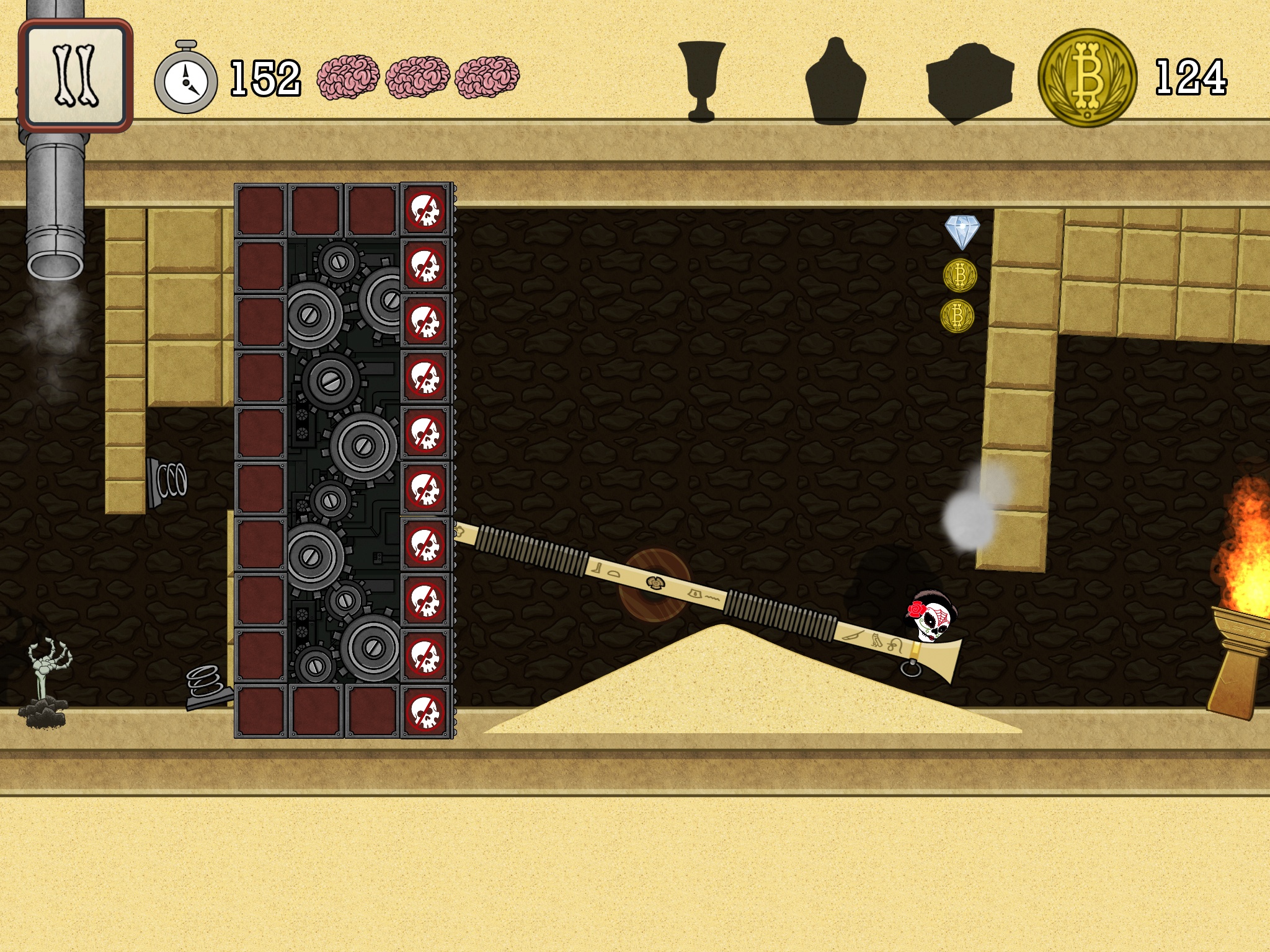 Simply making it to the end of a level alive will allow you to move forward, but every stage also contains five challenges for additional score-keeping and replay value. Two of these are always the same: collect X number of coins and collect all three “assets”—valuables like paintings or golden Tommy Guns—hidden in treasure chests throughout the stage. The other three challenges range from completing the level in a set time to killing a certain number of enemies and devouring their brains. These challenges also unlock additional skull protagonists you can use besides “Doug,” as well as different stages for the local multiplayer.

While we spent the majority of our time with Skullduggery!’s single-player campaign, multiplayer offers a quick-play distraction in the form of same-device head-to-head races where two skulls vie for the same swag. Players each control one half of the screen to fling their character around, aiming to get more coins and items than their opponent. Strategies vary since you can knock the other character out of the way like a bocce ball or into coin-sucking hazards, creating the potential for deviously heated short-burst competition. 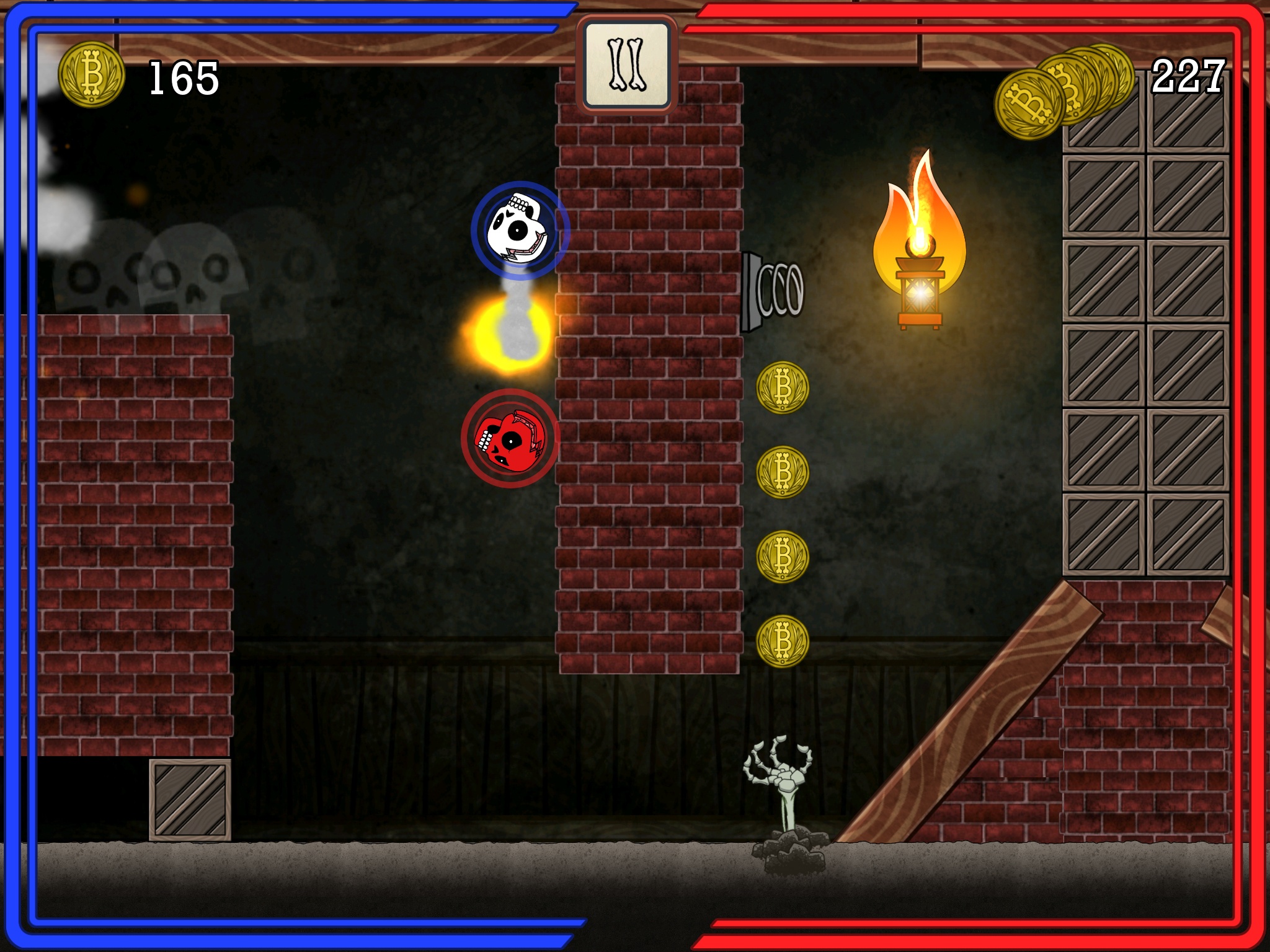 Most of Skullduggery! is designed with the player’s enjoyment in mind and it succeeds at almost every turn, save a few snags. Sections of single-player levels are separated by pipes which act as checkpoints: if you die and restart, you’ll rarely have to go back far. However, this isn’t true for boss levels, which have no checkpoints and force a total replay of the entire stage. These are also, unsurprisingly, the hardest levels in the game, which means you may end up seeing a lot of them over and over. Enemy A.I., coupled with your skull’s lack of invincibility after taking damage, often combine to create instant-death even if you have full three-brain health. Mobster skeletons are able to shoot at you instantaneously, leaving no room for escape or retaliation if you are spotted in a compromising position.

Additionally, for a title built on such a quirky and wild theme, there’s a noticeable lack of exposition within the game itself. The in-app instruction manual presents exactly the kind of charming backstory you’d expect—complete with an adorably murderous narwhal—but it feels very detached from the experience. If you don’t seek this out, you’ll be thrown into the action without even a word about why you’re a disembodied skull collecting coins. Even short blurbs for the unlockable characters would have added some welcome pop to a game that is oozing with personality but not much plot. 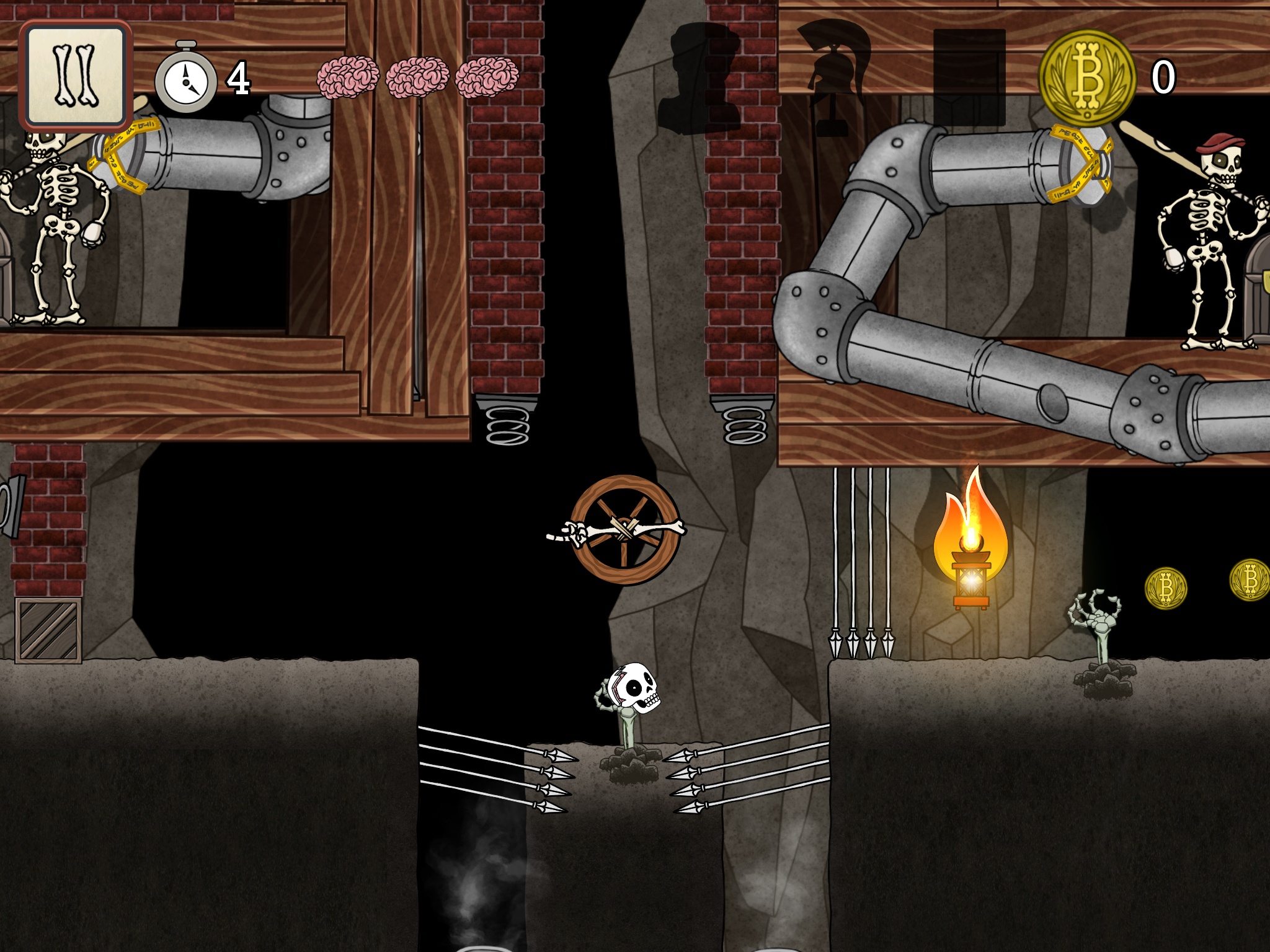 These are fairly minor complaints and nice-to-haves in an otherwise solid and undeniably engaging game. Skullduggery! has managed to implement unbelievably simple touch controls in a varied and intricate world, creating a wide range of action and challenges that provide rapid-fire, brain-bouncing fun.