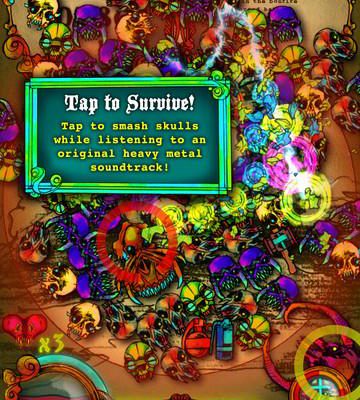 If Judas Priest made a match-3 game, it would be Skull Smasher

Taking an unconventional approach to match-3, Skull Smasher ditches the tightly organized grid formation and replaces it with a willy nilly assembly of skulls. These skulls comes in waves, forming an ever-tightening circle as they approach from the outside and quickly move towards the center, as if some magnetic force were drawing them inwards. As you make matches of three or more skulls and they pop out of existence, the ones further out will draw in even closer.

Because of the messy nature of skulls simply strewn about, players can’t always predict how the pieces will react once a chain of skulls is removed. When playing a typical match-3 on a grid, it’s easy to think a few moves ahead; “if I remove this line of blue gems, than that red one will fall into place.” Such forward thinking is difficult here, making Skull Smasher more of a tapping frenzy than a game of forethought and planning.

But that’s not necessarily a bad thing. In case you hadn’t gathered by now, this is a match-3 that’s much closer to Collapse than it is Bejeweled – and games like Collapse are all about frenzy. By removing the grid and replacing it with a magnetic middle of sorts, Skull Smasher has created a unique variation where the movement of pieces is dependent on physics. It’s a neat twist that makes an old formula feel new again.

With Spinal Tap like determination, the developers at Gilded Skull Games have turned their love all things heavy metal up to 11. When it comes to presentation, the influence the musical genre has had on Skull Smasher comes through loud and clear. The soundtrack boasts an original score that I’d be just as likely to believe is some lost metal masterpiece from 1980. The visuals look like they belong on the cover of whatever album that music came from. And the skulls? If half of those weren’t tattoos on the arms of hard rock fans in ’82, I’ll eat my hat. The game looks good, sounds good, and plays good. What’s not to love? 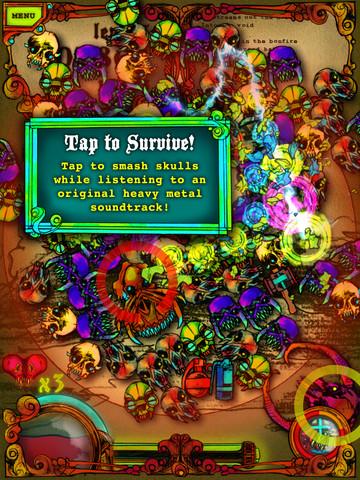 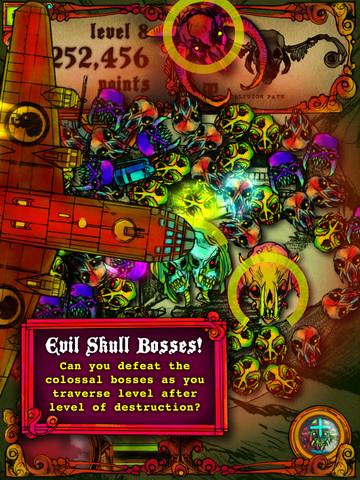 Well… a few things. While the rock may be hard, the challenge is surprisingly soft. There are three different difficulty options when starting a new game, but regardless of which you pick, you should have no problem whiling away 15 or 20 minutes in a single sitting. For a game of this nature, that’s far too long for the average player to survive. When something is too easy it can get dull after a while, regardless of how fun the underlying gameplay might be.

This problem is compounded by the fact that you’re given three lives, so even if you do die early by some fluke, you’re given two more chances to get it right. And more frustrating than that is knowing how challenging the game can get, but that it doesn’t until after too long a period of play. Level 8 on “Nightmare” difficulty is where I really started to feel like Skull Smasher had legs, but by the time I’d gotten that far, nearly 15 minutes had ticked by. That’s the level of challenge we should have seen at the very beginning of Nightmare.

And while the game offers plenty of cool twists like unique power-ups, enemies to destroy, and a deteriorating health bar that only suffers once the screen is full, there were a few touches that really didn’t work as well as they could have. For example – you can get a score multiplier by matching 3 glowing skulls of the same type in the same chain, but the only way to get glowing skulls is by pure dumb luck. And since this is a game driven by high score, basing the multipliers more on luck than skill can really take the wind out of your sails.

Still, while it sounds like I’m harping on Skull Smasher‘s weaknesses, there’s no denying that its strengths certainly win the day. There’s plenty of fun to be had, and with the endless stream of skulls and rock music, you can’t help but get an adrenaline rush every time you play. Besides – who doesn’t love a power-up that simulates a bombing straight out of World War II?