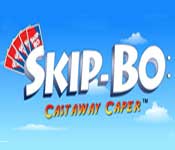 On the tail of UNO Undercover comes SKIP-BO Castaway Caper, a casual game remake of another of Mattel’s card games. If you haven’t heard of it, Skip-BO is similar to UNO, but while UNO is often compared to Crazy 8s, Skip-BO more closely resembles Spit, or the traditional card game sometimes known as Cat and Mouse or Spite and Malice.

SKIP-BO Castaway Caper takes place on an isolated tropical island, as you’ve probably guessed by the name. The story gives a theme and backdrop to the card game, but doesn’t deeply affect the gameplay, so don’t expect too much detail. The idea is that your arrival on this island has angered the Great Volcano. To appease it, you’ll need to win 10 tribal challenges. During each challenge, you’ll have to play 4 matches of Skip-Bo against the natives. You must beat every game to win.

To start, you get to design your avatar by selecting eye, face, nose, and mouth shape, in addition to changing the skin, hair, outfit, and background colors. Once you’ve got your avatar ready, you’ll need to play through the short in-game tutorial. Successfully completing it unlocks Classic, Speed, and Team Skip-Bo modes in the main menu.

The rules are just like the card game, so if you’ve played before you should be able to jump right in. If not, the rules may sound complicated, but they actually are pretty simple once you start playing. It’s easiest to learn as you go along.

Each player will be dealt 30 “stock pile” cards. The object is to shed all of your stock pile cards before the other players. In addition to the stock pile, you’ll also be dealt 5 additional cards, which make up your “hand.”

In the center of the table are the four “building” piles. Players take turns adding cards from their hand or stock or discard piles to these building piles, starting with cards numbered “1” and building in numerical order to cards numbered “12.” After a pile has reached 12, it will be cleared off the table, and you may start a new pile with 1 again.

Cards marked “skip-bo” are wild, so they can have any value you choose. Unlike UNO, the color of the cards doesn’t matter, so you can just ignore them.

You may keep shedding cards until you run out of opportunities. To end your turn, you must select a card to discard. This is added to one of your four “discard” piles. As mentioned above, these cards may be played in future.

At the beginning of each turn, your hand is replenished, so you’ll always have 5 cards available. After winning each tribal challenge, you’ll be given the chance to unlock a new deck by playing a mini-game. You must keep replaying these mini-games until you win, so there isn’t much choice in the matter, but they are pretty easy. All of these games include memory tasks, like memorizing the placement of specific cards, timed card-matching, and finding a card under shuffled coconuts.

If you’re wondering about the other game play modes, the rules are mostly the same as above. Classic mode allows you to play rounds against 3 opponents (you can select the difficulty level), and Speed mode allows you to play short 10-card rounds if you only have a few minutes to spare. Team Skip-Bo is slightly different, as you are teamed up with a computer player, and you play against two other computer players. You get to use your teammate’s discard and stock piles, and both teammates must clear their stock piles to win.

On the upside, the graphics are attractive. It’s a fairly stock-standard sort of game. The tutorial is simple and clear, and it’s an easy card game to learn. There’s no time pressure, and only a limited selection of strategies to employ, so it’s relaxing and not too complicated.

On the downside, there isn’t much to do aside from playing Skip-BO over and over. While that’s the point, the card game itself might not be strong enough to attract all players. It’s the sort of game that’s fun to play with friends, but maybe not as fun to play by yourself. It would be very cool to see a version that offered an online option, or the chance to play against friends and family (especially in team mode).

Hardcore card gamers will probably find that the simplicity of the rules makes the gameplay feel too slow and repetitive over time. If you like the card game Skip-BO, and want a game that allows you to play unlimited rounds, then SKIP-BO Castaway Caper is a good pick. However, if you’re usually neutral about SKIP-BO or UNO games in general, there might not be much here to interest you for longer than the trial.