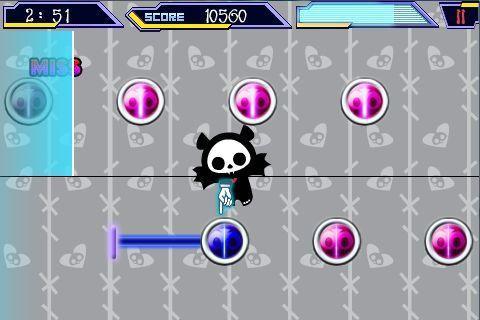 Finally, a rhythm game for your little sister.

For the past few years, young ladies around the world have been enamored with the goth chic stylings of Skelanimals. A line of clothing, toys, and accessories, Skelanimals features adorable little animals in all their gloomy skeletal goodness. Now those skeletons are looking to dance.

Skelanimals Dance Party is a new music/rhythm game featuring the aforementioned undead cuties. Featuring may actually be too strong a word – the animals do little more than dance in the background. Like most rhythm games, the bulk of the gameplay here is about tapping in time to the music. Unlike other games, though, Skelanimals makes an effort to try something different than the usual “falling notes” formula employed by so many games out there. Their new approach meets with mixed results.

The screen in Skelanimals is divided in half, and as a song begins a note line moves across the top half of the screen waiting for you to tap it at required times. You’ll know when to tap as the line will cross a circle when a tap is required. Once the line reaches the other end of the screen, it then begins going in the opposite direction on the lower half of the screen – almost as if it’s looped around the edge – and the process begins again.

It’s great to see a game try something new, but once you get used to it the game doesn’t feel much different than the competition. If anything, we found this formula to be far easier to master than many of the other rhythm games out there. It works incredibly well from a technical perspective, but as a gamer, it became much too dull by the second or third song.

Gameplay aside, a rhythm game lives and dies by its music selection. The iTunes description for Skelanimals Dance Party showed promise, suggesting that players would “tap and slide along to songs performed by some of today’s up-and-coming bands.” The prospect of discovering up-and-coming talents is a big draw in music games, and in certain releases like Music Pets it absolutely pays off. Skelanimals Dance Party isn’t so lucky. 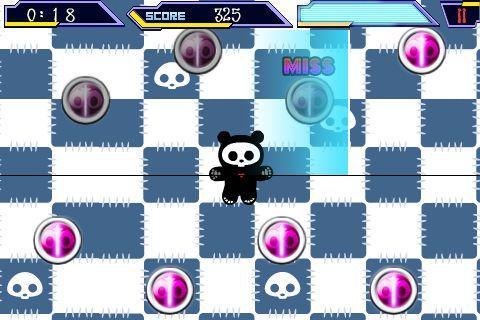 Every one of the 10 included tracks seems to have been pulled straight from the music collection of an 11 year old girl. It’s the sort of unrecognizable, uninspired tweeny bop that makes the skin of most music lovers crawl. Is it a good fit for the target audience of the Skelanimals brand? Probably. But when you’re trying to market a music game, you want to appeal to as wide an audience as possible. At best, Skelanimals Dance Party will appeal to your little sister.

Still, if you are into the factory produced tween pop that clutters up the jukebox, the game offers up handy links to both the iTunes page for each song and the MySpace page for the artist. Little touches like this are a must for music fans looking to take an experience beyond the game, so it’s nice to see them included. Like everything here, though, these perks aren’t without their flaws. In the case of iTunes links, most of these songs don’t appear to be available on iTunes outside of the US, meaning the rest of the world will simply be taken to a dead link.

The gameplay mechanics may be unique, but it’s too simple an offering to really hold our interest for long. The music selection, too, lacks the variety needed to appeal to a wide audience. If you happen to be a tween girl who listens to FM radio despite owning an iPod Touch, there’s little doubt in my mind that you’ll dig what Skelanimals Dance Party has to offer. For everyone else out there, we recommend you stick with the countless other music games on the market.