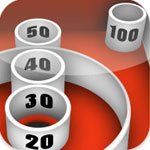 You know you're addicted to a game when you wake up in the morning and log in to find out where you stand against all of the other iPhone Skee-Ball players out there even before you brush your teeth. That's, me. I admit it. I've definitely been bitten by the Skee-Ball bug (and don't even get me started on how much time I spend managing my Farmville farm). Sometimes you find a game like Skee-Ball that is so simple yet so much fun you want to keep playing it over and over again, because you never know when you're going to get that magic combination of great shots that result in an all time high score.

The whole experience of playing Skee-Ball has brought me back to my youth. Back before there was a Nintendo in every home or a iPhone in every pocket, my friends and I would find our fix for playing games at the local arcade. We'd waste hours (and quarters) trying to beat each other in pinball, pop-a-shot basketball and Skee-Ball. And of course, we would all crowd around the counter with our fists full of tickets, ogling the plastic vampire teeth or the troll dolls, and trying to bargain with the man behind the counter for our heart's desire.

Ah, those were the days. If only there were an iPhone game that brought back all of those elements of my youth. Well, there is! Thanks to the Nvidia HysX engine, Skee-Ball for iPhone faithfully re-creates the arcade experience of rolling wooden balls up a wooden ramp to try and get that elusive high score (and bag a batch of tickets). The sound effects of the balls rolling down the chute and bouncing off of the various hoops augment the fun. There are even two ways to shoot the little ball. You can “flick” the iPhone (while holding down your thumb) and use gravity to shoot the ball. Or you can “swipe” your finger in an upward motion toward the scoring area. I prefer swiping to flicking because I can be much more accurate. Even so, the game is very sensitive to very slight variations in your finger's movements, which makes it very realistic. Just like the real game, you can get into a groove and figure out exactly how fast and in what direction to swipe your finger, but it is nearly impossible to do the exact same motion every time – which results in a variety of scores from the dreaded zero to 150 points.

Building on the arcade experience, Skee-Ball also adds cool bonuses that enable you to rack up quite a high score (my record is 1500 points in one game). When you see a flashing hoop, you aim your next shot in the direction. If you make it in the hoop before the flash goes away, then you'll get 2X, 3X, 4X or 5X points (depending on the bonus setting at the beginning of the game). Being smart about your bonus shots can enable you to get some really high scores (and rack up those tickets!). Another extra feature that has me hooked is the constantly updating worldwide high scores (based on total tickets won). I have earned hundreds of tickets, but I am still only in the top 4,000 of all players in the world. (Even though I'm addicted, I guess there are some players who have more time than I do.)

Speaking of tickets, I was thoroughly amused at the 'redeem' and 'loot' sections of the game. Just like those counters at your local arcade, the 'redeem' section of Skee-Ball features old time goodies like plastic vampire teeth, a fake moustache, a teddy bear, jacks and balls, a robot, and much, much more. All of that 'stuff' you just had to have as a kid because it represented your skill as a Skee-Ball player.

This game is near perfect. It is hard to find anything to complain about, but I will say that I was a tiny bit disappointed that it had only one game mode. You play the same Skee-Ball every time. However, for fans, that isn't really a problem. It is the whole point of buying the game in the first place! I mean, after all, in the arcade when I used to play, Skee-Ball was the same every time, and I didn't mind. I just played and played and played until mom said it was time to come home. So forget the super high-tech stuff for a little while and lose yourself in some good, old-fashioned fun with Skee-Ball for iPhone.