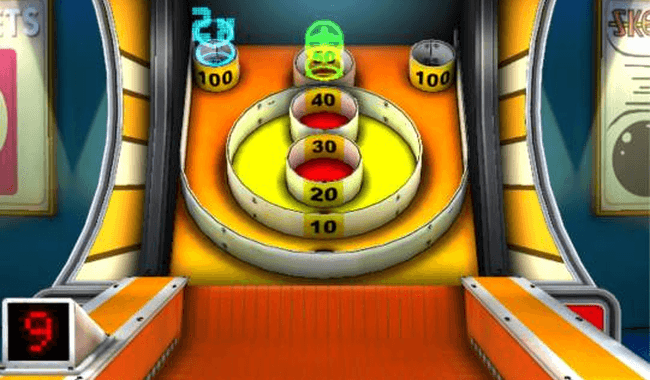 The death of arcades threw up a cloud of fallout that subsequently killed almost everything even associated with the neon-lit caves of old. Arcade cabinets weren’t the only machines that dissolved into irrelevance: classics like Whack-a-Mole and skee-ball faded away with them. There are still a few ways to get your skee ball fix, however. You can hang around a Chuck E Cheese and push ahead of the kids lined up in front of you (not recommended), or you can download Skee-Ball Arcade by Scopely.

Other skee ball apps have come and gone from the App Store, but Skee-Ball Arcade is the first officially licensed game. It honors its license, too; this is the most authentic skee ball experience you’re going to find outside of some bowling alley’s decrepit video game corner.

Playing skee-ball is a bit like playing on a small, elevated bowling course (if you’re Canadian, picture five-pin bowling conducted on a miniaturized lane full of speed bumps and holes). You’re allotted a certain number of small balls, which you roll up and over a series of rubber barriers. Behind each barrier is a hole that corresponds to a score. If your ball goes into a hole, you’re rewarded with the marked number of points. Generally, the smaller and further away a barrier / hole combo is, the more points it’s worth. When your game is over, you receive a string of tickets you can exchange at a counter for a comb or mustache wax.

Skee-Ball Arcade plays much like traditional skee ball, though there are some nifty digital additions. There are, for instance, point multipliers galore. Lanes light up with numbers indicating your score will be doubled or tripled if you manage to roll along the multiplier and then into a hole. So if you roll true along a 3X multiplier lane, even a lowly 20 points can become a respectable 60 points. The holes themselves are also marked to award bonuses. Some award free balls, while others grant shots at cool bonus rounds that can help close a score gap if you’re doing miserably against an opponent.

Get used to the word “opponent,” because Skee-Ball Arcade doesn’t offer much of a single-player experience. You can play against Facebook friends or random folks, but outside of a tournament feature that lets you do your best against the champions’ high scores, you don’t get much of a chance to relive the quiet days when you’d come to the arcade alone (and possibly weep). More importantly, it’d be nice to have a chance to improve your skills before pitting yourself against someone who’s able to score 6000 points in a single turn.

Practice is important, because the controls in Skee-Ball Arcade take a little getting used to. You can manipulate the direction of your shot by tiling your device to the side, but it takes a while to get the hang of, especially since there’s no calibration option. The weight of a smartphone doesn’t quite replace the weight of a wooden ball in your hand, but Skee-Ball Arcade still delivers a fast-paced and highly competitive skee-ball experience, complete with lots of convincing sound effects. It’s so engaging you’ll never want to go home. Good thing you can play from home.