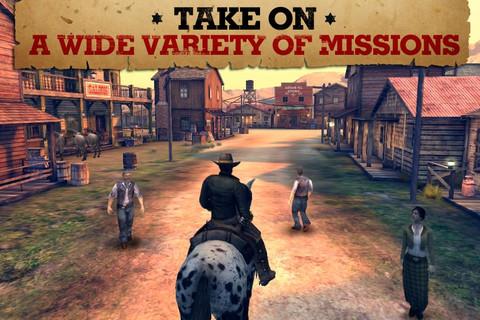 When Six-Guns was first revealed, it looked amazing. Gameloft promised an experience like Rockstar’s Wild West opus, Red Dead Redemption, except on iOS, complete with an open world to explore, crazy gunfights, and top-notch production values. In some ways Gameloft makes good on this pledge, but Six-Guns also misses the mark in a lot of places where it counts.

The game is an action-adventure set in various territories of the Old West. You control a mysterious gunfighter who roams around the visually stunning desert, rescuing innocents and vanquishing monsters simply because he doesn’t seem to have anything better to do. Seriously, he doesn’t.

The biggest problem with Six-Guns is its story — namely that there isn’t one. At all. There is literally zero introduction to Buck Crosshaw (side note: I had no idea he even had a name until I looked at the game’s page in the App Store). Gameloft promises an epic tale about a good man who becomes an outlaw, has to fake his own death, and then fight an ancient evil that’s terrorizing the countryside. We get none of this. Nothing. Nada. Zilch.

This proves to be a lot more problematic than you might expect. The missions suffer a lot from the lack of story. There’s no narrative progression, and it’s utterly bizarre to go from, say, treating a man who’s suffered from a rattlesnake bite to cleansing an abandoned fort of witches and “nightwalkers” (which seem like a cross between zombies and vampires).

It doesn’t take long for missions to get repetitive, either. Opening up the game map reveals different quests peppered around the local countryside, which you can select and then fast-travel to (though you can’t fast travel to other points on the map). They’re never terribly exciting, either: There’s no build-up, no excitement, and they’re not all that challenging so long as you keep buying new gear. There are only a few different quest types — mainly variations of horseback races, general shoot-outs, and dungeon crawls — and they start to get old pretty quickly. Each mission plays nearly the same as any other of its type, though the difficulty increases as the game progresses, thanks to your enemies’ improving equipment and mounts.

In order to keep up with your opponents’ upgrades, you’ll need to keep buying new stuff via the off-putting freemium content. You earn in-game gold and experience by completing the various missions, but you constantly need to spend the former in order to survive against your constantly-improving opponents. Your guns don’t do a lot of damage for long (though the enemy AI stays pretty stupid all the way through), your current horse’s speed won’t be enough to keep winning races, and your initial backpack won’t hold all that much gear. You’ll constantly need to keep spending money if you want to maintain your edge, and said upgrades will burn through your cash reserves faster than you’d believe. Additionally, you’ll constantly receive prompts to buy things like fast ammo reloads and health potions and they don’t go away for quite some time. 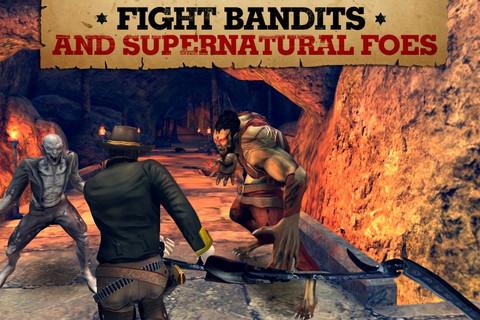 What’s surprisingly disappointing about Six-Guns, though, is the fact that its production values and mechanics aren’t always up to snuff. This is a little surprising, since we’re talking about a Gameloft title here. While the graphics do look great, especially on the iPad, texture pop-up is a pretty regular occurrence that takes away from the overall experience.

The controls, meanwhile, just don’t always work like they should (even though their placement and ease-of-use meets the usual Gameloft expectations): there were a couple of times when Buck stopped moving for no discernable reason in the middle of a horse race and wouldn’t respond to commands until the event was restarted.

Six-Guns manages to snatch mediocrity out of the jaws of greatness. It’s by no means a terrible title, but it is remarkably shallow, unpolished, and repetitive. That’s heartbreaking, honestly, because no one should ever have to use that last sentence when describing a game about cowboys fighting vampires.