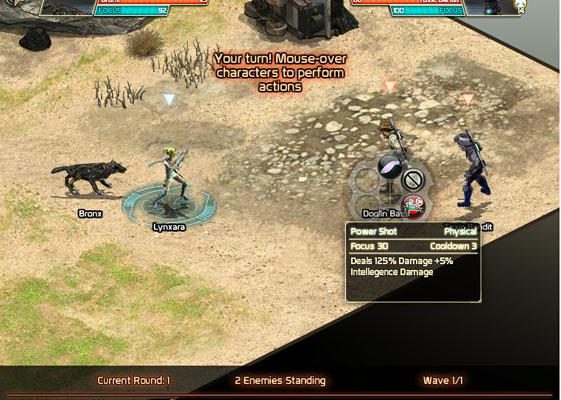 Six Gun Galaxy reinvents role-playing on Facebook, with a little city-building on the side

Most role-playing games on Facebook are called text RPGs because, while they do feature quests and loot, there’s no real sense of exploring a fictional world. There are no in-game maps or locations to explore on even the most rudimentary level. Six Gun Galaxy‘s role-playing portion is, comparatively, a great leap forward. It introduces area maps to explore and a world map that connects the game’s areas together in a logical, convenient way. You can also invest in building up your own village in Six Gun Galaxy, but this part of the game is less of a leap forward when compared to competitors.

The role-playing portions of Six Gun Galaxy are extraordinary when compared to other Facebook RPGs, though. Six Gun Galaxy, despite the name, is clearly influenced by the recent console and PC Fallout 3, which uses alternate history to transform America into a kitschy post-apocalyptic wasteland that blends Wild West tropes with pure 50s paranoia. Six Gun Galaxy‘s world of isolated frontier towns struggling with supply problems and threats from rabid animals evokes much the same feeling. Even Six Gun Galaxy‘s isometric view has much to do with earlier games in the Fallout series, which featured similar graphics. 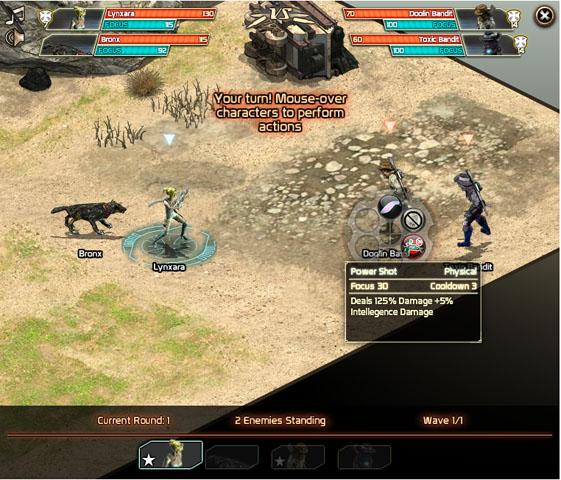 Six Gun Galaxy‘s features descend from the Fallout series, too. You can have up to three characters in your party, only one of which you control directly. The others act as AI-controlled assistants who will take actions when their turn comes up. You can customize your character by spending skill points on traits like attack, hit points, and focus as he or she levels up, in addition to using unlocked skills and applying mods to gain more skills. You can customize your AI companions in a similar way and choose which companions you wish to have in your party. Combat in Six Gun Galaxy is far more satisfying than it is in virtually any other Facebook game.

Your character pursues two goals in the game. One is to simply explore the world, gaining experience by completing quests and fighting enemies. Completing story-based quests can send you to new locations and there are optional quests that the game doesn’t force you to do, but are still interesting. Some optional quests are a bit typical of text RPGs, though, demanding little more of you than spending energy to fill up a meter. You can invest the funds you make through adventuring in building up a village of your own design, which will in turn help generate more revenue that you can spend improving your equipment and attracting more companions. 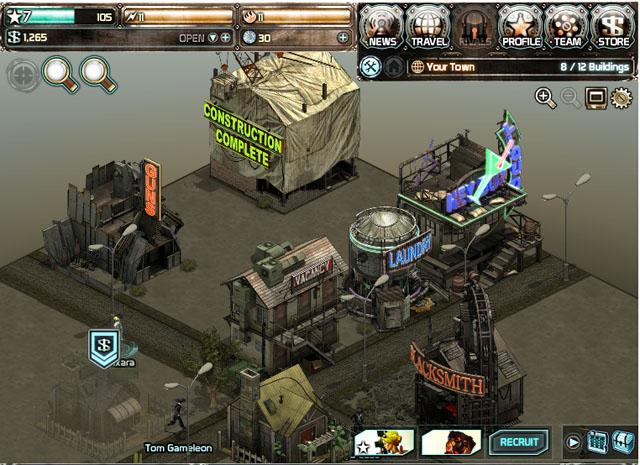 If you go to Six Gun Galaxy wanting to play a city-builder, you’ll probably leave disappointed. The town-building part of the game is far shallower than the RPG portion and can be entirely neglected for long periods of time, if you opt to do enough of the optional quests.

If you’re interested in playing a Facebook RPG that can offer more atmosphere and depth than the basic Mafia Wars clones that have ruled the platform for years, though, Six Gun Galaxy is a perfect fit. It’s a game that suggests RPGs on Facebook may still have a bright future ahead of them.