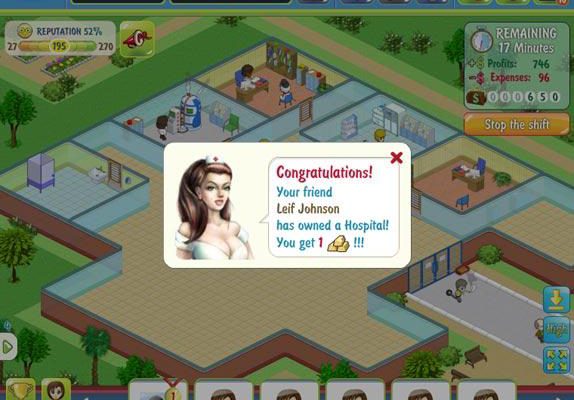 Simply Hospital is fun in spots, but quickly becomes another routine visit to the doctor’s office.

When in doubt, use breasts. That seems to be the logic behind 6 Waves’ Simply Hospital, which starts out with a full screen view of a nurse in a low-cut blouse that unavoidably draws attention to certain extravagant proportions. Clicking refresh sometimes reveals yet another voluptuous attendant with her needle at the ready, and certain other introductory screens suggest that we might be in for a couple of hours of adult-themed entertainment. Antics such as these usually result from a last-ditch effort to hide a game’s flaws with cheap eye candy, but Simply Hospital is actually a surprisingly decent and humorous hospital sim that nevertheless leaves a cold, clinical taste in your mouth at times.

It also dangerously walks the thin line between homage and rip-off. Few people these days remember Electronic Arts’ Theme Hospital (1997), which required you to build a hospital and treat all kinds of silly illnesses (e.g., “Bloaty Head” and “Uncommon Cold”), but Simply Hospital borrows so liberally from the aging sim that it often seems like the same game. With breasts, of course. Theme Hospital’s illnesses then needed to be cured in special rooms corresponding to the diseases, and you needed a diverse staff (including doctors, nurses and handymen) to run the whole show. And there you have Simply Hospital in a nutshell, down to the very layout options for the hospital. 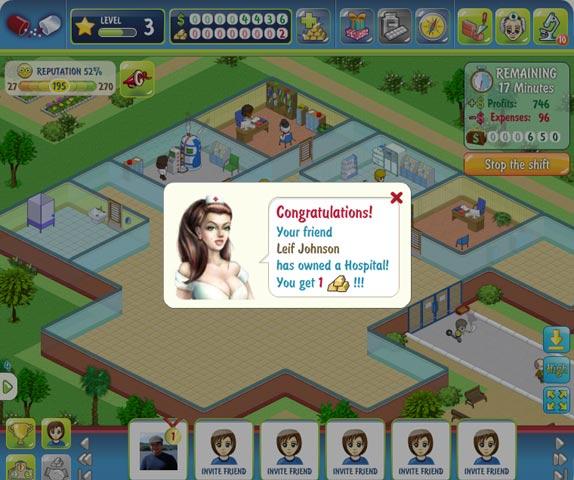 Still, it’s different enough from many current business sims to seem like a breath of fresh air, and several elements are worth attention. For one, instead of starting some form of crop or getting some gizmo to start plugging out meals for your customers, you’re asked to start a work shift for a limited amount of time (dependent on your level). Sick and weary patients trudge in with the same nod to humor that we saw in Theme Hospital, complete with ailments such as Frostbite that turn the afflicted into a snowman. These patients check in with the receptionist and go to an examination room, and once they’ve received a diagnosis, they’re sent to the appropriate recovery room. In our snowman’s case, he would head to the “Steam Therapy Room.” At the end of the shift, you simply click on the shift menu to collect your earnings.

Fortunately for gameplay, it’s rarely that simple. Before you can treat an illness, you must know how to diagnose it, and so you go to your “Research” department and learn how to treat it. This is a timed activity limited to only one research session at a time, and the time it takes to research a particular illness varies according to level and the severity of the illness. Additionally, every ailment requires several research sessions to attain a 100% accuracy rate, and you must make sure you’ve built the specific room for the treatment. Combined with the work-shift mode, this variety of tasks helps Simply Hospital avoid the single-mindedness of simpler games. 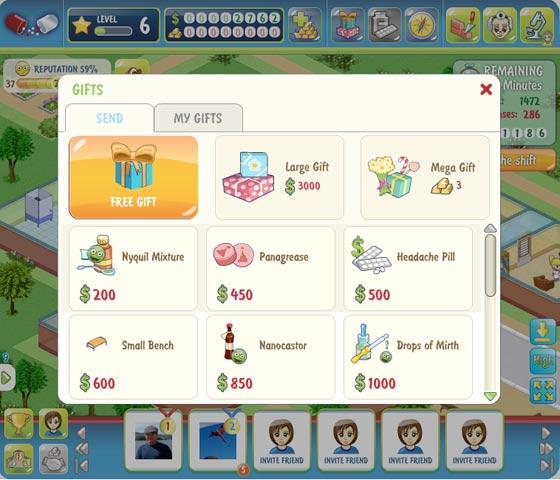 Unfortunately, there’s not much room for customization when it comes to the rooms themselves. Since each hospital is built with the same floorplan with set spots for any type of room, your hospital and those of your friends will basically end up looking the same aside from the actual placement of the rooms themselves and the game’s predictably clinical decorative elements. This is remedied a bit when you expand your hospital in later levels, although it becomes the same issue on a larger scale. The rooms themselves include diagnostic and treatment rooms (in addition to a doctor’s lounge and restrooms), and you’ll need to hire doctors to run them. Fortunately, you can add one of your Facebook friends for jobs like these, but the main benefit (aside from sending gifts) seems to be simply saving you the cost of hiring an in-game doctor. These typically require a hefty hourly wage, so hiring your friends is often the better option.

Lastly, reputation plays a major factor in succeeding at the game. While this can be raised by spending money on advertising, the best way to earn a good reputation is to consistently successfully diagnose and treat your patients and provide them with the standard hospital amenities for visitors, such as waiting benches and vending machines. Additionally, you can also “cheer up” your patients by clicking on them. Decorative items are currently severely limited, however, and you can almost feel the developers trying to come up with things to put in a hospital. Specifically, there are only eleven items available for your hospital (although a few more can be received as gifts), ranging from our simple bench to a slot machine as the only fixture available in the “entertainment” category. I’m fairly certain that there are hospitals in the most remote parts of the earth with more entertainment options than this. 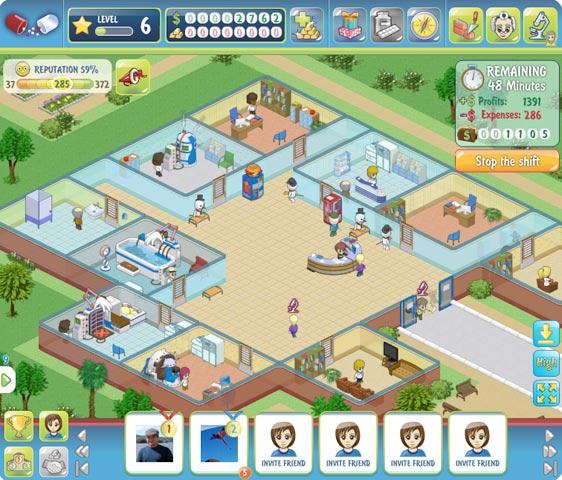 If this sounds complicated, don’t worry: your busty nurse will happily guide you through most of the steps at the beginning. Perhaps she’ll even distract you from the game’s numerous typographical errors along the way (e.g., “expang the hospital”). To be fair, however, Theme Hospital, suffered from many of the same issues, and Red Spell, the developer, has done a good job of improving on some of its faults with key elements of Facebook social games and getting rid of several bugs. In fact, Simply Hospital is perfectly engaging for the first several levels, but it quickly grows repetitive and the intermittent spurts of humor fade away. Perhaps this would have been a better game if your hospital expansions were in wildly different zones, such as a Peace Corps installment far in the wilderness. Perhaps some wild and humorous variety in the decorations would have helped. Perhaps they should have incorporated those sultry nurses into the actual game somehow. At any rate, Simply Hospital is worth a look if you’re seeking a rather unique Facebook game, but don’t expect your interest to last much longer than a bout of the common cold.

Oh, and you might want to look behind you before starting up the game. Our lovely nurse might give certain onlookers the wrong impression.

Mystery of the Earl Review