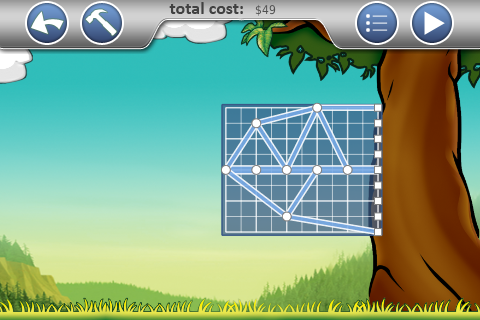 SimplePhysics is a few bricks short of a skyscraper

SimplePhysics is generally true to its name: the object is to build structures that withstand the forces of physics with a simple editor. However, with only a few puzzles, I was left feeling a little empty.

Presented in SimplePhysics are four (five if you count the tutorial) puzzles to complete. Each puzzle is a bit different from the last, but each have the same exact general objective which is to build sound structures that can withstand some sort of force.

Once you have built a strong enough structure and tested it, you can progress to the next level which will be more difficult than the last. The second level has you building a roofing structure that can withstand 50,000 pounds of snow on top. The puzzles can be brain-bending and in my case, even required me to walk away from the game for a while and come back with a fresh mind in order to complete them.

The biggest flaw in SimplePhysics is the lack of puzzles (as stated previously, there are only four.) After about an hour of playing, you will have likely completed most if not all of the puzzles. I understand part of the idea of mobile games is to have simple games that don’t cost very much, but when I can buy Angry Birds or Cut the Rope with seemingly endless amounts of content for the same price, this seems a bit stingy.

Another flaw lies in the difficulty curve. The first tree house level is very easy to complete, but from there the game tends to be excruciatingly difficult. Perhaps a hint system would have helped balance things here, as frustration does not usually translate into fun. 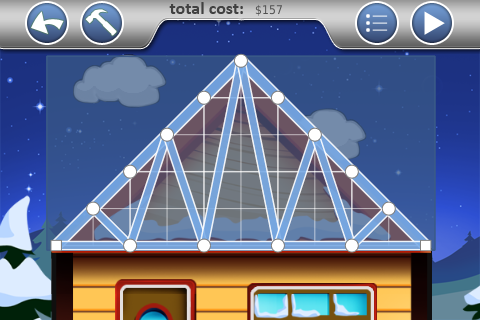 Despite the claim of the game being too short, the game does have some neat features to use, such as being able to send your friends your completed designs, a finger physics test that usually ends in ultimate destruction, and a stress display which shows off the weak points in your design while the simulation is running. Online leaderboards also spice things up a little bit, in that you can constantly compete with friends on who has created the best design to fit the bill.

Overall, SimplePhysics does what it ultimately set out to do, which is to make a physcis simulator that works and is easy to design for. If it weren’t for the paltry amount of puzzles and the crushing difficulty, I would recommend SimplePhysics in a heartbeat. But as it stands, I can only otherwise advise a bit of caution before purchasing.