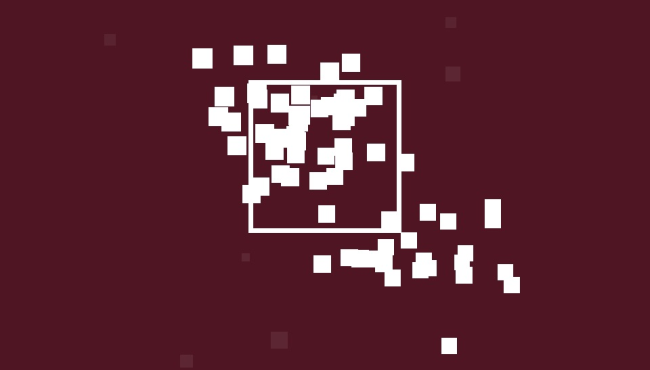 As a tech demo for what can be possible with a slight tilt or two of your iPhone, simian.interfacepushes all the right buttons. It’s unique, stylish, and provides numerous wonderfully satisfying moments that jumble together into a compelling side-order of entrancement.

Now what we could really do with is the full game! See, the problem is that, as hinted at, simian.interface feels like someone started making a massively interesting game, and then sort of got bored of the concept partway through and moved onto something else. Still, simian.interface works great as a mere taster.

This is a game all about technical whimsy and alignment. You’re presented with squares, lines, and other shapes, and you must line them up to either fit inside one another, to overlap perfectly, or to slot into a pretty pattern, all by tilting your iOS device. The controls feel spot-on, and allow you to really focus on the task at hand and immerse yourself in the concept.

And it’s a really neat idea, as it turns out. Although it’s fairly simple 90 percent of the time, there’s still plenty of room for clever rotating, sliding, flipping, color blending, and all other sorts of literal twists on the base concept. There’s no filler here whatsoever – from start to finish I had a smile on my face.

More importantly, it’s massively compelling. I wanted to keep pushing forward to see the next idea and neat trick, and even though I was rarely pushed mentally, my brain still thanked me very much for playing.

simian.interface‘s other main focus is on style. The experience is presented as a series of experiments, as a monkey is rewarded with bananas for each set of trials he manages to pass. From the command-line styled interface to the fast-paced, error-inducing soundtrack, simian.interface is pretty bloody gorgeous.

Now for the “but.” I’m rarely someone who focuses on the length of a game, but in simian.interface, the extreme briefness leads the game to feeling incomplete and unfinished. The first 10 minutes are spent getting to grips with the concepts, and explores some fairly easy puzzles – compelling, but easy. Then the game finally gets going, with some experiments that will have you flicking your iPhone all over the place… and then it ends.

At around 15 minutes in length, simian.interface doesn’t have the space at all to take the concept to maturity. The very last puzzle has you linking ideas together in one long stream, which feels like a great evolution from what you’ve been playing in the 13 minutes that preceded it – but then it just ends, with little more than a list of developer names. 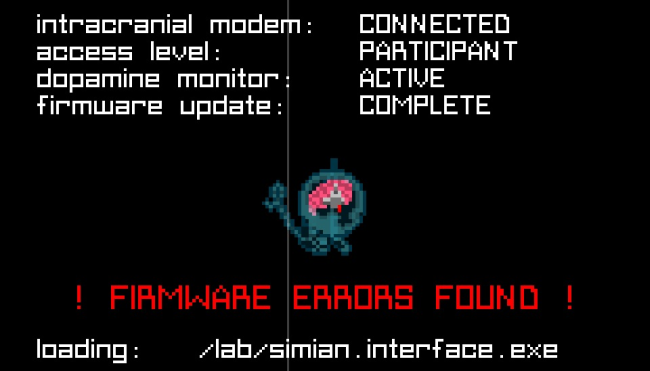 This leaves the feeling that simian.interface is more of a tech demo than an actual full game – the bit a developer might show off in previews for the game, rather than the main course. It’s such a shame, because I definitely wanted to continue onwards and see more. It’s not like there are simply no more ways to expand on the concept either – I can think of plenty off the top of my head, and no doubt the developer could have gone further.

Whether it’s the case that the Vested Interest team wanted to see player reactions to the game first before building a larger, more expansive model remains to be seen. In its current state, simian.interface is clever and well worth experiencing, but far too brief for its own good.

My Fear and I Review