Real mayors stay up city planning until 4am too.

Everyone remembers their first SimCity.  If you’re a young whipper-snapper, you probably have fond memories of SimCity 4.  20-somethings spent countless hours of their youth on SimCity 3000, and most friends my age discovered the original SimCity when it hit the Super Nintendo in 1991.  But my first memory of SimCity?  That dates all the way back to 1989.

It was fall, I was nerdy, and I needed a new video game to help me while away the winter. I paid a visit to my local Babbage’s and saw  an utterly fascinating box on the shelf.  I bought it, brought it home, and within minutes of installing it I was hooked.  That was me at 8 years old.

I’m now 32, and since that time I’ve put more hours into SimCity games than I’d care to admit.  That’s probably why I approached the latest installment in the franchise with a healthy mix of skepticism and excitement.  Did we really need another iteration of SimCity?  And was it really going to hook me again?

The answer to both of those questions is a bona fide yes.

Simply titled SimCity, the fifth game in the series embraces everything that has made past titles a household name while at the same time infusing the experience with a healthy dose of 2013.  You’ll still lay down roads, zone areas for development, and manage everything from fire services to tax rates – but you’ll now be doing it next to neighboring cities mayored by your friends, and with deeper levels of customization than ever before.

Some of this customization becomes apparent with the first move you’ll make in your new city: placing roads.  Unlike past games roads can now be curved, windy – whatever you feel is a fit. Roads now also have a density scale attached to them; the more expensive the road, the higher density buildings it can support.  This gives players a little more control over what sort of buildings will spring up where.  Placing a high density road next to a residential zone won’t put up a skyscraper condominium overnight, but it’ll give developers the ability to knock down that ramshackle low-income family bungalow when the time is right.  Oh the humanity!

Most buildings, with the exception of those built by developers courtesy of the zoning tool, offer a good deal of customization, too.  Whereas past SimCity‘s just asked players to build more police stations, firehouses and schools to deal with increases in crime, fire, or dumbness, mayors can now upgrade their existing buildings to address the problem.  Not enough fire trucks? Buy more.  Too many students?  Build an extension.

This sort of customization spreads into almost every corner of the game.  City Hall will be awarded with upgrade opportunities which in turn let you build new departments, and those open up new buildings and gameplay options to you that will do the same.  Likewise, you can have your city specialize in a number of different endeavors from mining to tourism, and each specialization will come with its own set of buildings, customizations, goals, and upgrades.

Bonus points to developer Maxis for including the occasional citizen request that can reward players with cash, as well as letting mayors set up special events to earn extra simoleons at culturally appropriate places like convention centers and theaters.  Little touches like this make your city feel more alive and responsive than ever before.

All of the good things aside, SimCity has its share of frustrations.  While the game offers a great amount of depth and interconnected behaviors, it lacks any sort of an advanced tutorial to help you understand how to best run your city.  One might be quick to argue this is the SimCity way; that the game is as much about discovering how a city works as it is about being successful.  But when you’re several cities in and you find yourself encountering the same dilemmas and questions over and over but making zero headway towards finding the answers, that’s a fundamental flaw with the game. 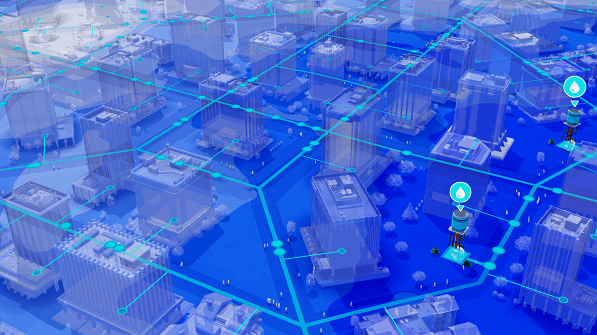 As an example, let’s talk about my experience with “Town 2: The Townening.”  Ignoring my terribly uncreative city-naming skills for a moment, Town 2 managed to become something of a hit – or at least it was as far as gamblers were concerned.  Town 2 was constructed from the ground up to be a sandless alternative to Las Vegas, and casino after casino, we were making big bucks.  I understood the basic principles behind building a thriving gambling mecca; give gamblers lodgings, build tourist attractions, airports, and convention centers to bring people in, have well-placed commercial districts to give them somewhere to shop, etc. All the pieces seemed to fit.  At least they did until I decided to build my high-end casino.  No matter what I tried, no matter how I tweaked, it just sat their empty.  It was a money pit.  I was spending tens of thousands of dollars on my own virtual Bellagio, and it was a veritable ghost town.  And the game didn’t give me any indication as to why.

Other more common elements are just as puzzling, too.  Sewage is a major problem at the start of any new city, and it demands the construction of ground polluting outlets to keep the unpleasantness from backing up into people’s homes.  Later in the game you’ll unlock the ability to build a proper sewage treatment plant that doesn’t pollute, but by then you’ve already destroyed a good chunk of the environment – and in turn, the land value of the affected area.  So how do you fix it?  No idea.

You’d think the game would have some sort of land reclamation project you could undertake, or new building to set up over the damaged area to begin a cleanup – but if there is, I’ve never been told.  Could it potentially be something that unlocks in another 100,000 citizens, after a series of building upgrades and governmental maneuvers? Absolutely.  But unless the game provides you that information, you’ll never know.  It’s this ambiguity that makes SimCity so frustrating at times.

By contrast, some of the warnings the game actually bothers to give you seem to be broken.  I’ve been told countless times I need to connect all of my streetcar stops to a line with an existing depot, and they’ve always been connected to an existing depot.  There are more than a few warnings and complaints you’ll receive like this. If you actually look into a situation, you’ll find it’s not uncommon for the game’s red flags to be flat out wrong.

The other problems with the game stems from SimCity‘s approach to multiplayer (and again, from the game’s unclear explanation of how things work).  Whether playing multiple cities in a region by yourself or with online friends, one of the coolest additions to the franchise is the idea of regional cooperation.  I can buy power from you, you can provide police service to me, our friend Bill can handle waste management for everyone… the list of options goes on and on.  This idea was touched on in SimCity 4, but it’s greatly expanded upon here.  Anything you used to have to manage on your own can now be outsourced to friends, letting you focus on what matters most to you as a mayor. 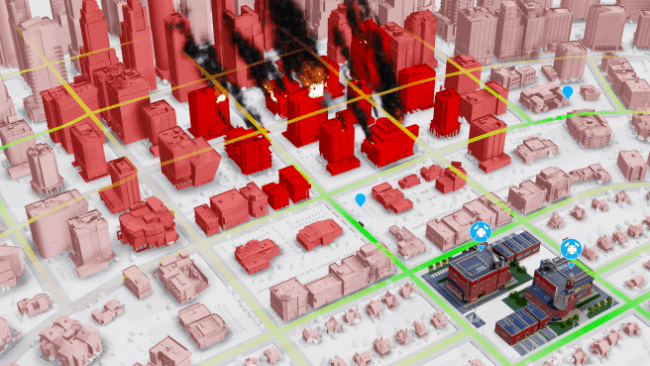 Sometimes arrangements change with no clear explanation why.  Due to the game’s well-publicized server problems at launch, my experience with regional government was largely an internal one.  To put it plainly: I was the mayor of every town.  This had the upside of making arrangements a breeze.  I didn’t need to beg a friend to spot me some fire trucks – I just switched towns and set it up myself.  So why, when I was the only mayor, did I start receiving messages like “you are no longer receiving power from Town XYZ?”  If the mayor of Town XYZ (ie me) didn’t cut me off, what just happened?  (LESS THAN FUN FACT: This exact situation forced me to build a power plant in Town 2, and this somehow correlated to a severe drop in tourism.  I’ve gone from Vegas to Reno and I have no idea why.)

Looking back, this review feels like it offers far more criticism than praise, and I’m honestly not sure the weight of my opinions offer a proper reflection of my feelings on the game.  So please, don’t let my negativity dissuade you too much.  SimCity is a fantastic city builder and a wonderful addition to the franchise, but it’s one that fails to explain itself as plainly and properly as it needs to.  You’re still going to love what’s on offer here, and you’re still going to find yourself playing until the wee hours of the morning – just don’t expect to do so without a puzzled look on your face from time to time.