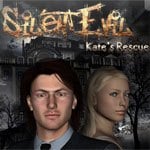 If there was a seminar on how to make a bad hidden object game, it would go something like this: “Create a vague storyline with generic characters and put them in an indeterminate setting. Have one of them vanish. Move things along using no sound and bland, static images. Finish things up by alternating between poorly-executed hidden object sequences and boring, repetitious puzzles. I’m thinking the makers of Silent Evil: Kate’s Rescue must have attended this seminar—heck, maybe they taught it.

That might sound harsh but every word of it’s true. Silent Evil: Kate’s Rescue is one of the sloppiest, poorest-quality hidden object adventures you’ll ever lay eyes on. The game starts with a guy named Dean answering his phone and having the girl (called of course, Kate) at the other end tell him she’s at a certain hotel. During the call, something goes awry and so Dean follows Kate to the hotel to find out what’s happened to her. Who these people are is a mystery that’s never explained, and their reasons for doing what they do are also omitted. Because of this, we have really no motivation for tracking Kate down and the game seems perfectly comfortable letting us feel that way.

After the five second intro, we’re tossed into a clumsy, non-interactive tutorial characterized by big, garish red circles and gigantic dialog bubbles filled with what reads like poorly-translated English. Clumsy and non-interactive actually is a good way to describe the whole game thanks to a poorly designed interface which makes most things confusing. Movement, for one thing, is strange since there’s nothing within the utterly static environments (no directional arrows or any other icons) to suggest you can move. Ditto for doors and other objects, which exhibit no iconic changes that might indicate the possibility of interacting with them. Finally, the magnifying glass icon, which in most other games means you can see something up close, doesn’t magnify anything and instead—at least for the first ten minutes of the game—only lets you gather extra hints. (After that it doesn’t do anything at all.)

In addition to Silent Evil: Kate’s Rescue having no story to speak of, it also features very little gameplay variety. Consisting of three puzzle types repeated again and again and a series of poorly-executed hidden object sequences, getting through the game is more like work than play. Puzzles (which are sadly, unskippable) require no thinking whatsoever and instead test your patience as you do things like assembling image after image from more than fifty pieces of the same shape and size. Unbelievably, the hidden object stuff is even worse than this since in most cases, the only reason you can’t find various items is because they’re covered by what looks like a soot-covered veil. Rather than cleverly hiding objects within a busy scene, Playarm opted to make object location more challenging by making scenes so dark you can’t even see what you’re doing.

On top of no story, poor interaction, dull puzzles and lazily-done hidden object sequences, you’ll also deal with other weird things like awkward “wipe” transitions, no voiceover, little music and messages that say “Level Up!” whenever you finish a hidden object scene, even though there’s no leveling mechanic in the game. Finally, (and this could be considered a benefit, all things considered) the game plays out at about two hours and has nothing else to offer once the credits roll.

You might have noticed I had nothing good to say about this game. This is unusual for me since I pride myself on looking for the good in every game and like to give credit whenever it’s due. Unfortunately, there is nothing good to say about this game and there are so many hidden object adventures out there these days, there’s no reason to waste your time or money on a bad one. Silent Evil: Kate’s Rescue is a muddled, slipshod, insubstantial mess and it proves the old adage, “anyone can make a hidden object game—but not everyone should.”