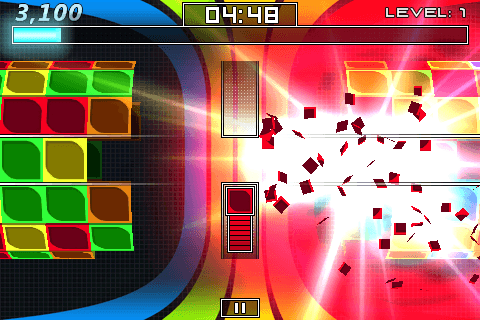 2010 has been a fantastic year for iPhone gamers that have a taste for match-3. Experiences like Babo Crash, Steamballs and Call of Atlantis have ushered in a golden era for the once stale genre, and this match-3 renaissance sees no signs of stopping. Sigma is the latest game to offer a fresh take on the classic 3-or-more formula, and it might just be the most original offering yet.

Rather than matching 3-of-a-kind on a square grid, Sigma puts players in control of two cylinders that are made up of colored blocks. The left cylinder is spun with the left thumb and the right cylinder is spun with the right. Players send blocks from one cylinder to the other with a tap of their thumb, attempting to create matches of three or more that will make those blocks disappear.

It’s a unique idea, and it’s terribly fun once you get the hang of it, but players may need to try a few rounds before they really feel comfortable. The basics are simple enough to master, but some secondary gameplay essential to a player’s success require more concentration that one might expect from a match-3 experience. For example, increasing the number of blocks in a single match is a great way to race through a level, but that means you’ll need to be spinning wheels at incredible speeds to find more like-colored blocks before the combo disappears.

Another facet that takes some getting used to is giving equal amounts of focus to both cylinders. More often than not I found myself fixated on one side of the play screen while there were half a dozen perfectly good matches waiting to go on the other.

Proceeding through the levels in the main game mirrors the level progression system in Bejeweled 2, and it’s a perfect fit here. As you make matches you’ll fill up a progress bar. Fill it before the timer runs out and you’ll proceed. Fail and it’s game over.

In addition to the main mode, Sigma offers up a time attack mode that lets players rack up a high score in 1, 5, and 10 minute intervals, as well as a multiplayer mode. Multiplayer is little more than a competitive version of time attack, but players will be able to send obstacles to block their opponents path whenever they fill up their progress bar. It’s a fun experience, but it’s local only – a strange choice for any iPhone game in 2010. Still – the multiplayer varies so little from the single player that there wouldn’t be much point in competing against someone you couldn’t taunt from across the room.

While the gameplay is completely original, the presentation seems to draw a great deal of inspiration from another classic puzzler, Lumines. The game is broken up into several levels, each comprising of five stages. Once you complete a level the game seamlessly blends into the next one, offering up a completely different graphical style and accompanying soundtrack. Not only does was this unique formula at the core of Lumines, the styles and sounds that BigStack uses in Sigma would feel right at home in the earlier Q-Games classic.

With a healthy blend of unique gameplay and stunning presentation, Sigma has earned its place among the best modern match-3 games on the iPhone. It may take a little while to get the knack of things, but once you do, you’ll find this to be an incredibly addictive match-3 experience that you just can’t put down.