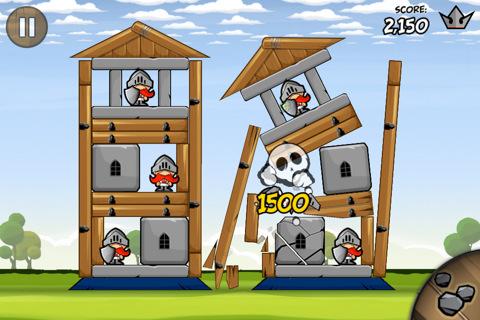 In spite of the hundreds of apps that keep coming out, Angry Birds just keeps on truckin’. But did you know that the phenomenon was, in fact, a clone of another game called Crush the Castle? The publisher of that oft-overlooked title is back with Siege Hero, and in spite of how good it is, it’s now clear why Angry Birds succeeded where Crush the Castle didn’t; Angry Birds has a soul.

Again, it’s important to point out that Siege Hero is quite a good game. It takes the real-time physics play of Angry Birds and mixes it with the demolition aspect of Implode. You lob various weapons like boulders and bombs at strategic points to destabilize and demolish structure, killing the different enemies in cute yet cartoonishly-morbid ways.

Multiple weapon types, including some clever use of materials like the fire pot which causes wood to burn, make Siege Hero a great brain-teaser. There are other obstacles too, such as unbreakable planks and innocent peasants to save. If you successfully destroy all the baddies you’ll get points based on the damage you caused, any bonus items you may have knocked down, as well as any extra unused ammo. Score well enough and you get a golden crown.

The crowns help to unlock ten bonus levels to compliment the main game’s 63. In addition to all these levels, Siege Hero has a host of achievements thanks to Game Center. The game is also teasing a new set of levels as long as (sigh) enough people give it a five-star rating.

This is a bright, colorful game, boasting lots of detail and clarity. The HD version on the iPad is particularly easy on the eyes. The larger playfield also helps with the puzzle solving, letting you aim with great precision. The iPhone version is no slouch, though. The music is limited, but orchestral, lush, and just a little bit silly in that Monty Python kind of over-the-top soundtrack from The Holy Grail. It works great.

Yet for all that Siege Hero does so well, there just isn’t a lot to do right now. You can blow through the initial 63 levels in about an hour and change. Getting all the golden crowns takes a bit longer, but it’s probably only good for an afternoon. More promised levels makes the length a bit forgivable. 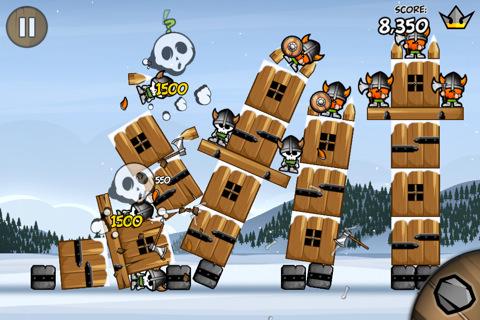 Then there’s the inevitable comparison to Angry Birds, and the story of what’s really missing in Siege Hero. Angry Birds has characters that are original designs, not really derivative (even if the gameplay might be) along with some seriously funny use of sound. In short, as mentioned previously, it has a real soul. Siege Hero, despite the quality of the production, doesn’t have anything that really makes it or its characters stand out. The enemies in the three areas (samurai, vikings and knights) don’t do anything. They’re just moribund, standing there. Sure, the pigs were stationary too, but at least they had a goofiness that made you want to crush them for taking the eggs. The bad guys here are mere targets.

Rather than bemoan the previous lack of success, Siege Hero needs to own up to what it’s missing. There’s a really fantastic game that could easily rival Angry Birds in terms of addictiveness. With enough level updates, there could definitely be something here. But until Siege Hero finds a way to give it a real distinctiveness, there’s not enough here to help it stand out in the crowd. That’s too bad, too, because it really should.